Broner meant ‘no disrespect’ to Mayweather 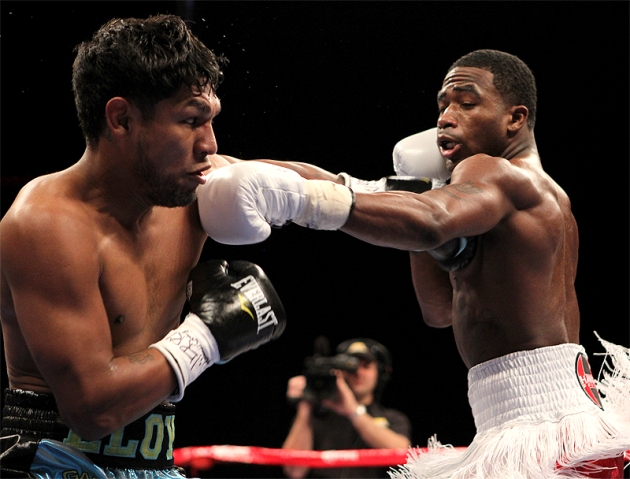 Wanting to clarify comments he made in regard to his stylistic boxing idol, Floyd Mayweaer Jr., former WBO junior lightweight titleholder Adrien Broner told RingTV.com that he meant “no disrespect to Floyd.”

During an interview with RingTV.com in which Broner (24-0, 20 knockouts) said “I look up to” Mayweather (43-0, 26 KOs), the 23-year-old Cincinnati resident also said he would have beaten the five-division eight-belt titleholder when Mayweather was 23.

“When he fights, I root for him, and when I fight, he roots for me. No disrespect to Floyd. We’re in different eras. You know, I’m in the modern era, and he’s got his own era. We’re both superstars. We’re never going to fight.”

Broner will be making his first appearance in Atlantic City, N.J., when he challenges WBC lightweight titleholder Antonio DeMarco (28-2-1, 21 KOs) at Boardwalk Hall on Nov. 17 in an HBO-televised bout.

DeMarco, 26, will be after his sixth straight win and his fifth by stoppage during that run when he defends his WBC belt against Broner. The veteran southpaw is coming off a 44-second knockout of John Molina on Sept. 8.

DeMarco has not lost since suffering a ninth-round TKO to the late Edwin Valero (27-0, 27 KOs) in February of 2010, when DeMarco failed to earn the WBC’s lightweight belt in the final bout Valero’s career.

Meanwhile, Broner, nicknamed, “The Problem,” is coming off his fourth straight stoppage victory with an HBO-televised knockout of Vicente Escobedo in Broner’s hometown of Cincinnati in July.