Can Molina upend Khan’s quest for another title? 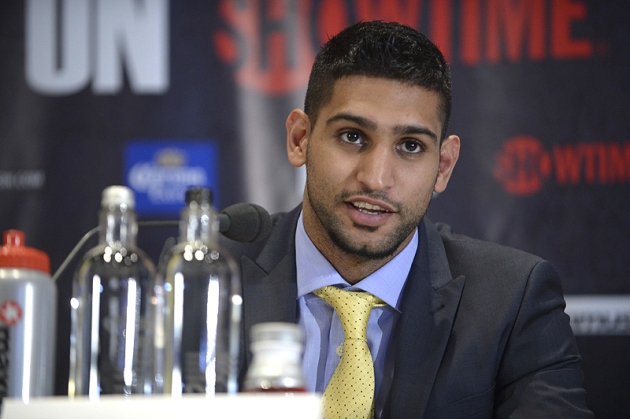 Former IBF/WBA junior welterweight titleholder Amir Khan, of Bolton, England, has officially announced his return to the ring for Dec. 15 at the Los Angeles Sports Arena with the goal of becoming “a world champion again.”

Khan, who turns 26 on Dec. 8, will be in his first fight under 2011 Trainer of The Year Virgil Hunter against Molina, having left Freddie Roach after 10 bouts and an 8-2 mark that includes four stoppage wins.

Khan’s transition comes in the wake of a fourth-round knockout loss to Danny Garcia in July.

“I am looking forward to getting back in the ring and continuing my career. I believe in myself and my abilities,” said Khan during a Tuesday press conference at The Mayfair Hotel in London announcing their fight, along with Golden Boy Promotions President Oscar De La Hoya.

“With each fight I learn what I am capable of doing and these opportunities afford the chance to better myself and continue to comeback stronger than before.”

Khan-Molina will be televised live on Showtime in the United States, as well as live on Sky Sports 1HD in the United Kingdom at 1 a.m. GMT on Dec. 16.

“This fight represents a major crossroads in each fighter’s career. For Khan, this is an opportunity to demonstrate that he is still one of the elite fighters in his division,” said Stephen Espinoza, executive vice president and general manager, Showtime Sports.

“For Molina, this is a chance to knock off one of the biggest names of this era and become a player in the deep 140-pound division. Showtime has upped the ante this year. This is the perfect end to an incredible run of Showtime Championship Boxing events in 2012.” 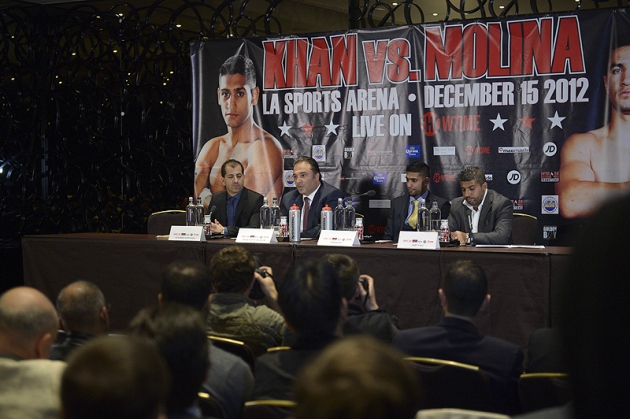 Khan began working with Roach following his 54-second knockout loss to Breidis Prescott as a lightweight in September of 2008. From there, Khan won eight straight fights, four of them by knockout, and earned two major title belts.

“Amir is eager to regain his place at the very top of the 140-pound division. This path starts against Carlos Molina, who is an undefeated fighter and someone who Amir knows he will need to be at his very best to overcome,” said Asif Vali of Khan Promotions.

“This is going to be an exciting matchup between two talented fighters and one which we believe will lead Amir to another chance at world title glory.”

In hiring Hunter, Khan will be coached by the man who has guided RING, WBA, WBC and Showtime Super Six World Super Middleweight Boxing Classic Champion Andre Ward, a 2004 Olympic gold medalist who was named Fighter of The Year for 2011.

“I fight for all of the fans that continue to support me regardless of outcome,” said Khan. “I will not be satisfied until I give them what they want. I want to be a world champion again and that is what the goal is starting with this fight against Molina.”

“I look forward to this fight and the opportunity to fight someone like Amir Khan. I expect him to fight with a new intensity,” said Molina. “But I will be prepared and ready. I am the undefeated fighter in this fight and I do not plan on that changing.”

Golden Boy CEO Richard Schaefer told RingTV.com in an earlier interview that the pro debuts of fighters from the 2012 Olympic Games could also happen as part of the Dec. 15 event, in accordance with a “Night of Olympians” and an agreement between Golden Boy, Showtime Sports and CBS Sports.

Golden Boy matchmaker, Eric Gomez, and Schaefer said that among those likely to appear on one of the platforms is unbeaten heavyweight prospect Deontay “The Bronze Bomber” Wilder, of Tuscaloosa, Ala., who will be after his 26th knockout in as many wins without a loss. 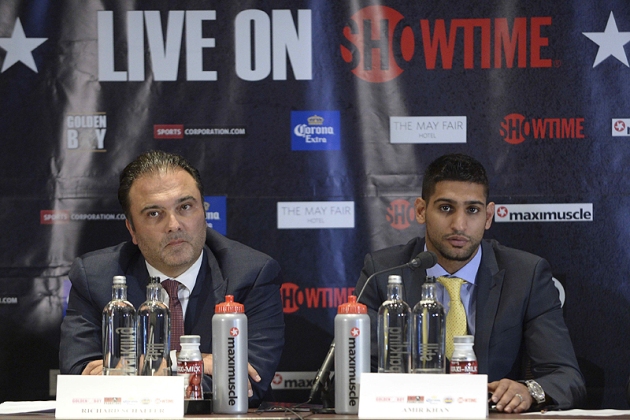 Wilder is co-managed by Shelly Finkel and Jay Deas, the latter of whom also trains Wilder with assistance from former Olympic gold medalist and ex-titleholder, Mark Breland, and, Russ Anber.

A 2008 Olympic bronze medalist who turns 27 on Oct. 22, the 6-foot-7 Wilder is coming off a second-round knockout over previously undefeated Damon McCreary (14-1, 10 KOs), of Detroit, on Sept. 8. McCreary had come up with stoppage victories in three of his previous four fights.

Prior to facing McCreary, Wilder scored a first-round stoppage of Trinidad and Tobago’s Kertson “The Warrior” Manswell on Aug. 4 which had followed June’s third-round knockout of former heavyweight title challenger Owen Beck.

“I am looking forward to putting on this show, not only for boxing fans watching across the country and in the U.K., but also for the fans who will be able to attend and be part of this special Saturday of boxing,” said De La Hoya.

“Amir Khan is a fighter through and through and I believe he is taking the necessary steps to continue his career and become a champion again. Carlos Molina is not going to make that task an easy one as he is undefeated and always prepared to fight. We will see what happens on December 15.”

Khan and his younger brother, Haroon, 20, fought off a potential car jackers who attempted to steal Khan’s Range Rover on Monday. According to a report in The Sun, at least six men used a 4×4 to block the Khan’s path but were beaten back.

“These guys tried to jump Amir and his brother, but they picked on the wrong blokes…They parked their car in front of the Range Rover. At least one had a cosh,” said a witness, according to The Sun.

“One slapped Amir and clipped him on the lip, but Amir pulled back and knocked him out cold. Then five of them went for Amir and Haroon, but they stood their ground, and these guys got dropped one by one. They left these men with cuts and bruises, but all they were doing was defending their property.”

One of the fighters’ rear windows was apparently smashed during the retreat. Police are investigating the incident.