Fighters show each other respect at Alvarez-Lopez final presser 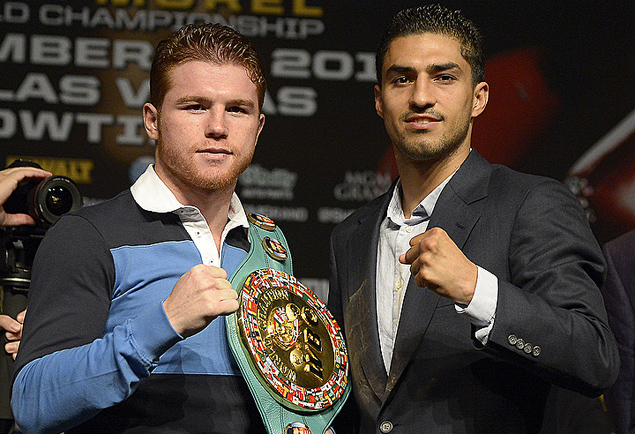 LAS VEGAS – Eight world-class fighters, including three major titleholders, making up the four co-main events of Showtime’s big “Knockout Kings” show got together on the stage of the MGM Grand’s Hollywood Theatre for the final press conference for the Mexican Independence Day weekend event on Thursday.

The total time for the gala gathering of sports media and boxers: one hour.

It moved so fast that Oscar De La Hoya, president of Golden Boy Promotions, which is promoting Saturday’s stacked card, joked that they set a Guinness World Record for shortest boxing press conference ever.

“Don King has the record for the longest,” De La Hoya quipped.

The reason for the fast pace was simple: All of the fighters on the card, which takes place at the MGM Grand Garden Arena – Saul Alvarez, Josesito Lopez, Jhonny Gonzalez, Daniel Ponce DeLeon, Marcos Maidana, Leo Santa Cruz and Eric Morel – respect who they are fighting and are grateful to be on the high-profile show.

So each fighter was short and sweet when it was his turn at the podium. Each basically said the same thing: I’m in great shape and I’m going to give 100 percent on fight night.

“I was hoping that nobody would talk any trash and they didn’t because they are respectful professionals and they know they will have to fight hard on Saturday night,” De La Hoya said at the end of the presser. “If they do any trash talking they will do it in the ring with their fists.”

Alvarez, the unbeaten Mexican star who defends his WBC 154-pound title against Lopez in the main event, is the only overwhelming favorite on the card.

But the 22-year-old boxer-puncher has vowed not to overlook his opponent, who scored one of the upsets of the year so far when he stopped Victor Ortiz in June.

“Thank you all for being here,” Alvarez said. “This is a special moment for me. I remember seeing great fighters, like (Floyd) Mayweather, standing on this very stage and talking to the media and now I’m here.”

If “Canelo” wants to stay where he is and one day challenge the likes of Mayweather he will have to win and look impressive against Lopez, which won’t be easy.

“Of course, I want to fight Mayweather one day – he’s No. 1 pound for pound – but I can’t overlook Lopez. He’s tough, he’s fast and he’s hungry.”

“Being the underdog doesn’t bother me. I’ve been in this position my whole career, but now I have added motivation.”

Actually, all of the fighters on the Showtime-televised portion of the card have added motivation. Fans watching the broadcast will be able to text in their vote for the “KO of the Night” award, a $100,000 bonus given to the fighter who scores the best knockout. The winner will be announced on air before the end of the broadcast.

It’s a most welcome bonus to heavy handed fighters on the card, such as the two veteran featherweights from Mexico who make up the co-featured bout. 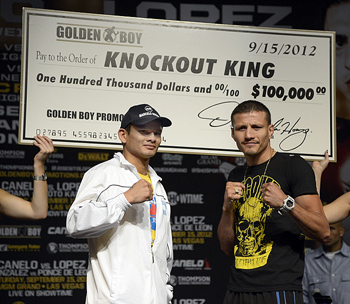 Gonzalez, the WBC beltholder, has scored 45 KOs in his 52 victories. His challenger, DeLeon, a former 122-pound titleholder, has 35 stoppages among his 43 victories.

Many fans expect Maidana, a relentless slugger from Argentina who has won 28 of his 31 victories by knockout, to come away with the most eye-catching KO on Saturday.

More than 40 percent of the fans who voted on RingTV.com’s poll asking who wins the “KO of the Night” award picked Maidana, who faces Soto Karass in a welterweight bout.

Soto Karass, a 147-pound fringe contender who was stopped by Gabriel Rosales in January but has won his last two bouts, has not received any votes. That might be a mistake given the Mexican veteran’s form in his last bout, a fifth-round TKO of Euri Gonzalez, and the fact that he’s the naturally bigger man.

Most of Maidana’s career has been at 140 pounds, and he did not look good in his last bout, a one-sided decision loss to Devon Alexander in what was the welterweight debut for both fighters in March.

The opening bout of the broadcast, the IBF bantamweight title bout between 24-year-old beltholder Santa Cruz (20-0-1, 11 KOs) and Morel (46-3, 23 KOs), a 36-year-old veteran who has never been knocked out, is the fight most likely to go the distance.

However, both fighters will likely give their all in the crossroads match.

Morel, a former flyweight titleholder from Puerto Rico, knows he will have to win convincingly to beat a defending beltholder who was born in Mexico on Mexican Independence Day weekend. He also understands that this fight is probably his last shot at a major title.

Santa Cruz, a pressure fighter who specializes in volume punching, wants an impressive showing before tossing his hat into the red-hot junior featherweight division.

The Southern Californian will have more eye balls on him on Saturday than ever before.

Apart from the live audience, which is expected to exceed 15,000, and Showtime subscribers, Santa Cruz and all of the fighters in the co-featured bouts will be simulcast live on Telefutura, one of the largest Spanish-language basic cable networks in the U.S.

The entire card will also air on Televisa, the largest network in Mexico.