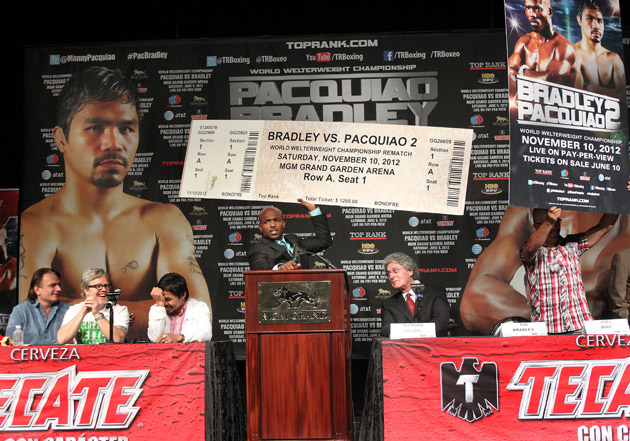 LAS VEGAS — Angry that eight-division titlewinner Manny Pacquiao has chosen a fourth bout with Juan Manuel Marquez over a rematch with him, Tim Bradley said Pacquiao is afraid of him and has called out Floyd Mayweather Jr.

Marquez (54-6-1, 39 KOs) lost by disputed majority decision in November to Pacquiao, with whom he has also battled to a draw and lost by split-decision previously.

Marquez bounced back from the most recent loss to Pacquiao with April’s unanimous decision over Sergei Fedchenko for the WBO’s interim junior welterweight belt, which has since been “upgraded” by the organization to full title status.

Given that Mayweather (43-0, 26 KOs) already has vanquished Marquez by one-sided unanimous decision, Bradley wants to test his skills against the unbeaten, five-division, eight-belt winner.

“My thoughts on the whole selection process was that I didn’t like the whole waiting around and the whole running around thing that Pacquiao did. So, we all know that Manny’s truly afraid to fight me again,” Bradley said of Pacquiao, who will face Marquez on Dec. 8 at the MGM Grand in Las Vegas.

“So how bout I fight Floyd Mayweather? I guess that Manny’s fighting a guy that really beat him, and Floyd’s already beaten the guy that is getting this next fight with Manny. So the only guys that’s left is Tim Bradley, so Floyd, let’s do it.”