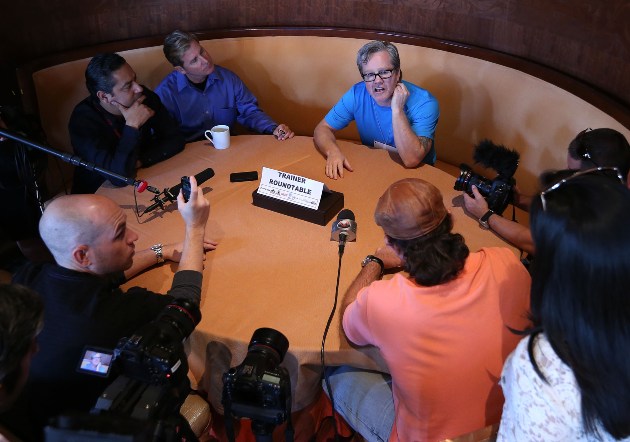 LAS VEGAS — Five-time Trainer of the Year Freddie Roach discussed the deal struck by his fighter, Manny Pacquiao, to take a fourth bout with Juan Manuel Marquez at the MGM Grand on Dec. 8.

Roach is in town for Saturday night’s HBO Pay Per View-televised card headlined by WBC middleweight titleholder Julio Cesar Chavez Jr., whom Roach will guide in a defense against RING champion Sergio Martinez at the Thomas and Mack Center.

During a round table interview with members of the media on Thursday, Roach said that he was not involved in the finalizing of Pacquiao-Marquez IV, which happened as a result of a Wednesday meeting between Pacquiao’s advisor, Michael Koncz, and Top Rank CEO Bob Arum.

“Manny knew that I would have preferred the rematch with Bradley, because I had talked to Michael Koncz on the phone, and I texted Manny, and Manny texted me back,” said Roach.

“I had heard that Marquez was chosen once, and then they changed that their minds to Bradley a day or two ago. Then, they finally came to an agreement with Bob to fight Marquez.”

Roach said that he believed money was a “huge” factor in Pacquiao’s decision.

“Let’s be honest, it was a huge factor. Bradley doesn’t bring the people that Marquez does,” said Roach. “Marquez has the pay per view following, and I think that at their last fight, the Mexican’s outdrew the Filipinos by a large, large margin.”

Marquez lost in November to Pacquiao, who was the official winner by majority decision, with ringside judges Glenn Trowbridge and Dave Moretti turning in scores of 116-112 and 115-113, respectively, while Robert Hoyle called it even at 114-114. Public opinion, however, was largely in Marquez’s favor.

Marquez bounced back with April’s unanimous decision over Sergei Fedchenko for the WBO’s interim junior welterweight belt, which has since been “upgraded” by the organization to full title status.

The duo’s previous two fights ended in a draw and another split-decision loss for Marquez.

“I think that we start out this fight down three rounds, because a lot of people thought Marquez won the last fight, and judges are human. They’re going to favor the other guy early,” said Roach.

“Manny is going to really have to beat this guy convincingly or knock him out. I told Manny that it’s about time and that we’re due for a good knockout any way, and I’ve been pushing for that for a little while. To be considered the best fighter, pound-for-pound, he needs that.”