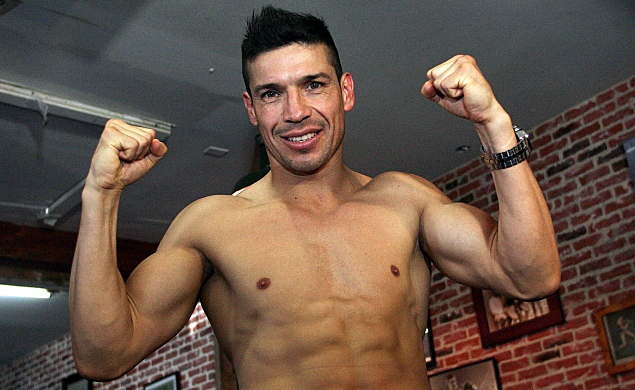 Sergio Martinez’s promoter, Lou DiBella, isn’t sure his fighter can get a fair shake if his Saturday showdown with Julio Cesar Chavez Jr. goes to the scorecards. Martinez says his fists will take the judges out of the fight.

“I know who the better fighter, the better boxer and the better athlete is,” DiBella told a small group of boxing writers during Martinez’s media day the Fortune Gym on Monday.

“But Chavez is bigger and he’s strong, man. He’s really strong, and he’s got a chin. This is a tough fight. I know it’s Sergio’s style to box with his hands down by his waist so he can lure the other guy in but every time I see him do that in the ring I s__t my pants. It only takes one clean punch from a big, strong guy like Chavez to turn a fight.”

Chavez does just not possess a large body, his name – that of his father, Mexico’s most beloved boxing champion – is big, especially in a fight that takes place on Mexican Independence Day weekend.

Martinez has caught the short end of the stick twice before in high-profile distance fights – his dubious majority draw to Kermit Cintron and his scintillating majority decision loss to Paul Williams in 2009 – and neither fighter was as popular as Chavez.

DiBella knows the judges will give “Junior” the benefit of the doubt in every close round of the middleweight championship, which takes place at the Thomas & Mack Center and will be televised live in the U.S. on HBO Pay Per View. 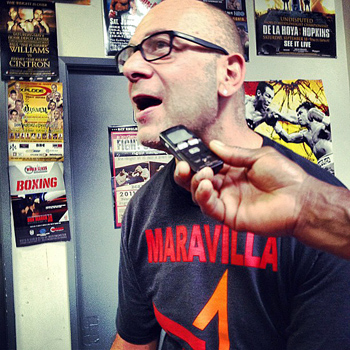 “Chavez is not the best fighter Sergio has been in with but this is the toughest night of his career,” DiBella said. “The arena will be packed with Mexican fans all cheering for Chavez. They’ll go crazy every time Chavez does anything.

“Let’s put it this way, if my guy legitimately wins eight or nine rounds in a distance fight I’m going to be nervous before the decision is announced. If he only wins seven rounds I don’t expect to win the fight.”

DiBella’s already edgy nerves were frayed when a car outside his fighter’s home in Oxnard, Calif., was vandalized and verbal threats were made to the Argentine southpaw two weeks ago. The isolated incidents caused the cancelation of Martinez’s media workout in Oxnard, where he trains, and briefly suspended all of his public appearances until a security team could be added to his camp.

Martinez was flanked by two body guards in suits and sunglasses at Monday’s sweltering media gathering.

DiBella is aware the threats and vandalism were likely made by bonehead fans, but he doesn’t want to take any chances with his fighter’s safety.

His paranoia was fueled when a boxing writer, MaxBoxing.com’s Gabe Montoya, told him that WBC president Jose Sulaiman said he was betting on Chavez during an internet radio interview.

“When the president of the organization sanctioning the bout is betting on Chavez you’re damn right I’m concerned about the scoring,” DiBella bellowed. “This blows my mind! That interview should be posted everywhere. If this was 15 years ago, when newspapers still gave a damn about boxing, every boxing columnist in the country would be ripping Sulaiman to shreds.

“If this was the NFL there would be an FBI investigation!”

Montoya tried to explain that Sulaiman, a guest on the Leave It In The Ring radio show he co-hosts with David Duenez, told Duenez – who is picking Martinez to win – that he’d buy him dinner if the Argentine beat the Mexican.

“I don’t care that if the bet was made over dinner,” DiBella said as he left the Fortune Gym. “This guy is involved with picking the officials!”

Later in the day, perhaps after he had an opportunity to listen to a podcast of the show that took place in July, DiBella calmed down.

“I didn’t realize Sulaiman said he’d buy the guy dinner if Martinez won,” DiBella told RingTV.com by cell phone. “That’s different. It’s not smart to say that, especially on a radio show, but it’s not the same as betting money on Chavez.”

Still, it doesn’t make DiBella feel any better about the outcome of a distance fight knowing that Sulaiman unabashedly favors Chavez and wants the son of the Mexican legend to win.

Despite needing two guys dressed like secret service agents by his side, Martinez was the complete opposite of DiBella on Monday – relaxed and 100-percent confident of victory.

“Why would I be worried about winning a decision?” Martinez said through his translator. “It won’t go to the scorecards.”