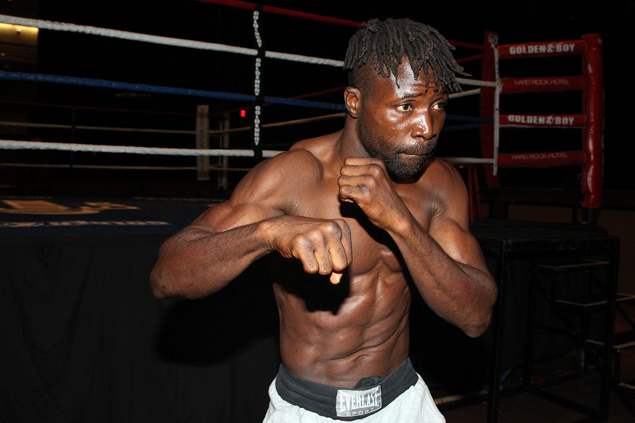 At 32, Olusegun Ajose finally has the marquee fight he has desperately yearned for. After Randall Bailey pulled out of his Showtime bout with Devon Alexander, Ajose’s junior welterweight match-up with Lucas Matthysse was elevated to the headline bout of Saturday’s telecast, his first-ever main event on an international broadcast.

Ajose (30-0, 14 knockouts) has contested most of his boxing career in relative obscurity. With his first (and perhaps only) chance at the spotlight on Saturday at the Hard Rock Hotel and Casino in Las Vegas, he hopes to open eyes and show people what he’s known all along: that he’s one of the best in the 140-pound division.

“I’ve always challenged the best. The reason I haven’t fought the best is I’m too good for my own good,” Ajose told RingTV.com. “It’s special to me that I’m getting an opportunity to showcase my talent, to show America what I got. I’ve been waiting a long time.”

But the Lagos, Nigeria native will be taking a monumental step-up in class. To date, Ajose (THE RING’s No. 9-rated junior welterwieght) has feasted mostly on subpar opposition with his best victory coming against Frenchman Ali Cheebah on ShoBox last September (his last fight). He’s been inactive while Matthysse, 29, has fought three times since then, his most recent bout a notable knockout of Humberto Soto in June.

The power-punching Argentine has fought a much higher class of competition, with questionable losses to Zab Judah and Devon Alexander. The Alexander fight in particular was dubious, as most observers thought he clearly won the fight. Ajose isn’t worried about the chasm in competition, pointing out that Matthysse (THE RING’s No. 1-rated junior welterweight) didn’t get the decision in either fight (though Ajose thought he won both contests).

“Every time he steps up he loses”, said Ajose, who moved to New York a year-and-a-half ago from London. “He stepped up to Devon, he lost. Stepped up to Judah, he lost. I think he won those fights but he lost eventually.

Matthysse (31-2, 29 KOs) is known for his brute power. Since arriving on the American scene, he’s dropped Judah and Alexander and possesses a dazzling 85.29 knockout percentage. Showtime analyst Steve Farhood recently named Matthysse No. 3 on his list of boxing’s top one-punch knockout artists.

“I’m not worried about his power, he can punch just like I can punch,” said Ajose, who trained in New York, Las Vegas and Nigeria for this bout. “I’ll figure him out once I get in the ring – I’ll improvise.”

Ajose’s co-promoter Gary Shaw (partnering with Lou DiBella) is elated that Ajose will now be on the “big stage”. He referenced the time his fighter Vic Darchinyan’s bout was elevated to the main event, saying his career “flourished” after his knockout of Luis Maldonado on Showtime.

“Everybody’s been ducking him, he’s been chasing his opportunity for years with the WBC,” said Shaw. “This is the closest Lou and I have got to making a [big] fight. He’ll win the fight, no question about it, and then we’re going to chase everybody at 140 pounds.

“He’s got a lot of boxing skills; the world just hasn’t seen how good he is. On Saturday night, they’ll see how good Ajose is.”

Ajose feels ready for the limelight and is anxious to prove his mettle and skills to the American public. A chance he feels is long overdue.

“I just want to box. If you say you’re a good boxer you want to fight good boxers,” said Ajose, who represented Nigeria at the 2004 Olympic Games. “Not getting the opportunities was really frustrating. But that is boxing. Now I have an opportunity to showcase my talent, to show people how good I am, and I’m going to take it.”