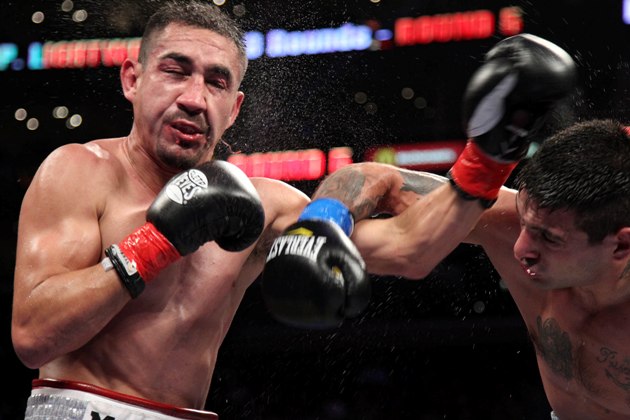 The WBC junior welterweight eliminator between Lucas Matthysse of Argentina and unbeaten Nigerian southpaw Ajose Olusegun has been elevated to the Showtime-time televised main event of a Sept. 8 card that will take place at the Hard Rock Hotel and Casino in Las Vegas.

The change is the result of a back injury suffered by IBF welterweight belt-holder Randall Bailey, which forced the postponement of his defense against former IBF and WBC junior welterweight titleholder Devon Alexander.

“We’re disappointed that Devon will not have the opportunity to fight Randall Bailey for the title this weekend, but we’re hopeful that Randall will recover quickly so we can reschedule this great fight,” said Richard Schaefer, CEO of Golden Boy Promotions.

“As every cloud has a silver lining, we’re excited that the explosive September 8 match-up between Ajose Olusegun and Lucas Matthysse will now be in the spotlight headlining a great night of boxing.”

Plans are for Bailey to defend against Alexander on either Oct. 20 at The Barclays Center in Brooklyn, N.Y., or else on Oct. 27 at the Honda Center in Anaheim, Calif., according to Schaefer.

“Unfortunately, Randall Bailey suffered a severe lower back sprain. The orthopedic specialist determined that Bailey would not be able to fight on Sept. 8, and requires a period of rest. He’ll be returning to the specialist on Wednesday,” said Lou DiBella, Bailey’s promoter.

“But the injury is not expected to sideline him for an extended period of time. We’re pleased that there is a terrific fight between Ajose Olusegun and Lucas Matthysse to move into the main event position. This fight between two of the best 140-pounders in the world will establish the challenger for the winner of the October 20 showdown between Danny Garcia and Erik Morales.”

On an Oct. 20 show that is being billed “Brooklyn Pride,” the headliner is a rematch between RING, WBA and WBC junior welterweight champ Danny Garcia and four-division titlewinner Erik Morales.

“This is unfortunate for Randall, Devon and the fans who are looking forward to their fight. We would still like to televise Alexander vs. Bailey, but of course we have to wait for further information on Bailey’s injury before we can talk about that,” said said Stephen Espinoza, executive vice president and general manager of Showtime Sports.

“In the meantime, we have a fierce matchup between Olusegun and Matthysse on our hands for next Saturday. These men have been training for months and we all know what they bring to the ring. Now, they have the spotlight all to themselves. I am looking forward to that fight.”

The co-feature for the double-header has yet to be determined.