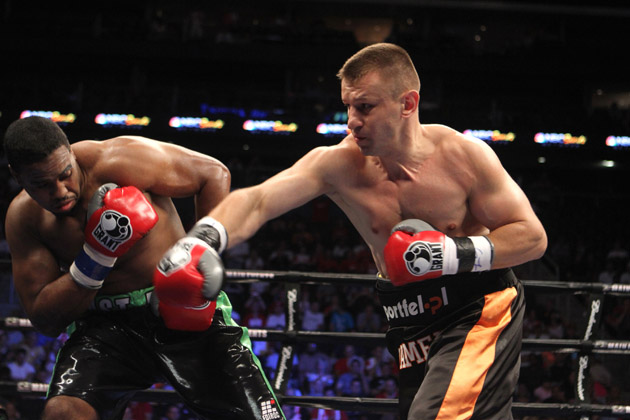 Former light heavyweight and cruiserweight titleholder Tomasz Adamek expects to be in tough opposite journeyman Travis Walker, whom he will face on Sept. 8 at The Prudential Center in Newark, N.J., in a contest that is being billed, “The Ironbound Throwdown,” by Main Events President Kathy Duva.

Adamek (46-2, 28 knockouts), who turns 36 in December, will be fighting for the 10th time at the venue, where he is unbeaten in his past nine appearances. Walker (39-7-1, 31 KOs) is coming off a sixth-round knockout of Australia’s Kali Meehan in March.

“I’ve seen a couple of his fights. He’s a strong guy. He loves hard fights,” said the nearly 6-foot-2 Adamek, who will yield three inches to the nearly 6-5 Walker.

“I love hard fights too, because it is good for my fans. I don’t want to give boring fights. If somebody runs and doesn’t fight, people do not like that. I want a tough fight because people love this.”

Adamek’s trainer, Roger Bloodworth, says his fighter has to respect Walker’s combination of aggression and power.

“Tomasz picks tough opponents. Some people don’t think this guy is tough, but he is tough. I watched him knockout Kali Meehan. He’s still got a good right hand, and if you get touched by that right hand, you could go. So Tomasz is going to have to try to avoid this and land his own punches,” said Bloodworth.

“It’s not rocket science. Walker is gonna come. I don’t expect him to try to be a ballet dancer. I think he’s going to come to Tomasz with bad intentions, so Tomasz is going to have to be on his ‘A’ game, avoid that big right hand, and we’ll see what happens.”

Since falling to WBC titleholder Vitali Klitschko by 10th-round knockout in September, Adamek has won two straight unanimous decisions over Nagy Aguilera and Eddie Chambers in March and June, respectively.

In the meantime, Adamek has been working to tweak his style and his skills with Bloodworth.

Click here for a video of a recent Adamek training session.

“We are fixing mistakes from the last fight. Every fight brings me something new. We are training every day. Like Roger says, ‘every day you learn a little bit more,'” said Adamek. “I feel much better with every fight. After I win this fight and the next fight, I hope to get title fight next year.”

Prior to Klitschko, Adamek had not lost in four years and seven months, the last man to defeat him being Chad Dawson by a unanimous decision that dethroned Adamek as WBC lightheavyweight beltholder in February 2007.

Adamek claims that he was weakened by extreme weight loss against Dawson, and rebounded with a seventh-round stoppage of cruiserweight Luis Andreas in his very next fight in June 2007.

“Every fight that Tomasz has is with the intent of getting back into a title fight. I mean, why fight ‘Joe Smith’ or ‘Bobby Jones’ or just a body? What does it mean? It doesn’t mean anything,” said Bloodworth.

“You are talking about a fighter [Adamek] that has only lost two fights, and they were two of the best fighters in the world. He is far from done. Even if something were to happen here, it’s a learning experience. He learned a lot from the Klitschko fight, and if he performs well, he’ll bring it to this fight.”