Ward carries underdog mentality into his showdown with Dawson

OAKLAND, Calif. – Nestled in a run-down section of the city sits a nondescript warehouse on 35th Avenue. It’s a dead-end road with dilapidated homes that sits off the freeway. It seems like the warehouse could be home to just about anything, but the myriad of TV trucks parked outside signifies something greater.

Inside a large banner hangs above a boxing ring that reads “Home of 2004 Olympic Gold Medalist Andre Ward.” The stampede of media is here on this Tuesday to see Ward hold court in his hometown ahead of his highest-profile fight to date, which will take place just miles away at the Oracle Arena. 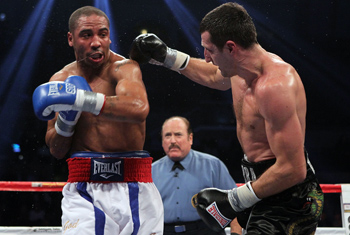 Ward (25-0, 13 knockouts) looked trim and fit but refused to reveal his weight. His long-time trainer Virgil Hunter keeps sparring confidential (declining to even name sparring partners), so the 28-year-old champ displayed his readiness for his HBO debut by working the heavy bag, speed bag and double-end bag.

He drilled the heavy bag with combinations, deftly ducking and sliding to his right after thudding power shots. He precisely controlled the double-end bag, working on his timing.

Ward is an elite fighter and a decided favorite over Dawson (37-1, 17 KOs), yet he still feels like the underdog at heart – still seeking vindication. Ward has a chip on shoulder, perhaps going back to his entrance in the Super Six tourney, when he was an afterthought.

“I don’t look at odds, I don’t know who’s supposed to win this fight,” said Ward, who is actually more than a 3-1 favorite in most sportsbooks. “A reporter can ask me a certain question and that will fuel me. They still don’t believe. Of course they have to give you a certain amount of respect if you win. But then it’s the questions that come with it: ‘What about this, what about that?’

“I do know that [Team Dawson] doesn’t think much of me,” said Ward. “But I have an opportunity to change that come Sept. 8. The biggest mistake Team Dawson is making is when they look at the tape and say ‘nothing jumps out at them, nothing impresses them.'”

It will be just shy of 10 months since his bout with Froch, but Ward feels like the long layoff will serve him well. The Super Six pitted him against top guys (Allan Green not withstanding) and he feels rejuvenated now that old (undisclosed) injuries were able to heal.

“I was just on the grind. It’s not just the fight that we have to deal with, we have to deal with the training camp,” said Ward, the Boxing Writers Assoc. of America’s Fighter of the Year for 2011. “So I needed that rest – physically, mentally. Chad has had a fight in-between against Bernard [Hopkins]. This isn’t the first time I’ve been off eight or nine months, it shouldn’t be a problem.”

Ward is excited to be fighting in front of his hometown fans, but cautions that it isn’t the advantage many believe it to be. He has to deal with added distraction and the reality that his family (and newborn daughter) are just miles away, yet unable to see him as he’s ensconced in camp.

“A lot of people think it’s a given when you fight at home, like it’s an easy thing, but it’s not,” said Ward, a San Francisco native. “There’s a lot of pressure, but good pressure when you fight at home to defend the house.  I consider Oracle Arena my house and the Bay Area as a whole my house. I’m doing what I always do and I’m preparing well and I want to put on a great show for the fans.”

He’s less than three weeks out from a marquee fight – champion versus champion. He knows it’s a special fight and is eager for the moment the bell rings.

“It’s a tough fight for both men,” said Ward. “Not just me dealing with Chad Dawson, but Chad Dawson dealing with me and vice versa. That’s the beauty of the fight and it sells itself because you got two young guys who are well-decorated in terms of our accomplishments, and we’re literally putting it all on the line at the peak of our careers. I don’t think anyone can ask for anything more than that.”