Rigondeaux’s attorney: ‘This thing is far from over’ 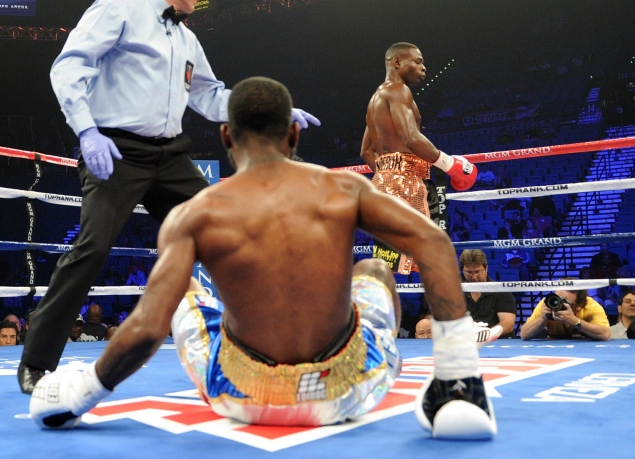 The Miami-based attorney of southpaw WBA junior featherweight beltholder and two-time Olympic gold medalist Guillermo Rigondeaux has filed an “emergency” motion on the fighter’s behalf which seeks to allow him to defend his belt against Robert Marroquin on Sept. 15.

Rigondeaux-Marroquin was scheduled for the undercard of an HBO Pay Per View-televised main between Julio Cesar Chavez Jr. and Sergio Martinez at the Thomas and Mack Center in Las Vegas, but is in jeopardy, according to Pat English, an attorney for Rigondeaux’s Irish promoter, Gary Hyde.

English said he received the written order from Miami-Dade County judge David Miller on Thursday which forbids Rigondeaux (10-0, 8 knockouts) from facing Marroquin (22-1, 15 KOs) because the bout was not approved by Hyde.

“The original hearing was on our motion to strike [Hyde’s contract,] so now we have a motion for a rehearing that is pending,” said Guy Spiegelman, Rigondeaux’s attorney. “It’s a procedural thing. The court will probably consider it. I don’t know if the court will reverse itself, but this thing is far from over.”

In the meantime, however, Marroquin has reportedly already begun the search for a new opponent, saying that his fight with Rigondeaux has been “canceled.”

“Unfortunately my title shot against Rigondeaux has been canceled. However, I’m still in the gym working hard awaiting my new opponent,” said Marroquin, of Dallas.

“We’ll only have 1-2 weeks to prepare for a new opponent. If I wind up fighting a right-handed opponent, I need to prepare for that and change the way I’m training since everything I’m doing now is for fighting a southpaw.”

But Spiegelman said Hyde had agreed to share in a five-bout promotional agreement with Top Rank, which is handling the Chavez-Martinez card. Spiegelman argues that Rigondeaux-Marroquin is the final bout of the five-fight pact, and that Hyde is trying to extend his contract as a result.

“[Hyde] is trying to force Rigondeaux to take other promotional deals so as to extend his contract with him as a manager. I just want to determine [Rigondeaux’s rights,]” said Spiegelman.

But Miller has denied Rigondeaux’s motion to strike Hyde’s contract, and enforced Hyde’s request for a two-year injunction against Rigondeaux “prohibiting him from working in the boxing industry except under the management of Gary Hyde.”

“This is the last fight for Rigondeaux that Top Rank is doing to fulfill its contractual obligations. The thing that is baffling to me is that Hyde’s going to get paid, so it’s not like he’s going to get cheated,” said Spiegelman. “So I don’t understand where the irreparable injury is, which is standard for an injunction. Why does he not want the fight to go forward?”

Hyde contends that his contract has been in place with the fighter since he defected from Cuba in 2007, that Top Rank placed the bout on the Chavez Jr.-Martinez card with no contract, and that the promotional company scheduled the Marroquin fight without his permission in spite of “lucrative offers” from other promoters.

English said that Hyde’s automatic two-year contract extension went into effect when Rigondeaux dethroned Rico Ramos for his current crown in January. But Spiegelman said he believes the terms of the Rigondeaux’s two-year agreement began in November of 2010, when Rigondeaux won the WBA’s interim belt by split-decision over Ricardo Cordoba.

“We feel as if [Rigondeaux’s] contract should be terminated this November, because he had an additional two years from when he obtained the championship, which he did in November of 2010,” said Spiegelman.

“That being said, we feel that it should expire in November. In fact, the judge, at the hearing, kind of corrected himself and said that there was a factor to be resolved as to when the two years actually ends. He commented that I was correct.”

Top Rank lawyer David Marroso, who is a senior attorney with the Los Angeles-based O’Melveny and Myers law firm, said he is awaiting what transpires with Rigondeaux’s most recent move.

“We understand Guillermo’s attorney filed an emergency motion with the court that contains new information the court was not aware of,” said Marroso. “We are waiting to see what the court does before making any decisions.”

Prior to facing Kennedy, Rigondeaux scored knockouts over a pair of previously unbeaten fighters in Willie Casey and Ramos, with the win over Casey being in March of last year.