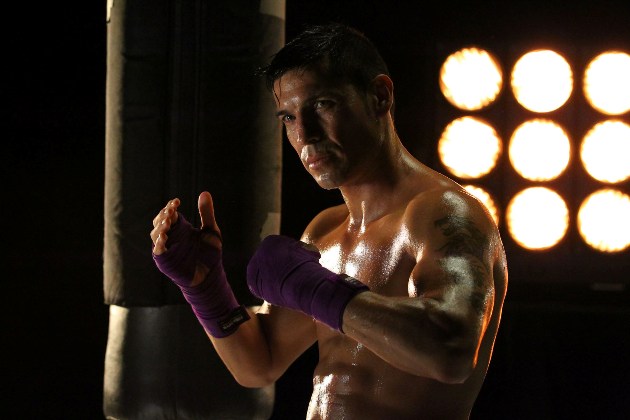 When he meets WBC middleweight beltholder Julio Cesar Chavez Jr. in their HBO Pay Per View-televised clash on Sept. 15 from The Thomas and Mack Center in Las Vegas, RING middleweight champion Sergio Martinez vows to brutalize his 26-year-old Mexican rival by using his straight-ahead style against him.

Meanwhile, Martinez, 37, is in pursuit of his sixth straight win, and his fifth consecutive knockout during that run, having left his past five opponents beaten badly.

Former undisputed middleweight champion Kelly Pavlik, former two-time welterweight titleholder Paul Williams and top contender Matthew Macklin were all left with badly bleeding faces after having lost to the Argentine, with Williams being stopped in the second round and Macklin, in the 11th,.

The following are Martinez’s training camp notes taken from a press release distributed by HBO in association of fight promoters Lou DiBella Entertainment, which has Martinez, and Top Rank, which handles Chavez.

In it, Martinez discusses his charitable ventures outside of boxing, which serve as a sharp contrast to what it takes to be the polished fighter whose razor-like fists have sliced up opponents.

Thursday, August 23: Martinez – You’re involved with multiple charities and causes, you participated in a TV dance competition back home in Argentina, and you generally represent the sport with class. Do you consider yourself an example that a boxer doesn’t have to take on a thuggish persona to be a world-class fighter?


“I believe that as a professional athlete in the public eye, it is my duty to be the voice to the individuals and groups that cannot be heard. This is very close to my heart, and that is why I devote my time to many causes to bring awareness to these issues.

“I would agree with that statement that you do not have to act with a negative demeanor or a thuggish attitude in order to be a world-class fighter. In the end the people that you are trying to impress with that attitude will not be there to help you once your career is over.

“What is important is dedicating yourself to your profession and acting like a professional, and with hard work and a good clean lifestyle, you can possibly be a world class fighter. In my whole life, I have never drank alcohol or smoked tobacco, always ate healthy, and always stayed active.

“The up and coming fighters that will be on the world stage have to be cognizant that once you are in the public eye and have a public forum, that it is a great opportunity to give a voice and recognition to those that are less fortunate and bring awareness to social issues that normally wouldn’t get the attention.

“My goal is bring awareness to end bullying in schools and end domestic violence against women. I believe with the platform I have, I could help out.”