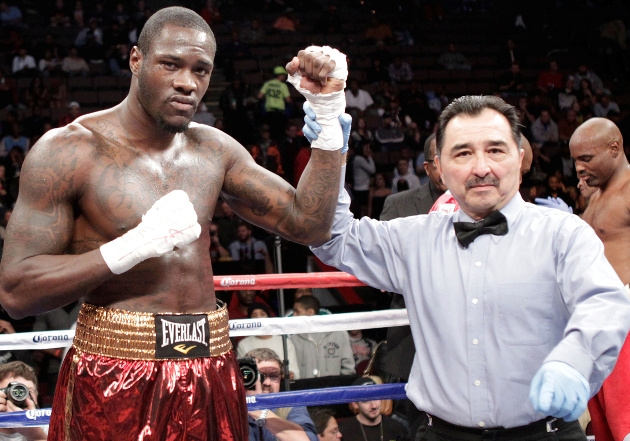 But even before Wilder’s sensational, first-round stoppage of Trinidad and Tobago’s Kertson “The Warrior” Manswell (22-7, 17 knockouts) on Aug. 4, Steward called for the handlers of the 26-year-old 2008 Olympic bronze medalist to put him in against stiffer competition.

“He’s got to get away from fights like that. Forget about the record,” said Steward of the 6-foot-7 Wilder, who dropped Manswell three times in 2 minutes and 20 seconds on the way to his 24th knockout in as many fights.

“He’s got to start fighting some real fighters, and when he does, you know what? He’ll beat them. So I think that the best heavyweight prospect for winning the heavyweight title is Deontay Wilder.”

“The plans are that it’s time to step him up. It’s time to take him to the big stage — the HBOs and the Showtimes,” said De La Hoya, President of Golden Boy Promotions. “It’s time to unleash Deontay Wilder, and he will be a serious, serious threat to the heavyweight division.”

After the Manswell win and June’s third-round knockout victory over former heavyweight title challenger Owen Beck, Wilder has said that he has benefited from having worked with Steward, Wladimir Klitchko and his older sibling, WBC titleholder Vitali Klitschko.

“I’m telling you this guy reminds me of a heavyweight Thomas Hearns,” said De La Hoya. “I mean, he cracks you with that right hand and it’s over.”

Such was the case with Manswell, who never recovered after being staggered by the first right hand that Wilder landed. Wilder dropped Manswell for the first time with consecutive lead rights, floored him once more with a left hook, and then finished him with jab-right-jab combination.

With the heavyweight division being dominated by the Ukrainian Klitschko brothers, Wilder is trying to become the first U.S.-born fighter to hold a heavyweight crown since 2007, when Shannon Briggs briefly wore the WBO’s belt.

In 2006, Hasim Rahman held the WBC strap while the IBF title was around the waist of Chris Byrd. Puerto Rican-American John Ruiz, the first Latino to win a heavyweight belt, held the WBA title from 2001 to 2005.

Vitali Klitschko is coming off a unanimous decision over Dereck Chisora in March that represented his 12th straight win and his ninth stoppage during that run. Vitali’s last loss was more than nine years ago by disputed sixth-round technical stoppage (on cuts) to Lennox Lewis in June of 2003. Vitali, who will next face Manuel Charr (21-0, 11 KOs) on Sept. 8, turned 41 on July 19.

Wladimir Klitschko, 36, recently earned his 16th consecutive win and his 12th stoppage victory during that time. Wladimir is coming off a sixth-round knockout of Tony “The Tiger” Thompson in a July 7 rematch of his 11th-round stoppage of Thompson in July of 2008. 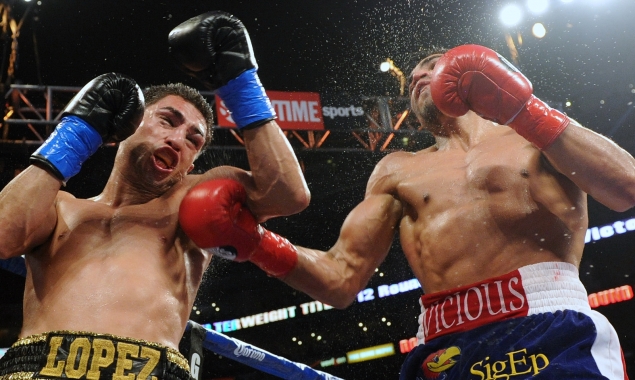 Lopez already is coming off the most significant win of his career, an upset, ninth-round TKO over former welterweight titleholder Victor Ortiz (29-4-2, 22 KOs) in June during which Lopez broke Ortiz’s right jaw.

But Lopez will be making his 154-pound debut against Alvarez, having fought at a career-high 144 and three-quarters pounds against Ortiz when he entered a clash weighing more than 140 pounds for only the eighth time as a professional.

Alvarez, meanwhile, will be making the fifth defense of his WBC belt against Lopez, and is coming off a unanimous decision win over ex-titleholder Sugar Shane Mosley, whom he vanquished in May to end Mosley’s winning streak of 21 consecutive bouts against fighters of Mexican decent.

During this interview with RingTV.com, however, Lopez relished his renewed role as underdog against Alvarez.

“But the punching power that somebody has has nothing to do with the size of the arms or the size of the upper body. It’s about putting the right punches together, and if you do that, you can hit as hard and seem as strong as any body builder out there. That, to me, wasn’t even an issue.”

Lopez contends that he will not be at a disadvantage in size against Alvarez.

“Going up to 154 to face Canelo, obviously, that’s going to be an issue in most people’s heads. But as long as I have faith in myself, I can get stronger. Remember, I don’t have to worry about my weight. And I’m a big, tall guy. I’m not to worried. I mean it’s good for people to question my ability to go up to 154. I mean, I understand it. But only I know,” said Lopez.

“I don’t blame anybody for questioning that. Their reasons for doing that are obvious. I’ve been fighting at 140 for most of my career. But the people in my camp and the people who know me, the members of my team, they know my potential. They know that the weight is the least of issues in my situation. The talent that Canelo has is a far bigger issue than his weight.” 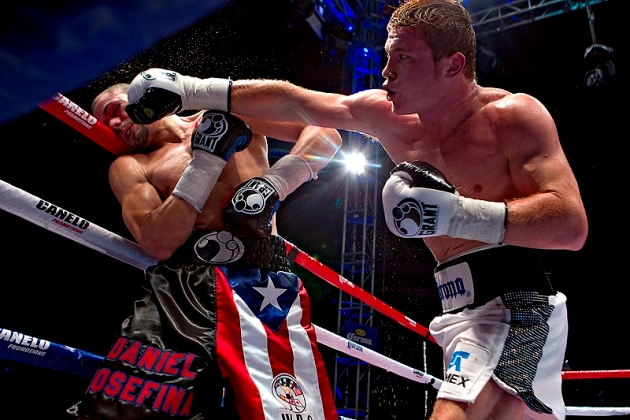 Pedraza’s amateur career is considered one of the greatest in Puerto Rican history, having gone 160–16. Pedraza, 23, won gold medals in the 2010 Central American and Caribbean Games in Mayag├╝ez, Puerto Rico, in the Copa Romana Tournament in Dominican Republic, and in the qualification tournaments held in Guatemala for the 2008 Beijing Olympics, and was a silver medalist during Italy’s world championship in 2010.

A 22-year-old whose career includes a win over ex-beltholder DeMarcus Corley, Dulorme is facing a difficult challenge in Hernandez, a 31-year-old winner of five consecutive fights, four of them by stoppage, including the last two straight.

“I’ve sparred for over 300 rounds with the best guys in the city. I helped Andrzej Fonfara get ready for Glen Johnson. I helped Carlos Molina get ready for James Kirkland,” said Ortuz, who is 31. “I just finished helping Donovan George get ready for his fight Friday. I figure it’s time to step up my competition a little bit and see where I’m at.”