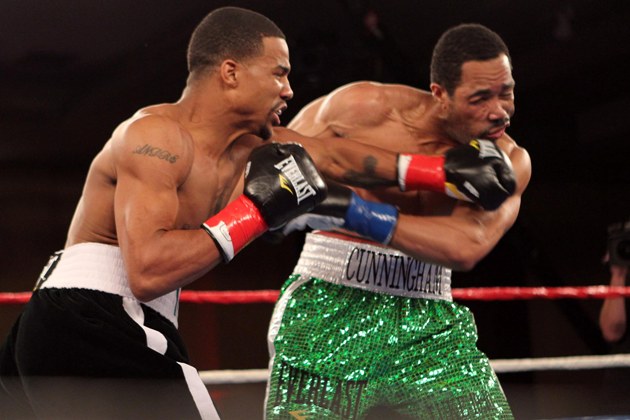 Super middleweight contender Andre Dirrell told RingTV.com that he anticipates a Nov. 17 debut under The Money Team (TMT Promotions), the newly-formed promotional firm of recording artist 50 Cent and fighter Floyd Mayweather Jr., against an opponent to be determined.

The rapper, whose real name is Curtis Jackson, has obtained a license in New York, has has received an application for one in Nevada, according to Nevada State Athletic Commission executive director Keith Kizer,

A former Olympic bronze medalist, Dirrell told RingTV.com that he initially met with Mayweather and Jackson in early May, the weekend that Mayweather unanimously decisioned Miguel Cotto for the WBC’s junior middleweight belt at the MGM Grand in Las Vegas.

“They’re trying to get me right up in there with those big name fighters, like a rematch with Carl Froch, and a rematch with Arthur Abraham, any time, any place. Abraham and Robert Stieglitz, they’re getting ready to fight for the WBO title [on Aug. 25,]” said Dirrell.

“I could fight any one of them. Hopefully, after that, I could get that fight. Froch or Abraham, they’re my two biggest targets right now, but my golden ticket is Andre Ward. I mean, after all is said and done, I can get two or three of these belts and then fight Ward.”

Dirrell has been trained by his uncle and grandfather, Leon Lawson Jr. and Leon Lawson Sr., respectively.

In a recent development, TMT Promotions has apparently attempted to sign Cotto, according to a report by BoxingScene.com.

Mexican-born featherweight Antonio Escalante, of El Paso, Texas, will pursue his fourth straight knockout in as many consecutive victories against Leonilo Miranda, of Mexico, on Saturday night at Illusions Theater at The Alamodome in San Antonio.

Escalante (27-4, 18 knockouts), who is 27, is coming off a fourth-round knockout of previously unbeaten Jose Francisco Camacho in April, and Miranda (32-4, 30 KOs), September’s eight-round unanimous decision loss to Gary Russel Jr.

Escalante-Miranda will take place on “S├│lo Boxeo Tecate” on the undercard of a main event featuring a rematch between middleweights Brian Vera (20-6, 12 KOs), of Austin, ex-titleholder Sergio “The Latin Snake” Mora (23-2-2, 7 KOs), of Los Angeles.

Since losing by split-decision to Vera in February of 2011, Mora rebounded with a seventh-round stopppage of Jose Flores in November. Vera is coming off April’s unanimous decision over Taronze Washington in April.

Junior welterweight prospect Danny O’Connor (17-1, 5 KOs), of Framingham, Ma., will headline the first professional boxing event to be held at The Gillette Stadium in Foxboro, Ma., against Eddie “The Puerto Rican Sensation” Soto (12-4, 4 KOs) on Sunday night in a show that is being promoted by Lou DiBella Entertainment.

A former two-time national amateur titlewinner and 2008 U.S. Olympic alternate, O’Connor, 27, will headline a three-fight card that will follow a 7 p.m. game between The Revolution and Montreal Impact.

O’Connor is managed by Kenny Casey, founder and lead singer for the band Dropkick Murphys, who orchestrated O’Connor’s fourth-round knockout of Daniel Sostre in May at The House of Blues in Boston.

The two fights will also be televised live on Telefutura’s Solo Boxeo Tecate.

Prescott rebounded from a 10th-round stoppage loss to unbeaten Mike Alvarado in November with a third-round knockout of Joel Cassiani in January. Prescott is best known for a 54-second knockout over former IBF and WBA junior welterweight beltholder Amir Khan in September of 2008.