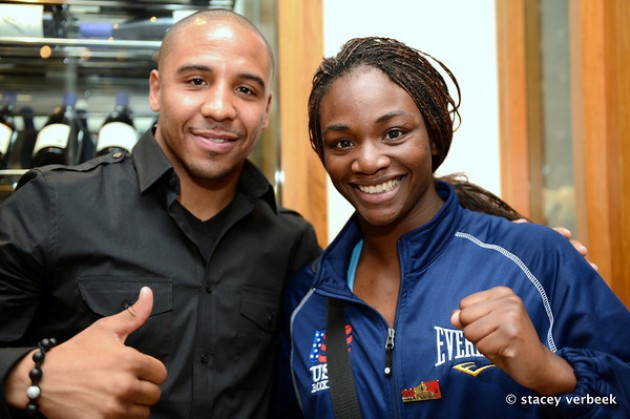 It was back in June in Las Vegas that RING super middleweight champion Andre Ward, an Olympic gold medalist in 2004, greeted 17-year-old Claressa Shields, wishing her well in her effort to achieve what he already had as an amateur fighter.

Their meeting took place at a press luncheon at the MGM Grand, where Ward (25-0, 13 knockouts) was promoting the Sept. 8 defense of his RING, WBA and WBC 168-pound belts against RING light heavyweight champion Chad Dawson (31-1, 17 KOs).

On Thursday in London, Ward’s wish came true, as did the Olympic dream of Shields 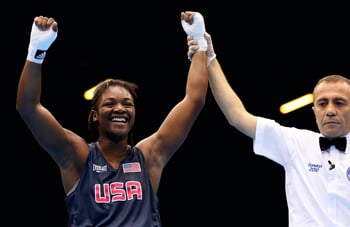 The usually aggressive teenager came out disciplined in the opening round, feeling out her Russian opponent nearly double her age, and the bout was tied, 3-3, after two minutes of boxing. That was as close as Torlopova would get in the four-round bout.

Shields began utilizing her strong edge in hand speed to impose her will in the second and claimed a 10-7 advantage at the halfway mark. She continued to catch the Russian with strong shots and combinations in the third round on her way to a 15-10 lead with one round remaining. Shields extended her advantage to seven in the final two minutes en route to a 19-12 final decision and the middleweight gold medal.

“This is something that I’ve wanted for a long time and when I felt that boxing wasn’t going right and my life wasn’t going right, I always wanted a gold medal,” Shields said in a press release from USA Boxing. “I just kept working toward it and people were saying that I couldn’t do it, that I was too young, that I’ll never do it. There were going to be girls that would beat me, that had more experience and I proved them all wrong.”

The Flint native dedicated her medal to her hometown and joins Flint boxers Andre Dirrell and Chris Byrd in winning Olympic hardware. Between the three of them, they own every color of medal with Shields completing the trifecta with her gold.

Shields, who is only 17 years old, also accomplished history as the second-youngest fighter to win a gold medal during the inaugural year for women’s Olympic boxing.

Since then, however, Ward has been guided by his trainer and father figure, Virgil Hunter, under whom he dethroned Mikkel Kessler for his first professional world title — the WBA’s version — by decision in November of 2009.

“I think their relationship materialized right there in Las Vegas. I do know that they have spoken often, and Andre has wished her well and that he was pulling for her,” said Hunter.

“So now, she won the gold, and that’s great. But she’s a tough, tough, tough girl. I was watching her on Youtube the other day, and she can really put the punches together.”