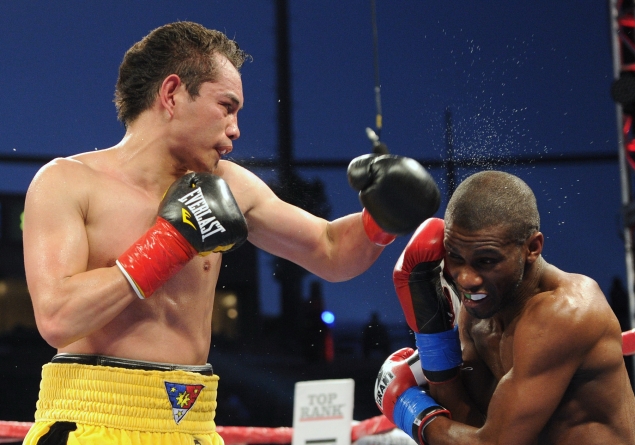 HBO and Top Rank Inc. have officially announced that junior featherweight titleholder Nonito Donaire will face Japan’s Toshiaki Nishioka on the network from the Home Depot Center in Carson, Calif., on Oct. 13, with former lightweight beltholder Brandon Rios making his junior welterweight debut against Mike Alvarado on the undercard.

As reported yesterday, the winner of the Donaire-Nishioka fight will become THE RING’s champion of the 122-pound division.

Top Rank Inc. CEO Bob Arum initially informed RingTV.com of the card, whose participants have a combined record of 131-5-4 with 86 knockouts and boast a winning percentage of 94 percent.

“History shows there is only one way for a fighter to make the leap to stardom,” said Top Rank President Todd duBoef, whose company is working with Teiken Promotions on the card.

“And that’s by accepting the challenges and risks like the ones Donaire, Nishioka, Rios and Alvarado committed to on October 13. They are young, hungry and ambitious.”

With a decision over Eric Morel in April, Mares won the WBC belt that had been vacated by Nishioka, who stretched his winning streak to 16 straight fights with his unanimous decision over two-division titleholder Rafael Marquez in October.

Donaire has knockouts over three-division titlewinner Fernando Montiel and ex-beltholders Volodymyr Sydorenko and Vic Darchinyan in the second, fourth and fifth rounds, respectively, as well as a split-decision over Wifredo Vazquez Jr. and a decision over previously unbeaten WBO junior bantamweight titleholder Omar Narvaez.

Rios (30-0-1, 22 KOs) and Alvarado (33-0, 23 KOs) were on the same cards for their last bouts. Rios is coming off a controversial split-decision over Richard Abril in April that followed his 11th-round knockout of John Murray in December.

On the Rios-Abril undercard, Alvarado vanquished Mauricio Herrera (18-2, 7 KOs) over the course of 10 bloody rounds to follow up his come-from-behind, 10th-round knockout of Breidis Prescott on the November undercard of a main event featuring a disputed majority decision by then-WBO welterweight titleholder Manny Pacquiao over Juan Manuel Marquez.

“Fight fans everywhere will be marking their calendars for October 13 to see this superb, all-action doubleheader on our late-night franchise,” said Kery Davis, senior vice president of programming, HBO Sports.