THE RING September issue: At a glance 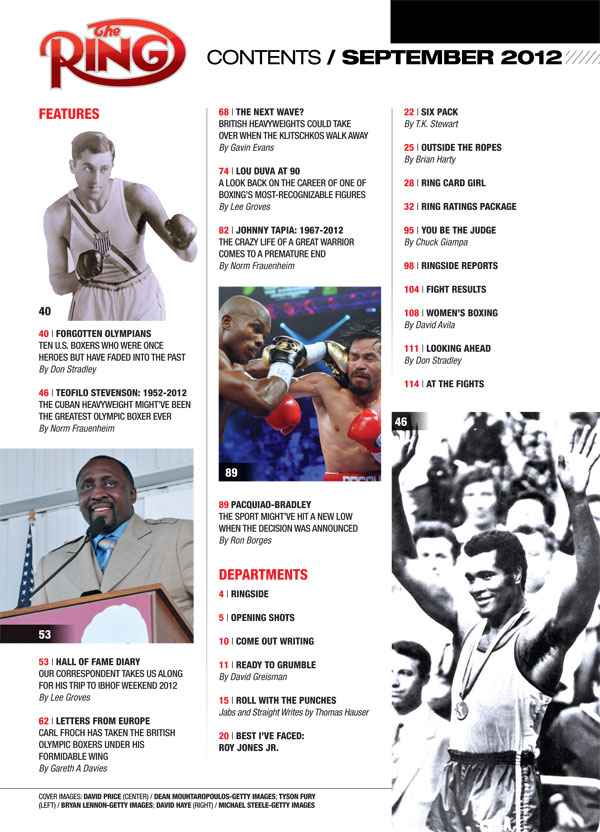 The Klitschko brothers have made the heavyweight division their personal domain but their collective reign has to end at some point. When it does, it might be a group of big blokes from Great Britain who will take over.

UK correspondent Gavin Evans writes in Heirs Apparent — the cover story of the September 2012 issue of THE RING — that Lennox Lewis changed the perception of Britain’s “horizontal heavyweights” when he became the best in the division in the 1990s. However, when he left the scene, the landscape was left barren.

Big British men like David Haye, David Price and Tyson Fury, who are on the cover of the magazine, have generated considerable excitement in the UK and beyond. Evans gives you an idea of how this transpired and where the UK heavyweights go from here. 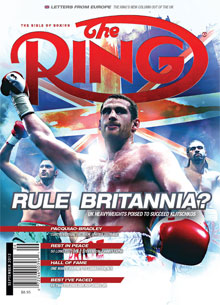 Also in this month’s issue, in The Great Las Vegas Belt Heist, contributor Ron Borges explores the controversial Manny Pacquiao-Timothy Bradley fight and the subsequent fallout. Bradley won a split decision, which was met with a crescendo of criticism from the majority of boxing writers and fans.

In the spirit of the Olympics, contributor Don Stradley brings to your attention in Forgotten Olympians 10 one-time Olympic heroes whose names have more or less faded into history.

THE RING also says goodbye to Cuban Olympic legend Teofilo Stevenson, whose story – The Greatest Olympian? – is told by contributor Norm Frauenheim. In Mi Vida Loca, we also look back on the life of the late Johnny Tapia.

Contributor Ron Borges, in A Life in Boxing: Lou Duva at 90, celebrates the remarkable career of one of the most recognized and popular figures in the sport to mark his 90th birthday.

In One Man’s Pilgrimage, Contributor Lee Groves gives you a first-person account of his memorable trip to the 2012 International Boxing Hall of Fame weekend in Canastota, N.Y., in which Thomas Hearns was inducted.

In this month’s Looking Ahead, titled Neverending Trial, Stradley writes that Christy Martin will always look over shoulder even though her husband – convicted of attempting to murder her – is behind bars.

And in our monthly column from the UK, Gareth A Davies writes that super middleweight star Carl Froch took the British Olympic boxing team under his formidable wing.