Rodriguez is inspired by ‘the fighter’ in his twins 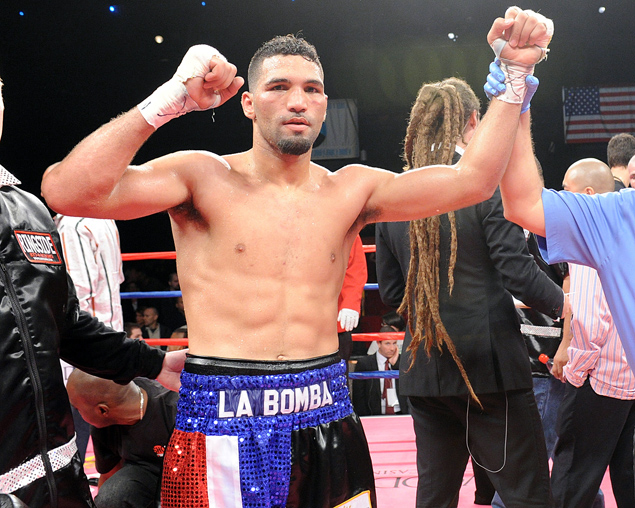 Ever wonder why Edwin Rodriguez fights the way he does? Why the rising super middleweight contender is willing to fight prospect after prospect? Why he looks like he’s fighting for his life every time he steps into the ring?

It’s because he’s fighting for two lives, his twin children Serena and Edwin Jr., who were born premature after just 23 weeks and both suffer from degrees of cerebral palsy.

“Just being able to see my kids fight to stay alive and how they fight every day, that’s what keeps motivating me,” said Rodriguez (21-0, 14 knockouts), who fights unbeaten puncher Jason Escalera on Sept. 29 at Foxwoods Resort in Mashantucket, Conn.

Serena and Edwin Jr. were born six years ago on the day their father will headline the HBO Boxing After Dark broadcast against Escalera (13-0-1, 12 KOs).

Rodriguez, the 2005 U.S. amateur champ and 2006 national Golden Gloves champ, had yet to turn pro when he and his pregnant wife, Stephanie, learned during a routine checkup that she was dilated and about to give birth premature.

“I had regular pre-natal care with five weeks in and everything was completely normal,” said Stephanie Rodriguez, who has a graduate degree in counseling and works at a local elementary school.

“Everything was normal the entire pregnancy, and during that regular appointment, a test noticed I was showing signs of premature labor, which I wasn’t aware of. I had no physical issues whatsoever. It should have been fine. This is an epidemic, and something I found out afterwards.”

The doctors explained the severity of the situation. They spelled out all the grim possibilities of giving birth this prematurely. Edwin and Stephanie never said a word to each other. Instead, they darted one another a look, a quick glance that intimated they were going to do this.

The moment the couple learned about the dire circumstances of their twins is etched in Rodriguez’s mind.

“We didn’t think it was as bad as it really was,” he recalled. “The doctors explained to us that Stephanie would be on bed rest and continue checking her. The intensive care unit (ICU) people came down and told us she was able to go after 23 weeks and three days. You can say we started to get these hints that this might not play out that good. They started to tell us, being young parents, we still had our lives ahead of us. They said it might be an idea to let them rest in our arms and let them go.”

Edwin didn’t want to believe what he was hearing. He went through the gamut of emotions, although nothing seemed to register. It all seemed so surreal. What pulled him back was when a klatch of doctors who came down to discuss to Edwin and Stephanie other possibilities.

Termination was a suggestion.

Not to Edwin and Stephanie. Right then they wanted to have their children fight for their lives. No talk was needed. Just a look said it all.

Serena was born first, two minutes older than her brother, Edwin Jr. They were one pound and three ounces. They were green and tiny, small enough to fit in the palm of Rodriguez’s hand, though he wasn’t able to touch them.

Rodriguez, who was in the delivery room when they were born, remembers “So many things going on in my head. I saw the doctors freaking and the doctors were rushing around. We didn’t even get a moment to hold them. The doctors wanted to get them on oxygen right away.

Everything was not okay.

Within the first few days of her birth, Serena had to undergo surgery to repair a hole in her heart. The children also had to undergo additional surgery to correct their retinas. And Edwin Jr., who still needed a machine to breathe, was struggling.

One doctor suggested that Edwin be a ‘DNR,’ meaning Do Not Resuscitate if his heart stopped again. They were told he had a zero chance of survival.

“We weren’t sure what to do, whether we were being selfish and putting Edwin through hell or not, but he kept fighting, he kept coming back,” Edwin said. “His heart stopped a few times. Each day that passed, we started to feel better. They were gaining weight and getting bigger, but it got a little scary there.”

Stephanie recalls the ordeal of those touch-and-go early weeks of their twins’ lives.

“They both coded many, many times and they had to be resuscitated, they both underwent spinal taps and were both re-hospitalized a number of times,” she said. “We were strongly encouraged to take Edwin Jr. off life support and we did think about his quality of life.

“But we both were at the point where we felt comfortable where Edwin was really optimistic all of the time. We got through it. They’re both miracles.”

Those days were tougher than anything Rodriguez had experienced – or would experience – in the ring.

“I don’t really like to talk about it. It brings back emotions that I don’t want to live through again, and I don’t want to feel sorry for my kids. No parent wants to see their child die. But I was helpless, and it’s the worst feeling in the world, to see your kids struggle every day to breathe, and you can’t do anything to change it. It’s the worse feeling in the world. I kept saying this was going to be okay, this was going to be okay. I started to believe it.”

Rodriguez had to wait two weeks before he could touch his children. He was dressed in hospital scrubs when nurses gently placed them on his chest.

The twins were in NICU for 120 days. When they came home they weighed four pounds and were put on oxygen and a heart rate monitor. Because their immunity systems were fragile, the home was quarantined the first four months. The twins had home nursing care, although Edwin had to get up at least 20 times a night to fix the oxygen tubes attached to their noses. The twins would reach two before they were able to breathe on their own.

There was no time for Rodriguez to think about capping his excellent amateur career during these early months with the children at home. Prior to their premature birth, Rodriguez had a realistic shot at making the 2008 U.S. Olympic squad.

He still had his dream of being a professional boxer and fortunately his amateur reputation was enough to garner the attention of promoter Lou DiBella and manager Larry Army.

“First of all, he was a terrific amateur with an explosive, tremendous offense, and I also knew his story, with the two little babies that weren’t supposed to live,” DiBella said. “Larry Army kept him active and caring for two desperately ill children, that showed me Edwin’s character, and impressed me as much as his ability. I always believed he was among the best amateurs in the country.

“You have obstacles in life, and I liked the way he handled his obstacles. He believed boxing would be the way out for his family and it made me want to sign him and Larry Army wanted me to sign him. He’s a tremendous talent and he’s an offensive machine whose defense is getting better. His quality in the ring gets better and better, and he’s established himself to fight HBO-level fights. He can beat just about anybody. He’s 27 and we want to increase the level of his opposition with a career-defining fight. I really believe he’s a fight or two away from the top of the division.”

And when Rodriguez gets to the top he has no doubt about his ability to persevere through adversity.

“This whole experience has helped me big time as a fighter and as a person,” he said. “Against Kevin Engel, I was beating him. In the third round, I got a little overconfident and I came out looking for the kill. I got careless. I got caught with a left hook and I got buzzed. I held on tight and pretended I wasn’t hurt. But I was dizzy.

“I started to think about my kids and what’s going to happen if I lose. The first thing that came to my mind was what I’m fighting for, what I’m always fighting for.”

It is a fight that will continue long after he hangs up the gloves.

Whereas Serena has caught up to children her age, Edwin Jr. will need attention as he gets older.

Edwin Jr. is starting to speak and they’ll watch their father fight on TV. Serena likes it when her father delivers knockouts so he can bring her back to Disney World.

It will be emotional day Sept. 29 when Rodriguez climbs through the ropes to face Escalera. It marks the twin’s sixth birthday, two children who against all odds found a way to live and serve as a constant source of courage and strength for the man who fights for them.