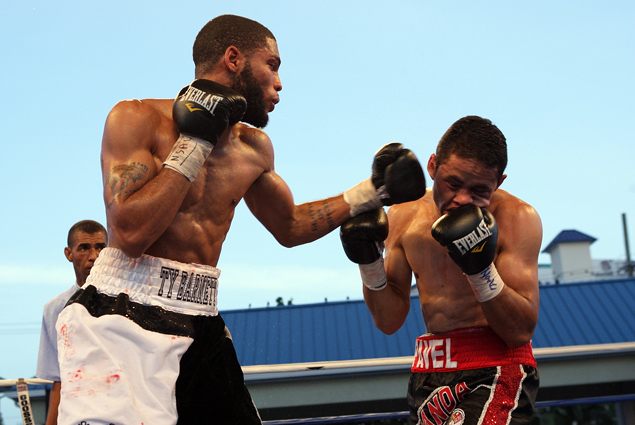 One doesn’t have to search very far to find an article or video suggesting that Filipino-American lightweight Mercito Gesta could be the next Manny Pacquiao.

The comparisons are easy. Same nationality, same promoter, and now a headlining spot on this week’sFriday Night Fights at the Texas Station Casino in Las Vegas, Nev., to show if maybe he has world class skill too.

His opponent, Ty Barnett, knows all about not taking big-name association and rising star status for granted.

“I know he’s overrated. Look at his resume. His opponents have been hand-picked, they’ve been easy fights for him. He hasn’t really been challenged at all,” Barnett told RingTV.com.

There was a time when Barnett (20-2-1, 13 knockouts) was expected to be “the next one” as well.  The 29 year old was a part of Barry Hunter’s stable in his hometown of Washington, DC., which includes Lamont Peterson and brother Anthony Peterson. Barnett spent time soaking up the wisdom of some of the city’s past world champions, like Mark “Too Sharp” Johnson and Keith Holmes.

After racking up 16 wins though, he was stopped in the first round by unheralded Juan Santiago in what was expected to be nothing more than a rust remover after an 11-month layoff.

“Females, and you know, there’s life outside of boxing – the party scene and all those things. I was doing things that I wasn’t supposed to be doing because I was beating my competition so easily and running through these guys while I was still doing these things. It finally caught up with me,” said Barnett.

Two years later, he took another knockout loss, this time to Andrey Klimov. It became clear to him that he wasn’t as dedicated to the sport as he should be. As a 5-foot-10 lightweight, he could have significant advantages over virtually anyone in the division if he could make use of his gifts.

It also became clear that a change of scenery was going to be necessary if he wanted to truly hit the restart button.

“Me climbing that ladder, at one point I was 16-0, undefeated prospect, but still nobody knew much about me because I was still in Anthony and Lamont’s shadow,” said Barnett. “Things weren’t going right with my career. I felt as though I was being overlooked. I felt as though Barry wasn’t really going to bat for me. It was more about Anthony and Lamont than about me. So I just had to separate myself from that situation.”

Barnett committed himself to a pair of new trainers, Andrew Council and Duke Buchanan, but also to a new diet, going exclusively vegetarian. In the past, he had simply avoided red meat, but since the beginning of 2012, he has cut out meat entirely.

It’s a lifestyle that welterweight titlist Timothy Bradley has famously endorsed (though Bradley is a full-fledged vegan during training camp), and Barnett feels that it’s rejuvenated him physically as an athlete.

“I’ve noticed a big difference. I’ve got more energy when I’m training, I just feel better. By eliminating certain things, feeding my body the right things and living right, I’m able to do what I want to do in the ring,” said Barnett.

If he wants to do what he wants to do in front of a national ESPN2 audience on Friday night, he’ll have to show he can deal with a southpaw in Gesta. Diminutive left-handers have been Kryptonite for tall orthodox fighters in the past. To prepare himself, Barnett has enlisted the services of a hard-hitting lefty, fellow D.C. fighter and former titlist DeMarcus “Chop Chop” Corley.

In doing so, he has in some ways found the guidance he has been hoping for.

Corley, used to being an afterthought underdog after years of fighting on the road and on short notice, has taken on a mentor role for this particular bout, going above and beyond the sparring partner’s expectation of just giving good work in the gym.

“He gives me advice all the time. He goes home and studies my opponent, so he can mimic them during sparring,” said Barnett, who has also sparred world-class southpaws Zab Judah and Sharmba Mitchell in the past. “I’ve learned a lot. Fighting a southpaw is really not difficult. It’s a lot easier if you know how to handle them.”

Gesta (25-0-1, 13 KOs), who is expected to be a heavy betting favorite by bell time, has had plenty of television appearances throughout his career, so there is no short of footage for Barnett to learn from.

There is some of Barnett tooÔÇöyou can see him spar, and get stopped by Santiago and Klimov if you scour the internetÔÇöbut he’s hoping that can perhaps lull his opponent into the same false sense of confidence he thinks Gesta’s backers have in him.

“He doesn’t know. And a lot of the stuff he does see, the stuff on YouTube and whatnot, that stuff’s pretty old,” he said. “It’s a new Ty Barnett.”