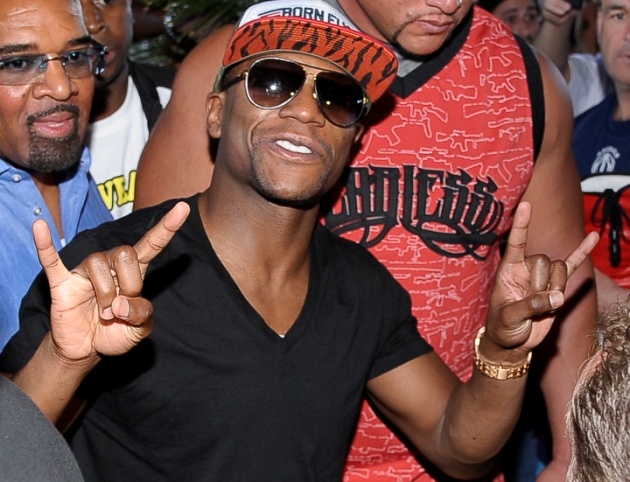 TMT (“The Money Team”) Promotions, recently formed by the union of Floyd Mayweather Jr. and his friend, millionaire rapper 50 Cent (aka, Curtis Jackson), could boost the sport of boxing in the African American community and make it easier to negotiate a bout between Mayweather and Manny Pacquiao, according to Top Rank CEO Bob Arum, who handles Pacquiao.

Arum said that he believes Jackson could elevate the status of African American fighters in much the same way that Top Rank has for Latino boxers such as Juan Manuel Marquez, Miguel Cotto, Antonio Margarito and Julio Cesar Chavez Jr.

“I wish [50 Cent] and his company a lot of luck, because he has, in his business career, been able to energize the African American community and to reach out to them. If he does that as he expects to do in boxing, then that will help everybody in boxing,” said Arum.

“It would be just in the same way that we have helped everybody in boxing when we energized the Hispanic American community and got them involved in the sport to where (they are the) biggest fans now. I really and truly wish them the best of luck, and I’m rooting for them.”

During an exclusive interview with RingTV.com, 50 Cent said that he would begin running TMT Promotions along with Mayweather when the fighter is released from his 87-day sentence at the Clark County Detention Center on Aug. 3.

Although Mayweather’s past six fights have been promoted by Golden Boy Promotions, it is unclear whether or not that relationship would continue under TMT, even as Golden Boy CEO Richard Schaefer has expressed optimism about working with 50 Cent.

Golden Boy never has signed Mayweather to a promotional contract. But since the fighter’s company, Mayweather Promotions, does not have a promoter’s license, Mayweather paid Golden Boy a flat fee to promote Mayweather’s bouts.

Schaefer and Golden Boy Promotions President Oscar De La Hoya are in London at the Olympics and could not immediately be reached for comment.

But Top Rank and Golden Boy have failed in their past three attempts to negotiate bouts between Mayweather and Pacquiao.

“I would think that if (50 Cent) promoted Floyd, then it would make a matchup between Pacquiao and Mayweather that much easier,” said Arum. “You would have somebody that is a friend and a mentor that he can rely on and they would protect his interests in any kind of promotion, and I would be on the side of Pacquiao.”

Former titleholder, Zab Judah, informed ESPN.com that he met with 50 Cent, and ex-beltholder Andre Berto also has reportedly met with him as well.

Jackson has obtained a license in New York and has received an application for one in Nevada, according to Nevada State Athletic Commission executive director Keith Kizer.

AL HAYMON RANKS NO. 1 AMONG YAHOO’S 25 MOST POWERFUL FOLKS IN BOXING

Boxing adviser Al Haymon ranks No. 1 in a recent story by Yahoo!Sports among boxing’s most powerful people ahead of Top Rank President Todd duBoef, Schaefer, 50 Cent and Arum, to round out the top five. 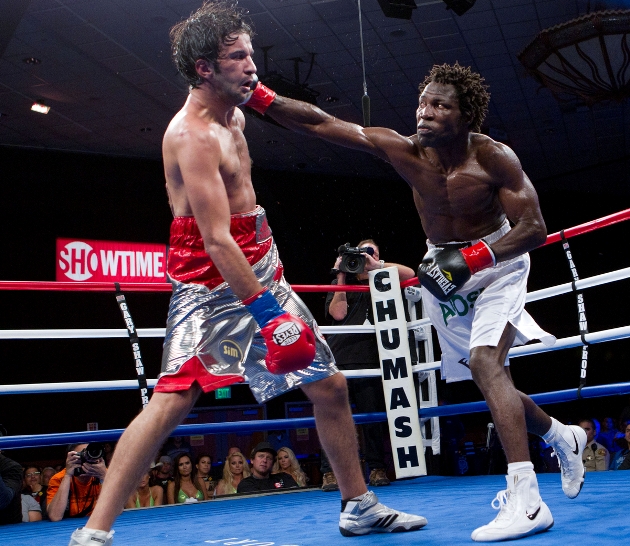 While Olivier is after his third straight stoppage win and coming off a fifth-round knockout of Mark Lloyd in May, Cheba was last in the ring for a unanimous decision loss to Nigerian southpaw Ajose Olusegun in September in a WBC eliminator.

Bute is coming off a fifth-round stoppage loss in May to three-time titlewinner Carl Froch, (29-2-1, 21 KOs), of England, before Froch’s hometown fans at Capital FM Arena in Nottingham, England.

The California State Athletic Commission is looking to replace executive director George Dodd, who resigned from his post efffective on Tuesday, July 31.

The commission will hold a hearing on Aug. 8 to choose a new acting director, according to Russ Heimerich, with the CSAC’s public relations office.

“They will be discussing the appointment of an acting or interim officer, and then, at some point after that, they will begin a search for an executive officer. That will probably be a nationwide search. No one has replaced him yet. That will be a matter for the commission to do a search and then to hire somebody,” said Heimerich.

“For right now, the manager who is over there, her name is Kathi Burns. She’s in charge over there until they find a new executive officer. The timetable is really up to the commission, and I would imagine that they will be discussing a timetable at their next meeting, which is next week.”

Dodd said that he notified the CSAC’s board of his intentions, a decision that comes two weeks after having been censured for mishandling the finances of the agency which regulates mixed martial arts and boxing in California.

Dodd told RingTV.com in a previous interview that his last event would be the Robert Guerrero vs. Selcuk Aydin fight in San Jose, Calif.

“It’s been an honor to serve the athletic commission and the people of the state of California. During my two and a half years as the executive officer, we’ve never had a fighter spend an entire night in the hospital with a serious injury,” said Dodd.

“So I’m proud of that record. I’m sure that the training that was provided for over the two and a half years from well-qualified officials is what contributed to that.”