Garcia speaks up for himself at final presser for Khan showdown 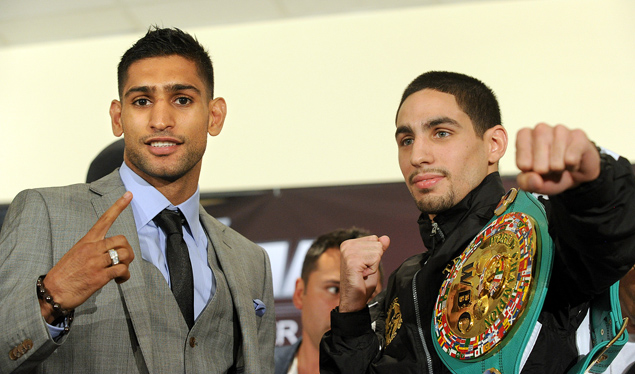 LAS VEGAS – Danny Garcia has been content to let his father and trainer Angel Garcia to do the pre-fight trash talking to his opponents throughout his pro career.

The undefeated 140-pound beltholder continued to allow his father to handle the “smack talk” during the build up to his junior welterweight title unification bout against Amir Khan – a task his bombastic father ran wild with during media events and interviews – but Garcia spoke up for himself at the final press conference on Thursday at the Mandalay Bay, the site for Saturday’s HBO-televised showdown. 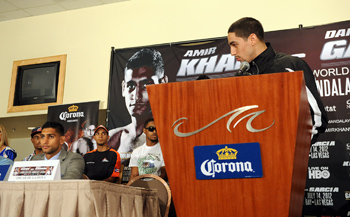 So far, they have been a successful duo. Angel Garcia guided his son to two U.S. national amateur titles before turning him pro in late 2007. Three and a half years after his pro debut, Garcia took on his first former titleholder, Nate Campbell, who he outpointed over 10 rounds last April.

Garcia followed the Campbell victory with decisions over former 140-pound beltholder Kendall Holt last October and WBC titleholder Erik Morales in March. Angel Garcia talked a lot trash and caused his share of ruckus at the press conferences and weigh-ins for those two bouts, but the 49-year-old trainer took his antics to another level for the Khan fight. Some would say he took it straight into the gutter by disrespecting the British star’s Pakistani heritage and perhaps taking a stab at Khan’s Islamic beliefs.

“I ain’t never met a Pakistani who can fight,” the elder Garcia told RingTV videographer Bill Emes during an exclusive interview at his North Philadelphia gym.

“Khan’s an overrated European fighter. He got knocked out in Europe, that’s the truth. He blamed it on his God and came to America to hide behind (trainer) Freddie Roach. This fight is going to come down to who’s stronger mentally, physically and spiritually; and I know Khan’s God already – his God is a punishing God – my God is a loving God.”

Khan (26-2, 18 KOs) is not at all amused by Garcia’s vulgar brand of irreverence, and the 26-year-old WBA titleholder vented a little bit during his turn behind the podium on Thursday.

“I promise you – and I never make these kinds of guarantees – but I will knockout Danny Garcia,” Khan said as the members of his huge entourage cheered loudly. “And I can’t wait until after the fight to see what you (Angel Garcia) will have to say.

“He says he’s never seen a Pakistani who can fight but he’s going to see one on Saturday night.”

Khan’s heated words led into an intense staredown immediately following the presser, during which time Garcia demanded that the 5-to-1 favorite look directly into his eyes. 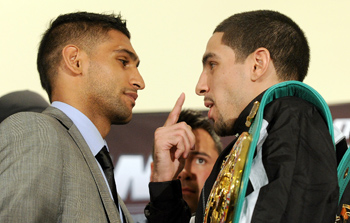 “I told him to be a man and look into my eyes,” Garcia told RingTV.com. “He was looking at my nose. I know that trick. Some guys look into your eyes and it throws their clicker (heart) off. They try to get around that by looking at a dude’s nose.

Garcia believes Khan’s knockout prediction is proof that his father’s words have gotten under the Brit’s skin.

“He’s not being real,” Garcia said. “We all know his game is boxing and moving and staying on the outside. If he comes to me and tries to fight me, we know what will happen; he’s the one getting knocked out. He’s the one with the suspect chin.”

“He’s going to find out the difference between being a titleholder and an elite fighter,” he said. “I’m an elite fighter. No disrespect to Erik Morales but he had his day. He was done when he fought Garcia.

“Garcia fought someone who was way past his best.”

Garcia says a faded “El Terrible” is still a tougher fighter than Khan.

“Can Khan take the punches that Morales took from me?”

Many boxing insiders believe that Garcia, who turned 24 four days before the Morales bout, isn’t ready to face a fighter of Khan’s talent and experience.

Apart from predicting that “every boxing writer who picked Khan to win will choke on his own foot on Saturday,” Angel Garcia believes that young standouts – especially titleholders – should fight each other. And Khan, despite his many accomplishments, is only 25.

“That’s the way it used to be in boxing,” he said. “The biggest fights used to be between young men. Sugar Ray Leonard vs. Tommy Hearns, Felix Trinidad vs. Fernando Vargas, Oscar De La Hoya vs. Shane Mosley – all of these fighters were in their 20s.

“They were young and they were champions, so they fought each other. That’s why boxing was more popular then.”