Chavez Sr. gets cake, gets colorful on 50th birthday 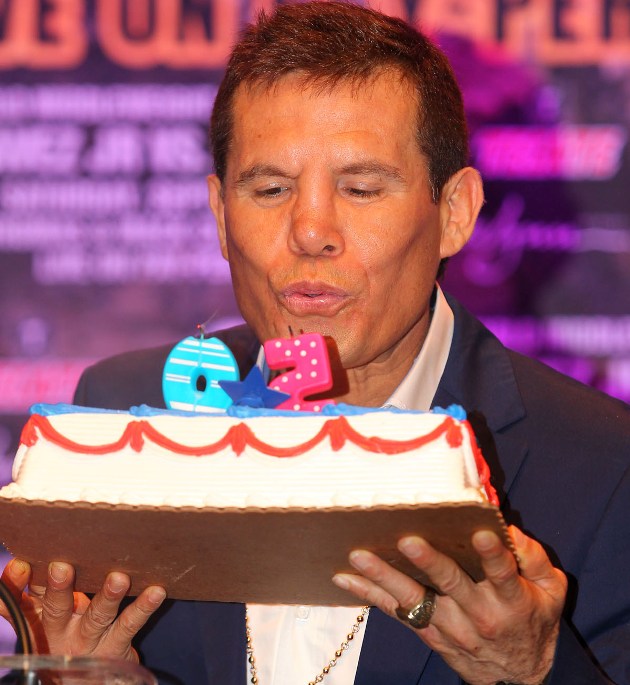 Julio Cesar Chavez Sr. celebrated his 50th birthday in style — albeit, one all his own — at the Edison Ballroom in midtown Manhattan on Thursday.

The former three-division champion was on-hand for the third stop in as many days for a press tour promoting the Sept. 15, HBO-televised clash that features his 26-year-old son, WBC middleweight titleholder Julio Cesar Chavez Jr., defending against RING champion Sergio Martinez.

After being presented with a birthday cake and posing for a photo flanked by Chavez Jr. and Martinez, Chavez Sr. focused his thoughts on his son’s opponent.

“I know that Julio is in a difficult fight, a tough fight. We know that Martinez is considered one of the best fighters now. But personally, I don’t like his style,” said Chavez Sr., who was 89-0-1 before losing his first bout, and compiled an overall career mark of 107-6-2, with 86 knockouts.

“He’s a runner. He stinks. He puts his hands down by his side. Personally, he’s been talking a lot of bulls–t. On Sept. 15th, all that bulls–t he’s been talking, he’s going to have to eat it.” 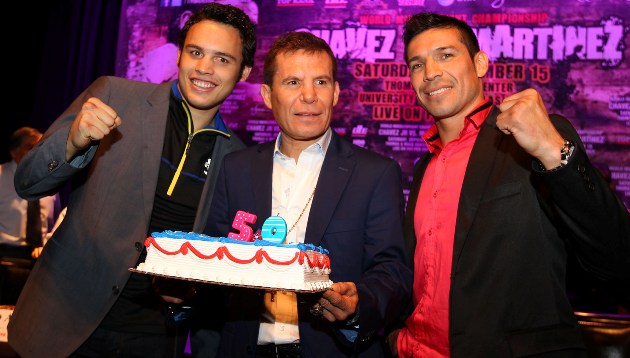 MARTINEZ VOWS TO GIVE A BEATING TO ‘CHICKEN’ CHAVEZ JR.

A 37-year-old southpaw, Martinez (49-2-2, 28 knockouts) has inflicted significant physical damage on his rivals.

Chavez Jr., said Martinez, will receive more of the same.

“We’ve been chasing him for a year, and he’s been running like a chicken. Finally, he said, ‘yes,'” said Martinez.

“You guys should take plenty of pictures of him now and before the fight, because after I beat him, he’s not going to look the same.” 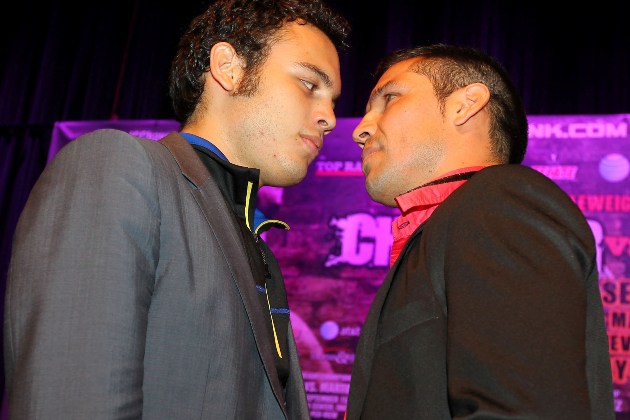 Chavez Jr. (46-0-1, 32 KOs) initially expressed gratitude to Martinez for giving him a shot.

“I’m very excited and happy for this opportunity. It’s going to be a great fight. I’d like to thank Martinez for giving me this opportunity,” said Chavez Jr. “This is the fight that I’ve wanted for a long time. I want to prove to Martinez and the world that I’m the best middleweight in the world.”

Then, however, Chavez Jr. took a shot at Martinez’s stint on Dancing With The Stars in his native Argentina.

“Martinez has been doing a lot of dancing. That’s the only way that he can beat me is dancing. I think he’s found his real profession as a ballerina,” said Chavez Jr.

“That’s good enough for me. I have always been a good person. I wish him the best and I’m happy that he has found his real profession as a ballerina, because after Sept. 15th, he is going to have to find something else to do.”

“Chavez is very strong, physically, and he inherited his father’s chin,” said DiBella, who also promotes Lee. “He’s a huge middleweight. Much bigger than Martinez. I was impressed, because he was losing, but you saw the strength differential, and that was the difference in the fight.” 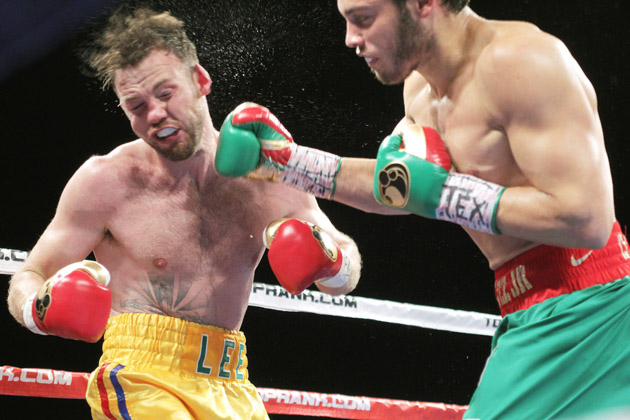 Lee had won his past 13 fights, eight of them by knockout, since himself being stopped by Bryan Vera in the seventh round in March of 2008. Lee had avenged his loss to Vera following a 10-round unanimous decision in October, and was coming off a second-round stoppage of Saul Duran in March.

“My punches had no effect on him. I couldn’t hold him off. He was too big, too strong,” said Lee. “A lot of punches I threw in there could have hurt a lot of people but he just walked through them.”

During that time, Chavez has vanquished previously unbeaten Sebastian Zbik for his current title, scored a fifth-round knockout over Peter Manfredo Jr., and dominated hard-hitting Marco Antonio Rubio for a unanimous decision.

On the same night and in the same town that Top Rank and DiBella entertainment have scheduled Martinez-Chavez Jr. on HBO Pay Per View, Golden Boy Promotions has scheduled a Showtime-televised bout between Mexican WBC junior middleweight titleholder Saul “Canelo” Alvarez (40-0-1, 29 KOs) and Josesito Lopez (30-4, 18 KOs).

Lopez is coming off an upset ninth-round stoppage of former welterweight titleholder Victor Ortiz (29-4-2, 22 KOs), who had been named to face Alvarez if he got beyond Lopez. Alvarez-Lopez is slated for the MGM Grand in Las Vegas.

During an interview with RingTV.com, Alvarez said he is ready to match up opposite Mexican rival Chavez Jr. 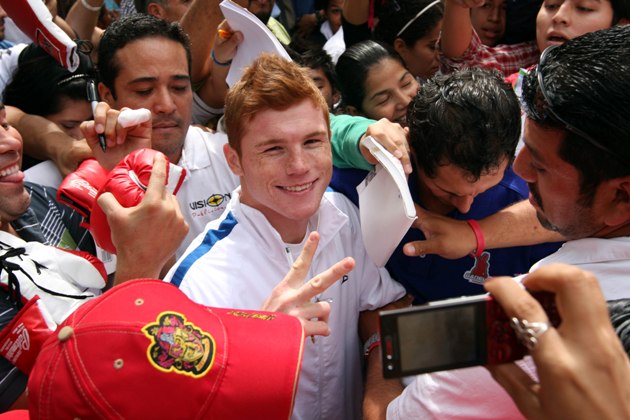 “You know what? I like challenges. Life is full of them. I like the challenges of the sport. Chavez has his pride, and I have my pride. So let’s see who has the most followers. He has his followers, and I have my followers who want to come and see me fight,” said Alvarez.

“Chavez-Martinez is the biggest fight of the year. It’s bigger than Pacquiao-Bradley because it’s a competitive fight that’s been building for quite a long time,” said Arum.

“The odds are 8-5. When is the last time that you’ve had a big fight where the odds were that close? The other fight is not a competitive fight. It’s not a serious fight.”