Of the many widely held beliefs in boxing, one of the oldest and hoariest holds that punchers are born, not made. Knockout artists are said to emerge from their mothers’ wombs with a genetic predisposition for taking their opponents out with one huge shot. Future fighters who come into the world without that particular gift presumably are consigned to careers of sticking and moving, and, more often than not, hoping for favorable judges’ decisions in matches that go the distance.

But the great Thomas Hearns, who will be inducted into the International Boxing Hall of Fame’s 23rd annual induction class on Sunday afternoon in Canastota, N.Y., is living proof that that old truism is a fallacy, or at least not entirely correct.

Hearns’ evolution from “The Motor City Cobra” – a skillful boxer with a serpent’s tongue of a left jab that enabled him to win 155 of 163 amateur bouts, but with only 11 victories on stoppages – was transformed into “The Hit Man,” a heavy hitter who won his first 17 professional outings, and 31 of his first 33, by knockout, almost all of which were produced by an overhand right that could turn out the lights on an opponent quicker than a blown transformer in the arena.

Emanuel Steward, the head honcho at Detroit’s decrepit Kronk Recreation Center who first worked with a gangly, teenaged Hearns five or six years after Hearns took up the sport at another gym in the city, said Hearns still stands as the foremost example of Steward’s oft-stated position that any boxer can ramp up his power quotient with the proper blend of dedication and instruction.

“I can make any fighter into a better puncher,” said Steward, who preceded his most renowned pupil into the International Boxing Hall of Fame when he was inducted in 1996 in the non-participant category. “When I got Tommy, he didn’t hit all that hard, but I knew I could get that out of him.”

Hearns (61-5-1, 48 knockouts) doesn’t disagree, citing Steward as a primary influence in one of boxing’s more remarkable career evolutions. Maybe it was just a case of that long, lean physique filling out and natural maturity helping to develop his man-strength, but Hearns took to Steward’s teachings readily and, obviously, with tremendous success. In 2003, THE RING had Hearns at No. 18 on its list of the 100 best punchers of all time, and there are quite a few boxing historians who would place him higher in any compilation of the most exciting fighters ever to lace up a pair of padded gloves.

Oh, sure, The Hit Man was fortunate to have come along in a talent-rich era in which three other Hall of Fame fighters – Sugar Ray Leonard, Marvelous Marvin Hagler and Roberto Duran – also toiled, but Hearns fought them all, and eagerly so, as well as any number of other luminaries who he sought out because, well, greatness is not derived from avoiding anyone with as much potential for beating you as you have of beating him.

“You got to challenge everybody,” Hearns, 53, told me when I contacted him for this story. “To be the best, you got to fight the best. I thank God I fought everybody I should have fought, guys that the public wanted to see me fight. I didn’t duck nobody. If we were in or around the same weight division, then bring it on. Show me what you have.”

That willingness to mix it up with the most dangerous dudes of his era is one of the reasons Hearns has become a cherished icon among boxing fans, someone whose stature increases every time Manny Pacquiao and Floyd Mayweather Jr. snarl at one another from afar, but make no progress at actually sharing the same ring.

How much poorer would the fight game have been had Hearns, Leonard, Hagler and Duran looked at one another and all cautiously said, “Uh-uh, no way. There are safer ways for me to go than to tangle with that man.”

Ironically, as is the case with the late, great Joe Frazier, who is as renowned for the courage and determination he displayed in his two defeats to Muhammad Ali as he is for some of his more notable victories, Hearns is destined to be as remembered for a pair of thrilling losses as his watershed conquests of Pipino Cuevas, Duran and, when many thought him to be well past his prime, Virgil Hill. 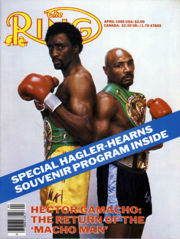 His third-round technical-loss to undisputed middleweight champion Hagler on April 15, 1985, at Caesars Palace has been rightly called “Eight minutes of fury,” and is on virtually everyone’s list of most action-packed, mesmerizing scraps of all time. The two men literally threw themselves at one another in the first round, firing a combined 165 punches, by computer count, only 22 of which (all by Hearns) were jabs.

Hagler returned to his corner after that first round with a nasty cut to his forehead that would take four stitches to close, and Hearns, whose competitive instinct to meet Hagler’s fire with flames of his own ran counter to Steward’s strategy that called for a more controlled tempo, to a scolding from his longtime manager/trainer.

Even Richard Steele, the third man in the ring for Hagler-Hearns, had his breath taken away by what he’d witnessed in that bomb-swapping first round.

“I’ve been refereeing for 15 years,” Steele said at the time, “and I don’t think I’ve ever seen a fight with that much intensity.”

Hagler, who might have been in danger of being stopped on medical grounds had the blood flow into his eyes worsened, landed a putaway blow in Round 3 before the ring doctor could step in again, leaving Hearns with recriminations that continue to this very day.

“I wish I could have fought Hagler again,” Hearns told me. “I know I could have changed the outcome. That one stuck in my head for a long time. It’s still there. But there was nothing I could do about it. The man retired before I could get him a second time.”

Hearns did get Leonard a second time, settling for a draw in their June 12, 1989, rematch, although the consensus was that he probably deserved a better shake in the scoring after knocking the Sugar man down in the third and 11th rounds. Still, half a loaf is better than none, and Hearns came away at least partially satisfied that he had exorcised whatever demons still remained from the much-anticipated welterweight unification showdown of Sept. 16, 1981, when Hearns, leading on all three official scorecards through 13 rounds, was stopped in the 14th.

“That little monster (Leonard-Hearns I) has chased me for eight years,” Hearns is quoted as saying in George Kimball’s fine book, Four Kings, which details each of the nine bouts in which Hearns, Leonard, Hagler and Duran tested themselves against one another. “I’ve never gotten over that loss. I think about it every day. Sometimes I think I hate him. You have no idea how that man has weighed on my mind.”

What is surprising about that showdown – Leonard’s WBC 147-pound title belt was on the line, as was Hearns’ WBA strap – is that so many knowledgeable people could be so wrong about the fighters and how the fight would transpire.

Pat Putnam, writing in Sports Illustrated, offered his opinion that “By a long shot, Leonard is the superior boxer. Hearns, who fancies himself a boxer, is pure slugger, about as scientific as a wrecking ball.”

Came fight night, however, Hearns and Leonard demonstrated that not only had Putnam made a miscalculation, but

Steward, too. Manny had opined beforehand that “Tommy has the greatest chin I ever trained, and he isn’t easy to hit. He just holds out those long arms of his and says, `Stop.'”

Hearns, the notorious blaster, built his lead by utilizing that telephone pole of a jab, which Leonard later described as “the best of anyone I fought.” Meanwhile, the supposed slickster, Leonard, winged all manner of heavy shots, more than a few of which reached and rocked Hearns’ chin, which later proved to less sturdy that as portrayed by Steward, as evidenced by his stoppages at the hands of Hagler and Iran Barkley.

But lest anyone forget, Hearns’ estimable career should be framed by so much more than his rousing setbacks to Leonard and Hagler. He was electrifying in winning the first of his six titles in different weight classes, a second-round blowout of Cuevas on Aug. 2, 1980, a fight Hearns rates as his favorite boxing memory. And, of course, his savage, second-round TKO of Duran on June 15, 1984, underscored just how obliterating Hearns’ right could be when it landed flush.

“Roberto Duran is a legend,” Hearns said. “Doing some of the things I was able to do in that fight is so significant in my life. A lot of fighters tried to do to Duran what I did, but they couldn’t. I went out there and destroyed him with my punching power.”

So now the Hit Man moves on to what could be his greatest thrill yet in the sport that made him famous, induction into the same International Hall of Fame on whose wall hangs the plaque of his idol, Muhammad Ali. Sure, he’s going in later than his most recognizable foes – Hagler was inducted in 1993, Leonard in 1997, Duran in 2007 – but that’s only because he stuck around longer than the others, fighting for the final time as a 47-year-old, a 10th-round TKO of Shannon Landsberg on Feb. 4, 2006. Not surprisingly, Hearns was voted into the IBHOF in his first year of eligibility.

“I never imagined being a Hall of Famer,” said Hearns, who expects to be cheered on by seven to 10 members of his family, including his son, current middleweight Ronald Hearns (26-3, 20 KOs), not to mention thousands of fans who can never forget who he is or what he brought to his trade. “I just wanted to be the best fighter I could possibly be, and a world champion.”

Joining Hearns as inductees in the modern category – fighters who had their last bout no earlier than 1943 — are former flying and junior bantamweight champion Mark “Too Sharp” Johnson (44-5, 28 KOs) and the late welterweight Cocoa Kid (177-56-10, 48 KOs).

Inductees in the non-participant category include trainer Freddie Roach and ring announcer Michael Buffer, as well as the late promoters Hugh D. McIntosh and Rip Valenti.

Showtime analyst Al Bernstein and longtime journalist Michael Katz are the new members in the observer category, and fighters who are going in posthumously, in the old-timer division, are Newsboy Brown, Leo Houck and Jake Kilrain, as well as James Wharton in the pioneer category.