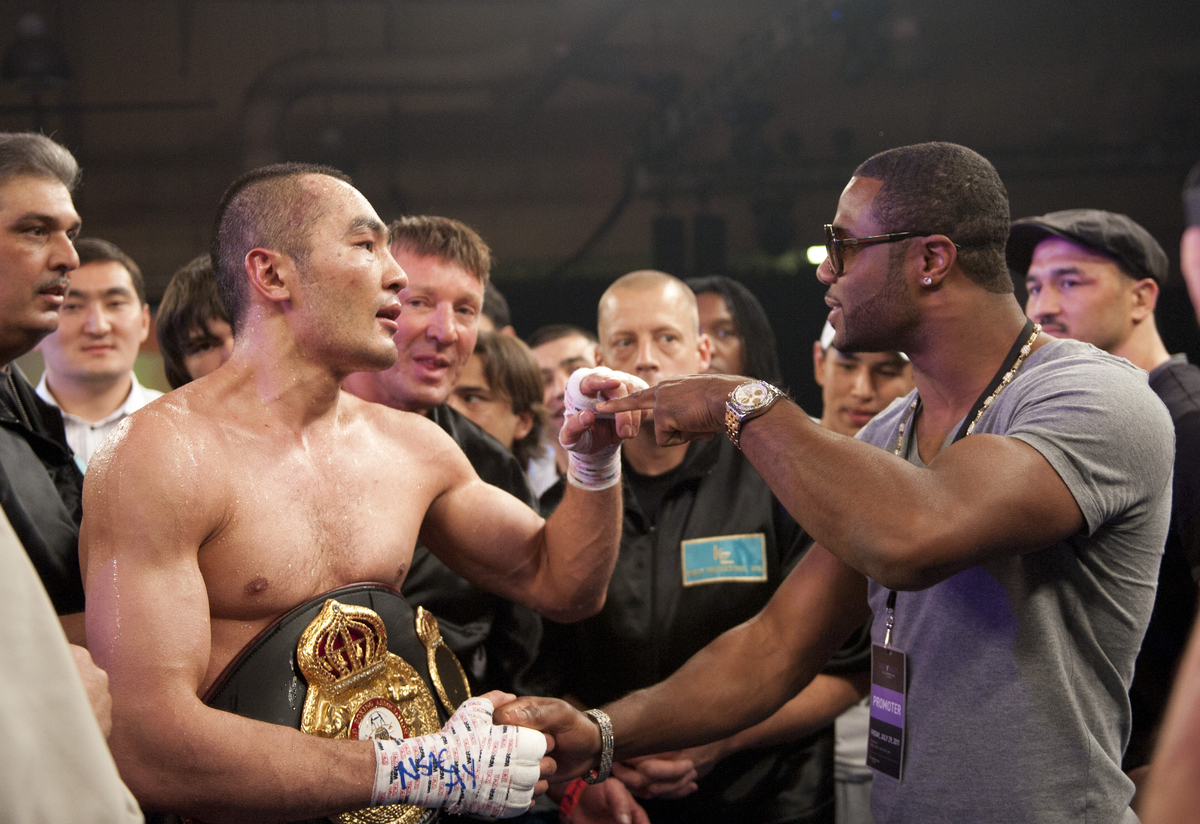 Editor’s note: This story was originally published in THE RING magazine.

Somewhere, curled deep inside Beibut Shumenov, is the baby boy. He’s laying there, listless and shriveled, his skin blue against a white blanket. His hands twitch. His tiny chest pounds rapidly as he gasps for air. He has no energy to cry. He’s unaware of the tangled web of tubes and cords plugged into his body, unaware that he is dying. Somewhere inside him, that child is still there.

Today, Shumenov considers himself a walking miracle – and he should. Once frail and clinging to life, the 28-year-old WBA light heavyweight titleholder from Shymkent, Kazakhstan now has everything. Everything, perhaps, except the undivided attention of the boxing world.

But that could change soon.

Shumenov himself is something of an oddity. On the one hand, he’s a muscular 6-foot-2 fighter with boundless energy. On the other, there are things about him that make you wonder why he has chosen this nasty vocation to begin with: He possesses a law degree, can speak Russian, English, Turkish, Kazakh and Uzbek, and comes from a wealthy, emotionally stable family. Now he is looking to grow his name and brand far beyond his popularity in Kazakhstan.

But there is something else different about him, something that separates him from the gnarled, cliched backstories of most world-class fighters. There is something else that lingers. For Beibut (pronounced BAY-boot), it goes back to before Kazakhstan became the last of the Soviet republics to declare its sovereignty in December 1991. It goes back to a bottle of milk, two women arguing, and the baby they were supposed to be watching.

“My aunts were supposed to be watching me and they fed me poison milk,” said Shumenov in broken English. “I was staying with my [paternal] grandmother while my father was working for the government as an accountant in Shymkent. My father came back and found me blue, and rushed me to the hospital.”

Beibut’s father, Amirkhan, and mother, Saule, were told that the poison had seeped into their son’s blood stream. Doctors gave him a few days to live. They tried desperately to purge the toxins, but his tiny veins wouldn’t allow for a needle. Instead, they injected an IV into his temple. Then they waited ÔÇª and waited. In the meantime, Shumenov’s mother and father clung to each other, anxious, praying that their baby boy would somehow survive.

But even if Beibut did survive, his parents were warned, the experience would weaken his immune system; make him susceptible to kidney failure, or leave him gravely ill from a common cold. He would grow up an indolent child, with a low tolerance for anything physical.

“I can’t even imagine what my parents were going through then,” Beibut said. “The doctors gave me a couple of days to live; I wasn’t going to make it. My parents told me they were crying all of the time. They felt like they lost me already. They were hoping for a miracle, and that miracle happened to me. But I can’t forget what it was like growing up. I did survive, but I was sick for part of my childhood. My lungs were always giving out. Sometimes I had no energy to do anything.”

Young Beibut stood on the fringes. Other children played soccer and basketball. Beibut tried, but never had the stamina to play for very long.

“I always wanted to become a strong man. What brought me to that was watching Bruce Lee movies,” Shumenov recalls. “That brought interest to the martial arts. In the Soviet Union then, everyone that lived in that time, they know how hard it was. If you were a growing boy, even little boys, you’d have to be like a man. When I was in second and third grade, if a fifth or sixth grader took money from us, you couldn’t say anything about it. You would be looked at as weak. That was our culture.”

Shumenov received no breaks at home, either; his younger brother, Chingis, picked on him mercilessly. “I got it everywhere, even home. I was weak physically, but I think what helped get through it was that I had a strong will,” he said. “Running, playing basketball, soccer, I wasn’t able to do those things very well, but I never gave up trying.”

As he struggled with his own situation, the world around Shumenov was quickly evolving. The Shumenovs, like so many families, had become accustomed to a certain way of life. They were raised under the iron scrutiny of Soviet communism, where you risked imprisonment if you tried to start a business. His parents – father an accountant and mother a school teacher – worked long hours; like other citizens, they were dependent on the government for employment, health benefits and education. But the old Soviet Union was crumbling. On Dec.16, 1991, Kazakhstan, the largest of the former Soviet republics, declared its freedom. The Shumenovs were free, but freedom is all they received.

“We didn’t have enough money to buy bread,” Shumenov remembers. “My father is a lovely man, he’s one of 10 children. He loves his brothers and sisters, but on the days our parents sent us to their homes to borrow money, they closed the doors on us. My parents, even today, they support all of our relatives. Before the independence, everyone was the same. After, my family had to adjust. We had some good days and bad days. My father was very trusting. My parents would have arguments. My mother would tell him, ‘Don’t do this.’ My father is stubborn, he’d do it anyway. We went through a few failed businesses in the beginning. But everyone went through those hard days. We had limited food. You went from a standard salary to trying to make it on your own.”

It was amid these difficulties that Shumenov’s life took a fateful turn. As a kid inspired by Bruce Lee movies, Shumenov had trained in martial arts to increase his strength and build his body. He had no aspirations beyond that. Then, as a teenager, he discovered Mike Tyson. He saw the viciousness in Tyson’s left hook and how he knocked opponents out cold. To a teenager who grew up a wan child, that kind of power was intoxicating. Suddenly, boxing had him in its grip.

At the same time, his family found itself in a perfect storm of another sort. Amirkhan and Saule began applying their

ceaseless work ethic into marketing bazaars and quickly made a fortune. Shumenov embarked on an amateur boxing career in 1996 under the tutelage of Kazakhstan’s nationally renowned coach, Nurgali Safiulin, training at Central Stadium Boxing Gym in Shymkent, which turned out 11 of the 12 Kazakhstan national champions in ’96.

“I liked it, but I didn’t take it seriously, because everything seemed easy to me,” Shumenov admits. “My aim was winning a gold medal at the 2004 Olympics in Athens. But I’ll be honest, I didn’t think I had to prepare myself to that kind of level. I went there with the idea of winning a gold medal. My trainer was confident, I was confident. I had a meeting with the Kazakhstan president. He was relying on me to win the gold medal. There was that kind of pressure.”

But expectations would not be enough. Competing as a light heavyweight, Shumenov defeated Poland’s Aleksy Kuziemski in the first round but broke his hand during the fight. He lost to Turkey’s Ihsan Yildirim Tarhan in the second round, essentially fighting with one fist.

As often happens after an Olympic loss, the defeat became much more than that. Shumenov’s dreams were shattered. He wanted to quit.

“You never know, if I didn’t break my hand, who knows what would have happened,” said Shumenov, who earned his law degree the year before Athens. “But I did. And it did get me down. After the Olympics, I decided to quit. I was working out and blew up to 230 pounds. I was still kick boxing, lifting weights and wrestling. I lost some personal discipline. I look back on those times and wonder what I was thinking. I was training hard, and living a night life. I always prided myself on working hard, and those days, I didn’t have motivation or dedication. I let people down. I felt I let my parents down, my country down. I felt terrible. I lost interest in everything.”

Following a few years of wandering, Safiulin called his prized former pupil and told him to never fight amateurs again. Safiulin, too, had quit the sport because of Shumenov. “Out of respect for him, I decided to turn pro,” Shumenov said. “I couldn’t go back after Safiulin left. I blamed myself. Then I looked at all those pros. I wasn’t confident that I would be able to succeed. I thought they were super humans. I watched Tyson, Erik Morales, Roy Jones, Oscar De La Hoya, Bernard Hopkins. They’re not regular humans. They’re super humans. I thought I’d get knocked out in the first round. I thought my amateur background would help me, but the pro level is a completely different sport. Pro boxing is brutal.”

Not too brutal for Shumenov to succeed. After only 13 fights, he has a major title. He carries a 12-1 (8 knockouts) record, having smashed veterans Donnell Wiggins, Lavell Finger and Byron Mitchell on his way up and scoring decision victories over Epifanio Mendoza and Montell Griffin. He avenged his lone loss, beating Gabriel Campillo for the WBA belt in January 2010, and is now aiming for the best at 175. That might include the winner of the Oct. 15 Hopkins-Chad Dawson fight, if the winner is willing.

“One thing I will tell you about Beibut, he’s dedicated to improving all of the time,” says Hall of Famer Don Chagrin, Shumenov’s adviser. “He’s only had 13 fights, and he makes some mistakes, but he’s right there to correct them. Given proper matches, there’s no telling how good Beibut can be. Beibut can catch on [in the U.S.] … you know how this business is; one signature fight can put him over the top.

“I like him going forward. It’s how we see things and future opponents. Beibut is a volume puncher and he has strength, and a good size. Opponents underestimate him, because they see the few fights he’s had. But what they don’t realize is that he’s trained all of his life. He has an extensive amateur career, and as a kick boxer. If he can get guys that will fight him, Beibut will do very, very well.”

His parents have never been keen on his career choice. They want him home practicing law, or running one of their many bazaars. But Beibut forges ahead, buoyed by daydreams about world championships and attaining boxing immortality, like the legends he watched in his youth.

“My parents are very proud of me, even though they are against me boxing,” Shumenov said. “Chingis gets on the phone right away to tell them how I did after each fight. I realize I have to do more to do to become a world champion, and I’m stubborn enough to keep working for it.”

It’s a stubbornness that is part of him, that shapes him from the inside. “You can say it goes back to when I was a baby fighting for my life,” he said. Indeed, that earlier version of him still lives, and together they fight for the future with the intensity of survival itself. Though he is now anything but frail, in many ways he is still “Baby Blue Beibut.”