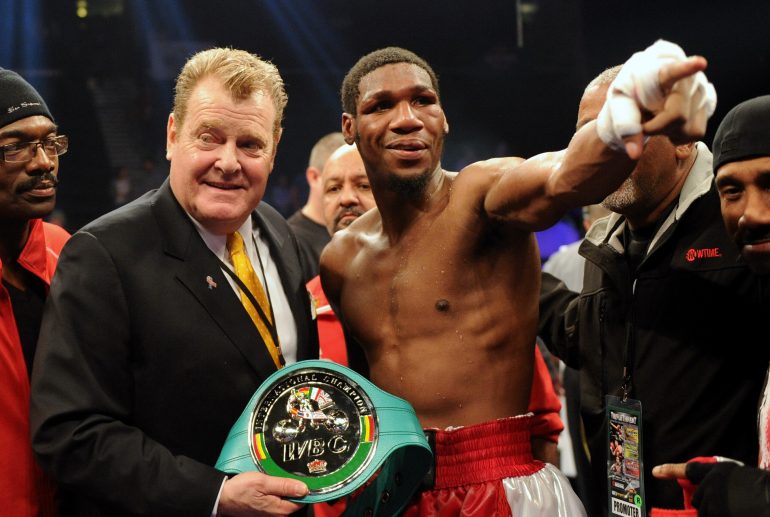 Former light heavyweight champ Antonio Tarver says that undefeated cruiserweight Lateef Kayode “was so used to so many people telling him how great he was, that he didn’t prepare himself for constructive criticism” of the sort that Tarver asserts he was making as a Showtime boxing analyst during some of Kayode’s previous fights.

Annoyed by several assessments of his abiliites, which Kayode has viewed as negative, the unbeaten fighter is highly-motivated for his Showtime-televised clash with Tarver at Home Depot Center, in Carson, Calif., on Saturday.

The sentiments of both Tarver (29-6, 20 knockouts), who turned 43 in November, and Kayode (18-0, 14 KOs), whose 29th birthday was in March, are expressed in a promotional video from Showtime that can be viewed by clicking here.

Kayode agrees, arguing that Tarver’s been unfair to him.

Says Tarver: “I was just being honest.”

Headlining the “Four-warned” undercard will be a 10-rounder between Dyah Davis (21-2-1, 9 KOs) and contender Sakio Bika (29-5-2, 20 KOs) that will air live on Showtime Extreme prior to the quadruple-header.

Rodriguez has the chance of a lifetime against Trout, a southpaw who has served as a sparring partner to both RING middleweight champ Sergio Martinez and RING No. 6-rated middleweight Matthew Macklin.

Rodriguez battled to a majority draw and a unanimous decision over Pawel Wolak last July and December. The first Rodriguez-Wolak bout was named Fight of The Year by the Boxing Writers’ Association of America.

When he met Wolak the first time, Rodriguez was trying to end a run of three losses in his previous four bouts and a nearly one-year ring absence while fighting at his highest weight class ever in his 154-pound debut.

Even Trout noticed the difference in Rodriguez from the firsst Wolak bout to the next.

“From the first fight, I saw that Delvin had made an adjustment later on in that fight. He came on stronger as the end of that last fight. In the rematch, Delvin was able to just take over from the beginning to the end,” said Trout.

“He did that the whole night. I saw that coming from the first fight. I knew that he would take over in the second fight, and he did. He put on a good performance, and it was exciting. But that’s fighting against a limited Pawel Wolak.”

Trout believes that he will make it more difficult than Wolak did for Rodriguez, who, nevertheless, has confidence.

Rodriguez lost a split-decision for the IBF welterweight belt against Isaac Hlatshwayo in August of 2009, and unanimous and majority decisions to Rafal Jakiewicz and Ashley Theophane in November of 2009 and July of 2010, respectively.

All three losses were at 147 pounds, a weight Rodriguez says he weakened himself to make.

“I have a whole different trainer and a whole different and new team. I think that a big difference is that I’m at 154, where I belong. When I was making 147, I was killing myself for a year and a half. I would make it, but once I would step into the ring, I had nothing to give,” said Rodriguez

A southpaw who is making his United States debut, Malinga is looking to make an impression in pursuit of his third straight win since being stopped in the first round by Hozumi Hasegawa during a failed attempt to win the WBC belt in March of 2009.

“Training was superb. We trained very hard for this fight. We arrived in the U.S. on Sunday and we are ready to go,” said Malinga. “I’m very excited to fight here and make my U.S. debut. I plan to show the fans what they’ve been missing.”

In Santa Cruz, Malinga faces a fighter who has scored nine straight knockouts, including a fourth-round stoppage of Alejandro Hernandez in January.

“I don’t know anything about him [Santa Cruz] except that he’s right handed, but I’m preparing for anything,” said Malinga. “I’m very fit and ready to fight. It’s very important for me to win my U.S. debut. I must win in order to come back again and fight.”

Southpaw junior middleweight title contender Sechew Powell will face Gabriel Rosado on Friday night at the Sands Casino Resort in Bethelehem, Pa., on NBC Sports Network’s Fight Night, having replaced Joel Julio, on May 4, when the latter pulled out of the matchup for undisclosed reasons.

Powell, of Brooklyn, N.Y., already had been sparring with Delvin Rodriguez (26-5-3, 14 KOs) in advance of Rodriguez’s matchup with unbeaten left-hander Austin Trout (24-0, 14 KOs), whose WBA junior middleweight belt will be on the line on Saturday night.

Also on the Powell-Rosado card, which is being promoted by Main Events President Kathy Duva, is a co-feature between welterweights Ronald Cruz (16-0, 12 KOs) and Prenice Brewer (16-1-1, 6 KOs).

DON KING RETURNS TO THE HARD ROCK IN FLORIDA

American-born Cuban Joey “Twinkle Fingers” Hernandez (21-1-1, 12 KOs) will face Missouri’s Brandon “The Business” Baue (12-6, 10 KOs) on a June 23 card that is being promoted by Don King from the Seminole Hard Rock Hotel and Casino in Hollywood, Fla.

In another bout, Angelo “La Cobra” Santana (12-0, 9 KOs), a Cuban fighting out of Miami, will be matched against WBC silver featherweight beltholder Justin “Le Voodoo” Savi (26-1, 18 KOs), of Cotonou, Benin.

Welterweights Joseph Elegele (12-1, 10 KOs), of Winter Haven, Fla., and Philadelphia native Lanard Lane (13-1, 8 KOs) will meet in the co-main event of the card headlined by the WBA lightheavyweight beltholder Beibut Shumenov (12-1, 8 KOs) and Enrique
Ornelas (33-7, 21 KOs) in The Joint at the Hard Rock Hotel and Casino in Las Vegas.

Promoted by Golden Boy Promotions and Shumenov’s KZ Events, the show is to be televised live on FOX Sports Net and FOX Deportes as well as on a delayed basis on FUEL TV.