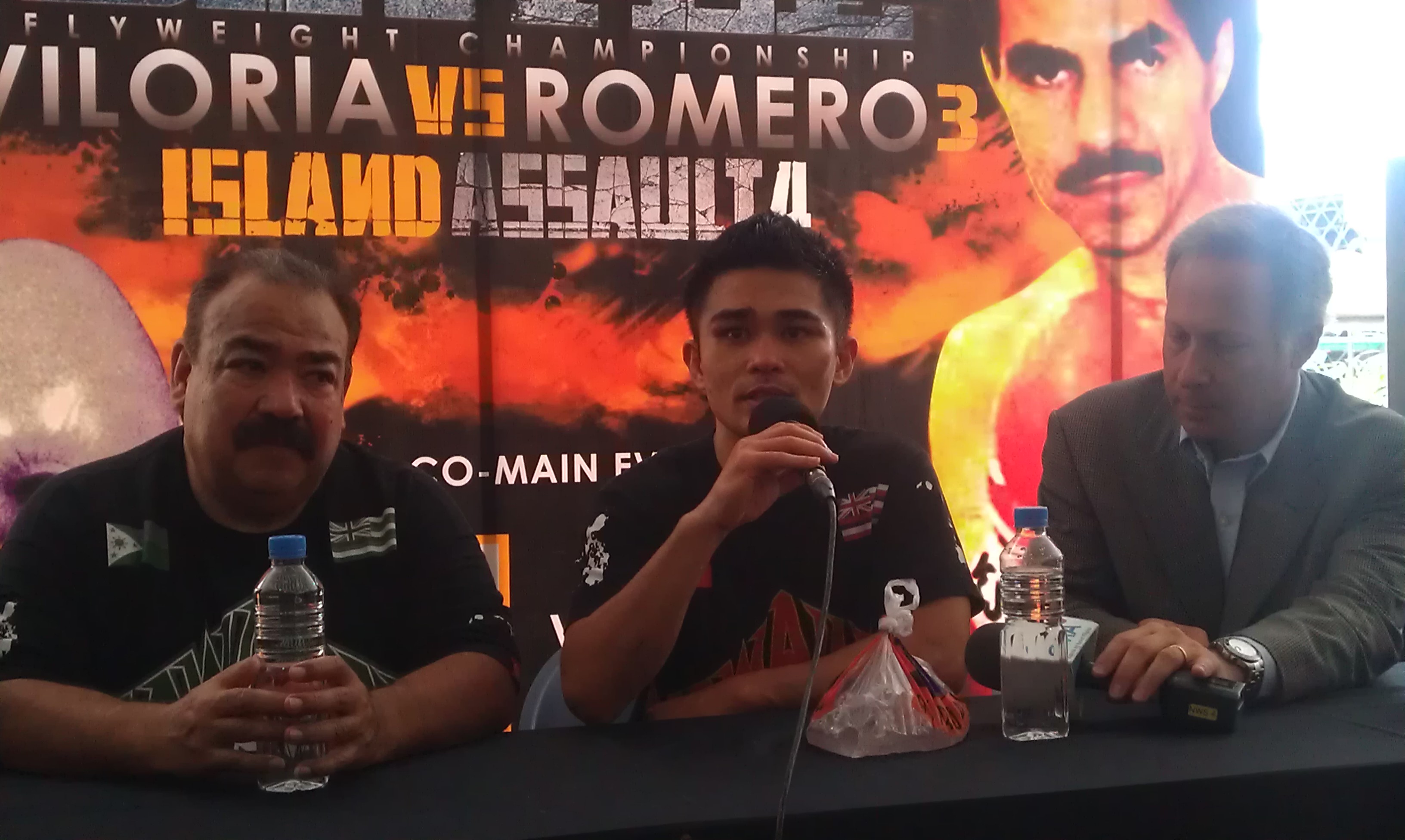 Brian Viloria is flanked by longtime assistant trainer Ruben Gomez (left) and manager Gary Gittelsohn (right) at the post-fight press conference for his ninth-round stoppage of Omar Nino. Gittelsohn says HBO and Showtime are interested in Viloria’s next fight.

PASIG CITY, Philippines – For six years Brian Viloria has had to live with the ghost of his first career defeat at the hands of Omar Nino Romero in Las Vegas. Viloria sought vengeance three months later in a rematch but had to settle for an unsatisfying draw that was eventually changed to a no contest after Nino tested positive for amphetamines.

With his ninth-round TKO victory over Nino on Sunday morning, Viloria finally put that ghost to rest, completing the second defense of his WBO flyweight title at the Ynares Sports Complex in Pasig City, Philippines. The time of the stoppage was 2:07.

Viloria (31-3, 18 knockouts), of Waipahu, Hawaii, had his troubles early in the fight, missing the awkward Nino (31-5-2, 13 KOs), of Guadalajara, Mexico, with the heavy right crosses and left hook bombs that bedeviled Giovani Segura in his previous fight. Viloria finally began to find the target in the fourth round, rocking Nino with a right cross that sent the 36-year-old veteran into the ropes on rubbery legs. Viloria was closing in on a knockout but Nino reached into his bag of tricks and landed two clear low blows to draw a warning and slow the pace.

By the fifth round Nino began to bleed over his left eye from a Viloria right cross. Nino continued to make the fight ugly, lunging in without warning with jabs and body punches, many of which strayed low.

Viloria finally put his stamp on the fight in the ninth round, landing a right cross-left uppercut-right cross combination that sent Nino drifting into the ropes. Two more right crosses convinced referee Michael Ortega to mercifully stop the bout.

“It’s a big psychological win for us,” said Viloria, who dedicated the fight to the recently departed Andy Ganigan, who was the first Filipino-American slugger from Hawaii to make waves internationally. “I feel like I can close a chapter in this book now. I feel like I yanked a monkey off my back now.

“I think he was slower than when I last fought him,” continued Viloria. “He lost a little of his speed and I was able to find him a lot better this time around and adjust to his game plan. He’s really awkward, he has a real awkward stutter step that throws you off because you don’t know if he’s going to come in or stay back.”

Still, assistant trainer Ruben Gomez acknowledges that Nino would always be able to provide a difficult challenge to Viloria.

“Like Superman has kryptonite, Manny Pacquiao has Juan Manuel Marquez, we have Omar Nino,” said Gomez, who has been in Viloria’s camp since the 2000 U.S. Olympic representative first turned pro. “It’s so hard to look good against him but I’m happy that [Nino] is not hurt and I’m happy we were able to win in a convincing fashion.”

The victory provides closure for the Filipino-American Viloria, who won his first title at 108 pounds with a first-round knockout of Eric Ortiz, only to lose it to Nino and drop another decision to Edgar Sosa shortly after. Viloria then rebuilt his career, knocked out Ulises Solis in a mild upset to win the IBF108-pound title before it in a stunning upset to Carlos Tamara shortly after.

Viloria rebounded again by defeating Julio Cesar Miranda to win a title at flyweight and made a successful defense in December over Giovani Segura.

“If people knew the story of how he won his first world title with the effortlessness of the Gods then lost it so surprisingly then came back and won a title again, lost and won it again… It’s a lesson to people who feel they can’t get up after getting knocked down,” said Viloria’s manager Gary Gittelsohn.

Gittelsohn pointed to a pair of exciting potential rivals – WBA flyweight titleholder Hernan “Tyson” Marquez of Mexico and unbeaten WBA junior flyweight beltholder Roman Gonzalez of Nicaragua – as fighters in their crosshairs. Gittelsohn also said that both HBO and Showtime have “expressed interest” in Viloria’s next fight.

“There’s a new executive switch over at HBO and Showtime…in the past they’ve never gone below 115 pounds,” said Gittelsohn. “They see that there’s a lot of interesting talent in the flyweight divisions.

“I would love to make a unification fight with ‘Tyson’ Marquez. It would be a great fight and it would be the kind of fight that we could sell to HBO or Showtime, and hopefully GMA as well.

“[Gonzalez has] got a beautiful style of boxing, he’s undefeated and there have been lots of talk percolating in the boxing circles about Brian and Gonzalez meeting. I don’t know if it’ll be next but we would be up for it if he wants to move up in weight.”

While either fight would please the boxing world, Viloria has placed priority on the will of one person in particular.

“It’s time for a honeymoon,” said Viloria, who plans to take his wife Erica to Europe. “I promised my wife two years ago. When we get back from our trip we’re going to sit down and figure out what the plans are.”

Just a few weeks ago, Rodel Mayol’s adviser Michael Koncz told the press that his fighter would not be ready to face former WBO flyweight titleholder Julio Cesar “Pingo” Miranda on May 12, citing insufficient training time between his canceled title fight with WBA flyweight champ Hernan Marquez in March and when the Miranda fight was offered. Mayol insisted, eager to get in the ring after a wasted training camp.

After ten rounds with “Pingo”, Mayol proved that he knows his body better than anyone else.

Mayol, of Mandaue City, Philippines, came out on fire, dropping Miranda of Tampico, Mexico a minute into the fight on a left hook set-up by Mayol’s mastery of range. Mayol, 30, didn’t rush in to finish Miranda, 31, returning to the approach that brought him success initially.

That patience paid off as he scored a second knockdown in the following round on two left uppercuts that were ripped right from the Ricardo Lopez playbook. Miranda was tough however, and began to wear down the Filipino with his inside body attack and physical strength but a knockdown in the fifth that started on a Mayol right hook to the body sealed his fate on the scorecards.