Khan-Garcia possible for July; Golden Boy seeks to have Khan’s titles returned to him 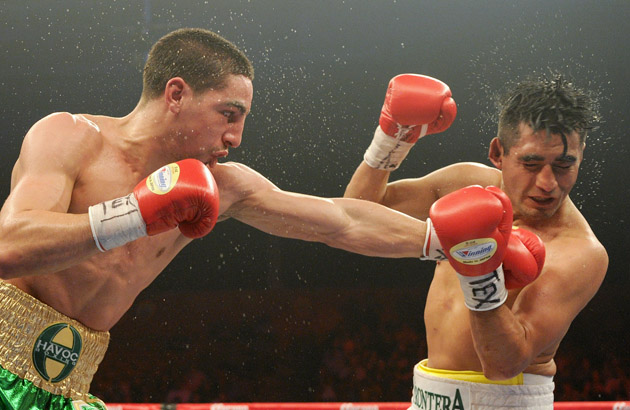 Dethroned by Lamont Peterson (30-1-1, 15 knockouts) via split-decision in December, Khan (26-2, 18 KOs) had a scheduled May 19 rematch canceled after Peterson tested positive for a banned substance.

During a Thursday meeting with Schaefer concerning replacement dates and opponents for Khan, a name which surfaced was that of Garcia (23-0, 14 KOs), who dropped four-division titlewinner Erik Morales in the 11th round on the way to dethroning him by unanimous decision in March.

It was the third straight triumph over a current or former world titleholder for the 24-year-old Garcia, following consecutive decisions over ex-beltholders Nate Campbell and Kendall Holt in April and October, respectively.

“I think that it’s going to be either July 7 or July 14, but most likely, July 7. One of the names we are discussing is the current WBC champion, Danny ‘Swift’ Garcia.”

Peterson-Khan will be reviewed by the IBF, which won’t decide whether or not to strip Peterson of their belt until after his medical records are examined by IBF President Daryl Peoples and an organization-appointed physician, according to IBF Public Relations Director Jeanette Salazar.

Peterson admitted to using synthetic testosterone in November prior to facing Khan, claiming it was for medical reasons. Peterson had surgically implanted “testosterone pellets”inserted into his hip by Las Vegas-based Dr. John Thompson on Nov. 12 after he was diagnosed with an abnormal or low testosterone level.

Also, citing “too much controversy” surrounding the drug test, the IBF no longer plans to honor the first Peterson-Khan bout as Fight of The Year at the organization’s May 29 convention in Honolulu.

“I think that’s obviously the right thing to do,” said Schaefer. “I feel bad for Amir Khan, who fought his heart out.”

Peterson and Khan contractually agreed to have their blood and urine randomly tested by the Voluntary Anti-Doping Association (VADA), whose president and founder is Margaret Goodman.

Goodman informed Nevada State Athletic Commission director Keith Kizerthat Peterson’s “urine specimen … was collected on March 19” and that its test results were “consistent with the administration of an anabolic steroid such as testosterone.”

In an interview with RingTV.com, Peterson said that he passed the pre-fight urine test conducted by the Washington D.C. Boxing and Wrestling Athletic Commission before facing Khan.D.C. commission director, Scottie Irving, also has yet to render a decision.

Schaefer said he plans to take action on behalf of Khan.

“Amir certainly should have the belts. We’re going to be sending out within the next few days to the IBF, the WBA the paperwork where we will ask the commission in Washington to rule the fight a no-contest,” said Schaefer.

“We will ask the IBF and the WBA to re-instate Amir Khan as their champion. So our hope is that Amir’s next fight will be for all three belts.”