During a quiet, Friday afternoon workout at the Wild Card Gym in Hollywood, Calif., Manny Pacquiao could be heard pounding the mitts worn by his trainer, Freddie Roach, with a vigor that can best be described as “renewed,” according to Top Rank CEO, Bob Arum, who was in attendance.

Pacquiao (54-3-2, 38 knockouts) will be taking a 15-bout winning streak that includes eight stoppages into the June 9 defense of his WBO welterweight title against WBO junior welterweight beltholder Tim Bradley, which will take place at the MGM Grand in Las Vegas.

Arum said Pacquiao has picked up steam since landing in Los Angeles on Saturday night from Baguio City, Philipines.

“When I saw him on Monday, he was still a little jet-lagged. But today, you know, I’ve never seen him physically look the way that he does,” said Arum.

“The fact that he’s living a good life now is really beginning to show in his demeanor, and in his face, and in the way that he’s carrying himself.”

Pacquiao is coming off November’s disputed majority decision victory over WBO interim junior welterweight beltholder Juan Manuel Marquez (53-6-1, 39 KOs), the third bout of a trilogy in which each fight’s outcome has triggered controversy.

Roach told The Los Angeles Times’ Lance Pugmire that Pacquiao was distracted for the bout with Marquez, having been served divorce papers the eve of the bout on behalf of his wife, Jinkee.

Roach said Pacquiao had fallen into a tawdry lifestyle that included late night basketball games, as well as “girls and everything that goes with it.” Now, though, Pacquiao had taken several steps to clean himself up, including selling his casino and his nightclub.

“Now, he’s back with his wife, reading the Bible every day,” said Roach, “and he’s given up basketball.”

In March, Pacquiao told the morning show Rated Korina on ABS-CBN that he no longer gambles and that he’s done with womanizing. 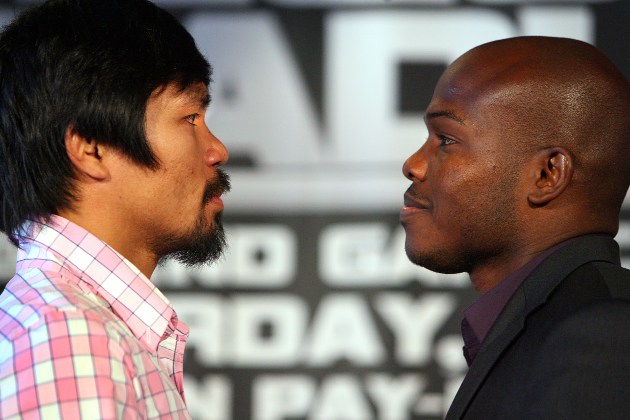 Arum said that he sees the change.

“Certainly, he was leading a life of gambling, and the apartment was always like a carnival,” said Arum. “But it’s totally different now. He’s got a youth about him and he just looks more healthy than I’ve ever seen  him.”