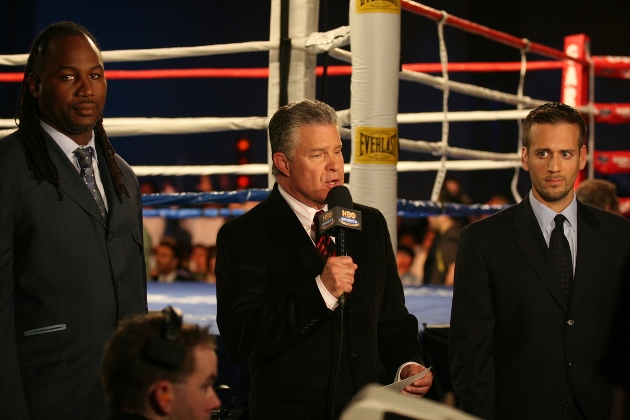 Four-time Sports Emmy Award winning broadcaster Jim Lampley told RingTV.com on Wednesday that the Lamont Peterson–Amir Khan drug testing controversy will be a topic of his new boxing show, The Fight Game, to be aired on HBO beginning on Saturday at midnight.

After Peterson tested positive for a banned substance, his May 19 rematch with Khan, whom Peterson defeated in December, was canceled.

“It will be addressed on the show Saturday night,” said Lampley. “There will definitely be content on the show related to Peterson-Khan. That’s obviously a story that we will be trying to get to.

“So Peterson-Khan will be addressed, and I can’t tell you exactly the nature of what we will be doing about it other than we will be trying to update it as much as we can.”

Peterson and Khan contractually agreed to be randomly drug tested by the Voluntary Anti-Doping Association (VADA), whose president and founder is Margaret Goodman.

Goodman informed Nevada State Athletic Commission director Keith Kizer that Peterson’s “urine specimen…was collected on March 19,” and that its test results were “consistent with the administration of an anabolic steroid such as testosterone.”

“I have a very strong interest in what Margaret is doing because she has a specific orientation to the ring. It’s not as if this is someone whose greatest orientation is drug testing perse,” said Lampley.

“She is not someone who is coming into boxing with a limited perspective on what happens in the ring. Margaret is a doctor whose background with relation to athletics is that she was a ring physician.”

Lampley said the show would also deal with the news and issues surrounding the sport, including perhaps those involving WBC welterweight and WBA junior middleweight beltholder Floyd Mayweather Jr. and WBO counterpart Manny Pacquiao, among other things.

“Drug testing is unquestionably a large topic which we will cover,” said Lampley. “However, I don’t want to allow it to become so predominant a subject that viewers would say to themselves, ‘okay, I’m going to get something about drug testing everytime that I tune into that show.’ Beyond that, I sincerely hope that the topic doesn’t swallow the sport to that degree.”