Viloria out to prove Nino is not in his class

MANILA, Philippines – Brian Viloria has had six years to think.

Six long years with which to play back in his mind all 24 rounds of his two bouts with Omar Nino, the man who handed him his first defeat in the summer of 2006, taking his WBC junior flyweight title in the first fight, then holding him to a draw in a rematch that was later changed to a no-decision after Nino tested positive for amphetamines in the post-fight drug test.

Now 31, Viloria has grown from the privileged former U.S. Olympian he was in 2006 to the grizzled three-time world champion who has overcome obstacles that most felt would have ended his career. And now, in seeking revenge when he faces Nino a third time at the Ynares Sports Arena in Pasig City, Philippines, on Saturday night (Sunday morning in the Philippines), Viloria hopes to overcome another.

“I really want to prove, not only to myself but to everybody else that Nino is not up to my caliber,” said WBO flyweight champion Viloria (30-3, 17 knockouts) of Waipahu, Hawaii, following a workout at the Gerry Penalosa Gym in Quezon City. “I think I beat myself in my last two fights against him. I’m going to have to bring everything that I have in my arsenal to defeat a guy like Nino. I’m just going to make good work out of him.”

The Nino bouts began a rollercoaster path in Viloria’s career that saw him lose a decision to Edgar Sosa in an attempt to regain the vacant belt, after which he regrouped and ran off a winning streak and knocked out Ulises Solis to earn the IBF junior flyweight title in one of his signature performances to date. Less than a year later, Viloria would once again be an ex-champ, losing by a 12th-round TKO to the previously unheralded Carlos Tamara. 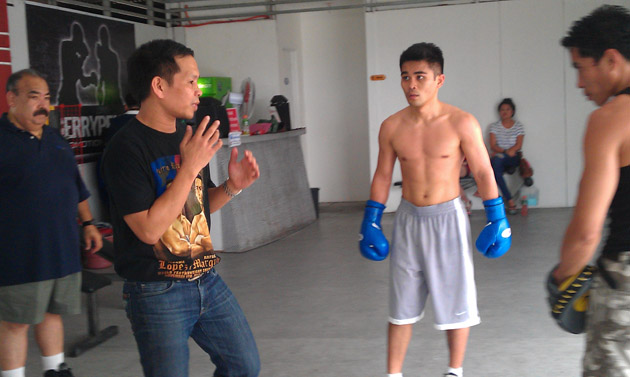 Once again, the resilient Filipino-American Viloria resurrected his career, winning a title at 112 pounds with a gutty performance against Julio Cesar Miranda, then defeating then-RING pound-for-pound candidate Giovani Segura in a career-defining performance in December to retain the title.

“At this stage of his career, every fight is very important, it’s a do-or-die fight,” said Viloria’s long-time assistant trainer Ruben Gomez. “He’s at the point where he should have stayed all the time instead of these up and downs. Every fight is very serious, and obviously this is with a personal touch.

“For this particular fight, with all due respect to Omar Nino, he was a world champion a couple of times, but I think this time he’s going to stop him and knock him out. I think you’ll see that he’s made that mental transition to, ‘Hey, I’m the champion.'”

As Viloria worked the mitts with local assistant Allan Ra├▒eses, a familiar face stepped in every once in a while to offer advice. Former two-division champion Gerry Penalosa, who has been a long-time friend of Viloria, has taken on the role of mentor as this fight approaches.

“To have Gerry, it’s great to have a legend like him, one of the greatest in the sport coming out of the Philippines,” said Viloria. “When he says something, you better be listening because there’s very few chances when a world champion like that gives you tips and tricks in the ring.”

Nino, of Guadalajara, Mexico, who is four years older at 35, has also been on a rollercoaster in his career, losing a decision to Filipino Juanito Rubillar after a year and a half layoff following the Viloria fights. Nino (31-4-2, 13 KOs) avenged that loss, then fought WBC junior flyweight titleholder Rodel Mayol in a pair of bouts that saw him knock Mayol down hard when he wasn’t looking, resulting in a technical decision, then win a close decision in the rematch.

Nino would lose the crown to Gilberto Keb Baas (who entered the bout with 20 defeats), and was out of the ring for 14 months prior to defeating trialhorse Javier Romano in March.

“I’m just going to every fight like it’s my last fight,” said Viloria. “Like this is going to ride on everything, that’s just how my mentality is now. Every fight is going to be tough, and even if a guy like Omar Nino or a guy like Segura, I’m going to bring my best foot forward. This is the same mentality that I brought into the last couple of fights with Miranda and with Segura. I trained three months for this fight and I trained every bit as hard for the Segura fight. I didn’t hold anything back for this training camp.”