The ugly side of boxing? 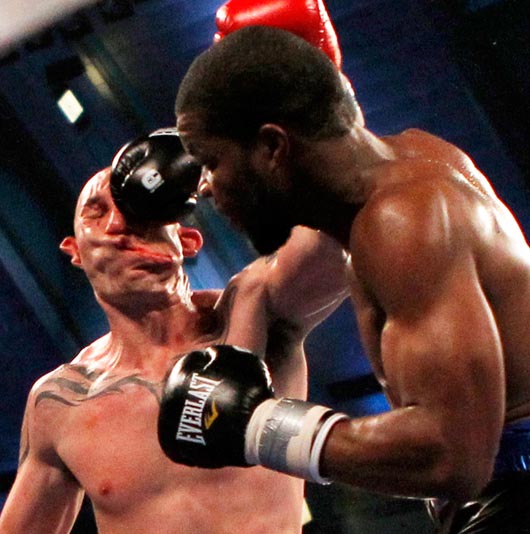 This unusual photo of Lavarn Harvell rearranging the face of Anthony Pietrantonio on the Chad Dawson-Bernard Hopkins undercard Saturday night in Atlantic City, N.J., almost seems like an optical illusion. It isn’t.

Harvell, an unbeaten prospect from Atlantic City, knocked Pietrantonio out cold with this punch in the third round of their light heavyweight fight.

Photographer Tim Shaffer, working for Reuters, was warming up for the featured fights when he happened to catch this moment for posterity.

“In any sport you’re looking to get peak action … and that represents peak action,” Shaffer told RingTV.com. “It was a heck of a punch. He was knocked out cold. They had problems getting his mouthpiece out to make sure he was breathing OK.

“They had a good crew there, though. They were on him real fast and got him moving around. He walked out under his own power.”

Shaffer, a talented photographer with a great deal of experience, said he was somewhat surprised when he first saw the image on his camera.