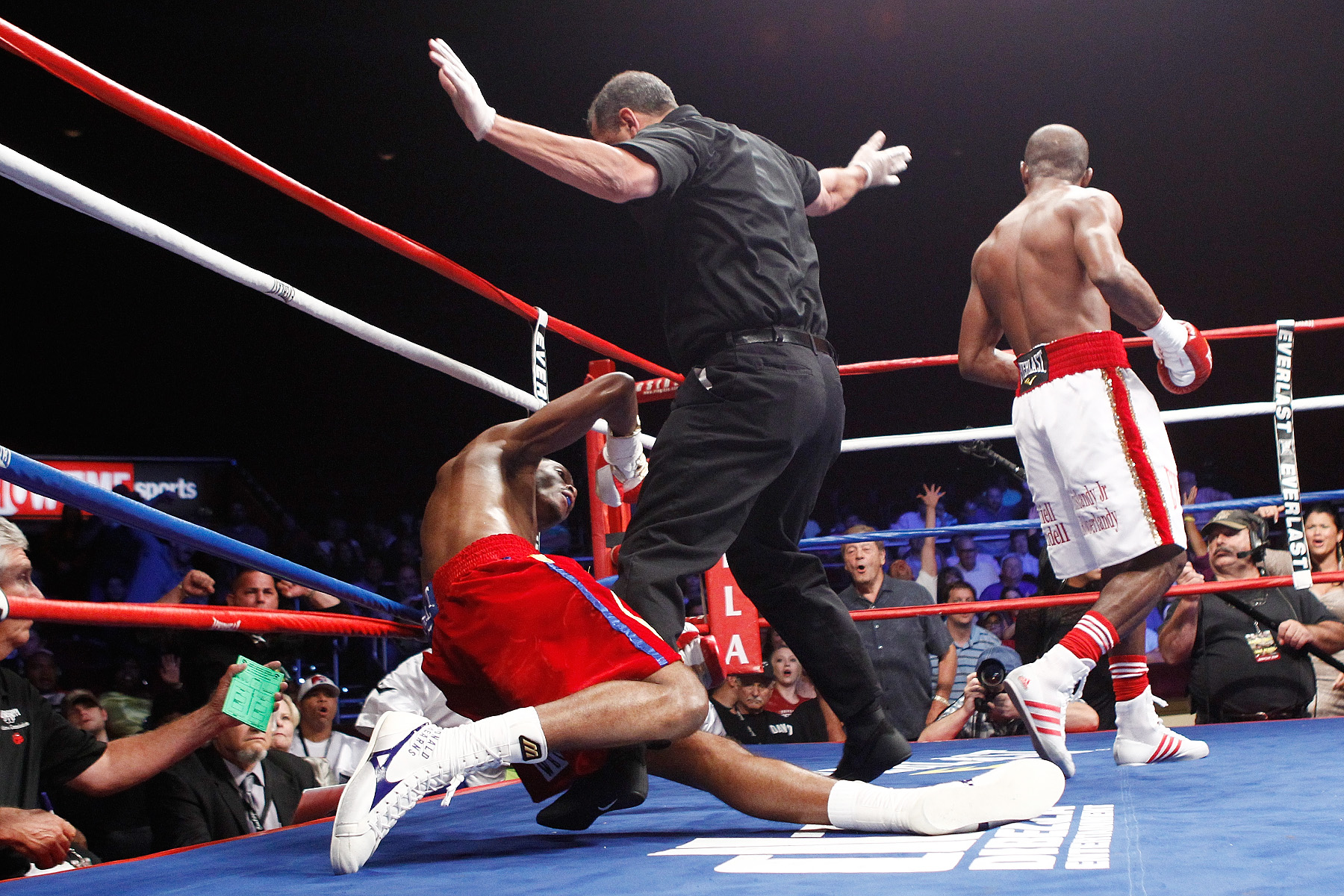 Click here to read part one of this article.

Friday, April 20: For me, this day began six-and-a-half hours after the last one ended, and I spent the vast majority of the next several hours working on a research project that will require several more weeks to complete. Once I arrived at a good stopping point I packed up my laptop and headed down to the Beau Rivage’s 1,500-seat theater with punch-counting associate Andy Kasprzak.

After setting up, we headed to The Buffet to grab a mid-afternoon meal, which for me consisted of mashed potatoes, prime rib, wild rice, two glasses of Diet Coke for the body and excellent conversation for the mind.

An hour after the doors opened to the public at 6:30, the five-bout card kicked off with a scheduled six-rounder between junior middleweights Steven Martinez (11-1, 9 KO coming in) and Marcus Thompkins (5-6-1, 2 KO coming in). The willowy Martinez, a native of the Bronx, stood several inches taller than the 5-9 Thompkins, whose upper body was markedly thicker and more developed. It took barely more than a minute before Martinez figured out Thompkins’ style and he let him know it in the form of whipping combinations. By the end of the first three minutes Martinez landed 49 of his 112 punches and 38 of his 74 power shots while Thompkins only had time to land 11 of 45 and 8 of 26 respectively.

Martinez continued to pound away in the second and Thompkins could do little more than cover up and try to ride out the storm. A right uppercut-left hook dropped Thompkins for an eight count a little before the round’s midway point, and when referee Fred Steinwinder III allowed Martinez to resume, Thompkins shook his head as if he didn’t want to continue. A few seconds later it was over, for a follow-up flurry persuaded Steinwinder that Thompkins was no longer fit to fight. Landing 63 percent of one’s power punches (22 of 35) in a little less than two minutes’ time can do that to a fighter.

Detroit middleweight J’Leon Love (10-0, 6 KO coming in) took a small step up the ladder by facing cagey southpaw Ibahiem King of West Palm Beach, Fla. (10-6, 4 KO coming in), a fighter who was familiar in the ways of survival. Love approached this puzzle with appropriate respect as he methodically picked King apart with singular power shots, mostly rights to the body. He landed an impressive 61 percent of his power punches in round one and out-worked King by a nearly two-to-one margin overall.

His measured attack set the table for the explosion that occurred early in the third. The man who had the words “Future Legend” stitched on the back of his robe fired a one-two followed by a beautifully delivered right to the cheek that sent King crashing to the canvas along the ropes. A badly dazed King could only roll onto his knees before being counted out at the 38-second mark.

The final untelevised undercard fight pitted heavyweights Kelvin Price (12-0, 6 KO coming in) of New Iberia, Louisiana and Arron Lyons of nearby Gulfport, Mississippi (12-11-1, 9 KO coming in). Each of the 10 rounds they fought closely resembled each other as the taller, more athletic Price used his legs and long, sharp punches to carve up the stockier Lyons. By the third, Price’s jabs produced knots under each eye and a cut over the left orb that bled for the remainder of the contest.

From time to time Lyons, nicknamed “King of the Jungle,” managed to land a scud that brought a roar from the hometown crowd but his successes were short-lived. The later rounds saw the action get progressively sloppier, and had Lyons been able to pick up his pace beyond the 21-punches-per-round he did throw, he might have exploited Price’s triple-time volume by tiring him out. Unfortunately for Lyons, Price still won rounds even while throttling down his pace in rounds 6-10 from 68 per round to 40 while Lyons never freed himself from his self-imposed mud bog. As a result, Price won an easy 99-91, 98-92 (twice) decision.

Erislandy Lara (15-1-1, 10 KO coming in) entered his fight with Ronald Hearns (26-2, 20 KO coming in) as the heavy favorite, and justifiably so. Although both men were coming off losses, Lara’s was more a “loss” than a loss. That’s because his majority decision defeat to Paul Williams nine months earlier was so atrocious that two of the three judges were suspended indefinitely, an almost unprecedented move. Meanwhile, Hearns’ last outing 14 months earlier was a resounding seventh-round TKO defeat to the sharp-boxing but otherwise light-hitting Felix Sturm. If Hearns’ chin couldn’t withstand Sturm’s feathers, how could it possibly hold up against Lara?

The answer: It didn’t. 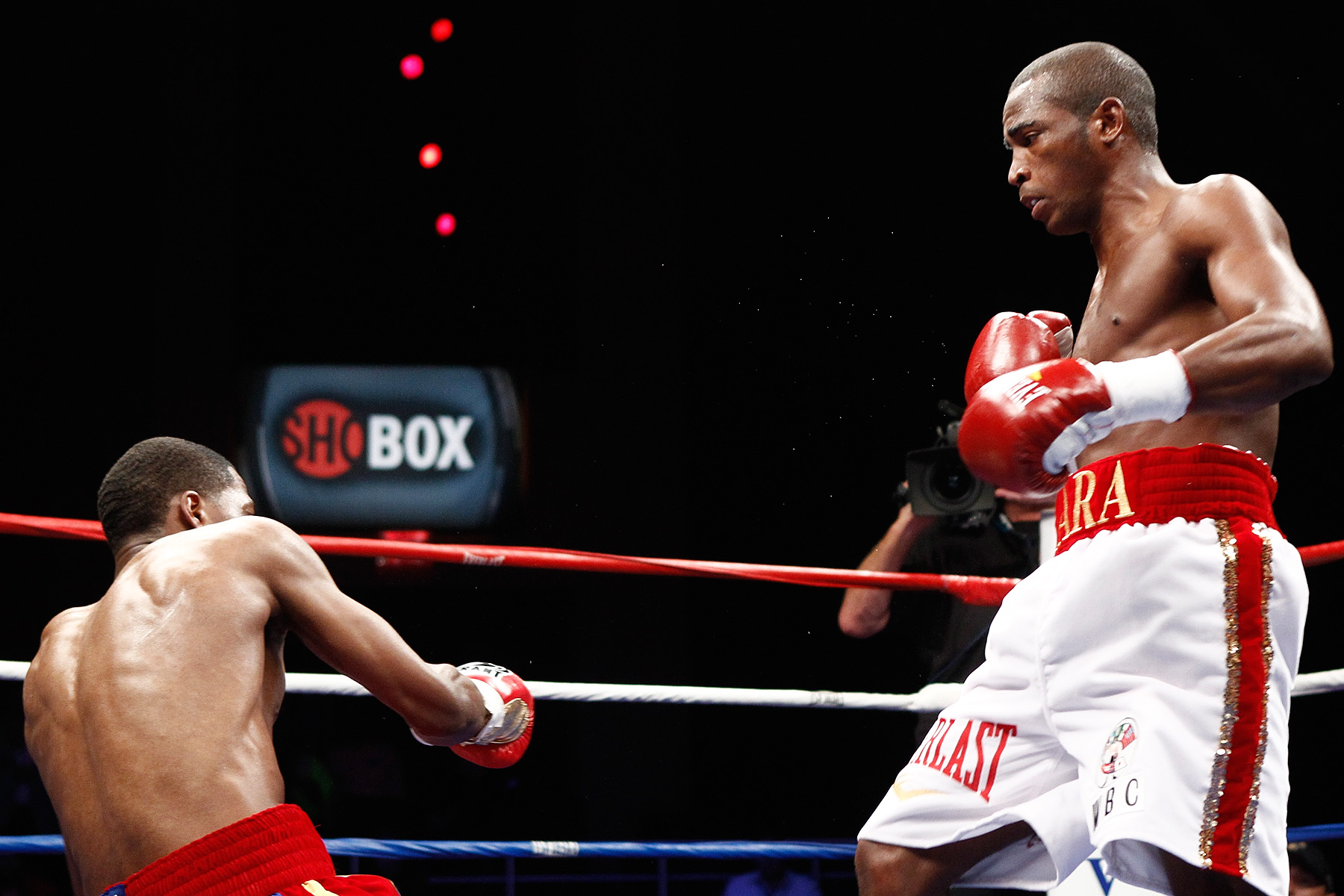 It took Lara just 94 seconds to demolish the Hall of Famer’s son, who never got a chance to fire his record-setting jab (Hearns holds the all-time CompuBox middleweight record for jabs thrown in a round with 93, which was set in round two against Sturm). Lara did what he was supposed to do against the 6-3 Hearns — cut the distance and let the left hands fly — but few expected the end to come so quickly. Once Hearns crumpled under the force of the first left cross, he was all but finished. A follow-up flurry along the ropes produced a standing eight count moments later and the fight ended with two massive blows to the jaw that left Hearns lying on the bottom rope. It was a breathtaking performance and at ringside the expressions of shock and appreciation could be heard all around.

Lara couldn’t have asked for a better preamble to his next step up the boxing ladder. For the rest of his career, the first and third knockdowns of Hearns will be staples of Lara’s highlight reel and will, at least for now, quiet the critics who cite his occasional reluctance to engage.

The main event between former undisputed middleweight champion Jermain Taylor (29-4-1, 17 KO coming in) and Caleb Truax (18-0-1, 10 KO coming in) confirmed just how powerfully habits are ingrained. The book on Taylor, at least of late, read as follows: A jab-heavy offense, a solid but not-often-thrown right cross, a tendency to fade in the late rounds and a vulnerable, reachable chin. For Truax, his dossier read extremely low punch volume (28.9 punches per round in two CompuBox-tracked fights), failure to initiate exchanges and sudden explosive displays of power (he flattened Robert Kliewer with a single hook to the jaw early in the third after two typically slow rounds).

Taylor dominated the first seven rounds with his left jab – which made up 66 percent of his total offense this night. He landed 41 percent of his power punches, but averaged a little over 16 attempts per round (nearly half the 33.1 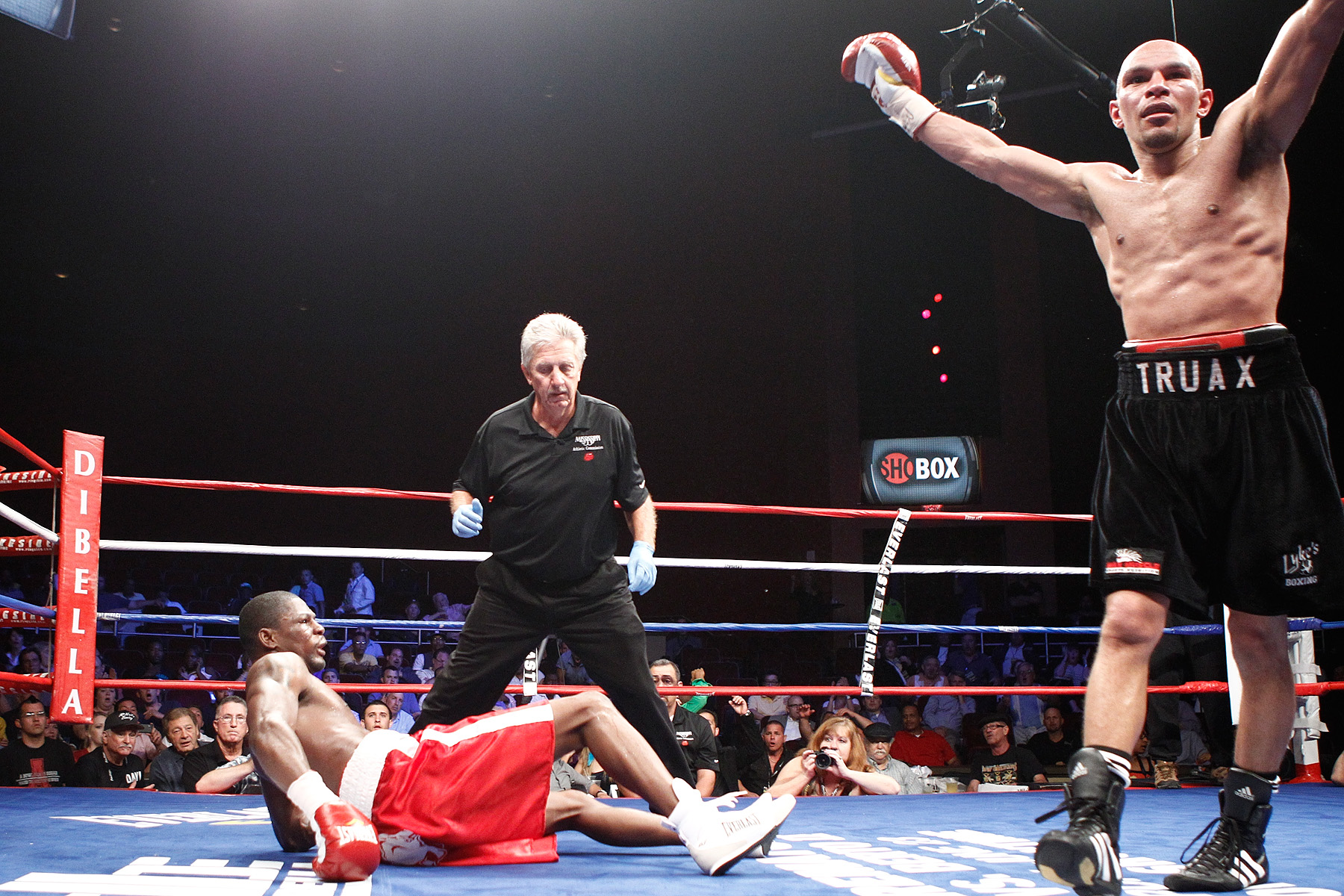 middleweight average). He appeared to tire starting in the seventh round, but when he perked up in the final minute of the eighth one had reason to believe Taylor would be OK. That all changed after Taylor tasted a single Truax right early in the ninth, turning a sure victory into an improbable melodrama.

As for Truax, he also lived up to his profile. He averaged 32.6 punches per round – not nearly enough to offset Taylor’s superior work rate (48.2 per round). He often shuffled his way into punching range instead of forcing Taylor to fight faster than he wanted. And Truax proved he had two-fisted power by flooring Taylor with the cross instead of the hook that felled Kliewer.

Most thought Taylor was off his rocker by gleefully celebrating his recuperative powers in the post-fight interview. On one level, there was reason for his joy. During each of his knockout losses to Kelly Pavlik, Carl Froch and Arthur Abraham, once Taylor was hurt he was hurt for good. Against Truax, Taylor managed to change his history. For more than two minutes Taylor showed he could find a way to survive until the bell, a pretty mean feat for a 33-year-old ex-champ with a notoriously weak chin.

Taylor’s epiphany was almost like what Thomas Hearns experienced in the final round of his rematch with Sugar Ray Leonard. Behind on points, Leonard hurt the “Hit Man” horribly with a withering series of power shots that threatened to snatch victory from almost sure defeat. As Hearns’ body waved in the wind, memories of his nightmarish sixth, seventh, 13th and 14th rounds eight years earlier flashed in everyone’s minds. But this time Hearns clutched, grabbed and held for dear life to make it to the final bell. Though he got a draw that even Leonard admitted Hearns should have won, Hearns earned a moral victory by being able to change his spots against the very man who exposed them years earlier. 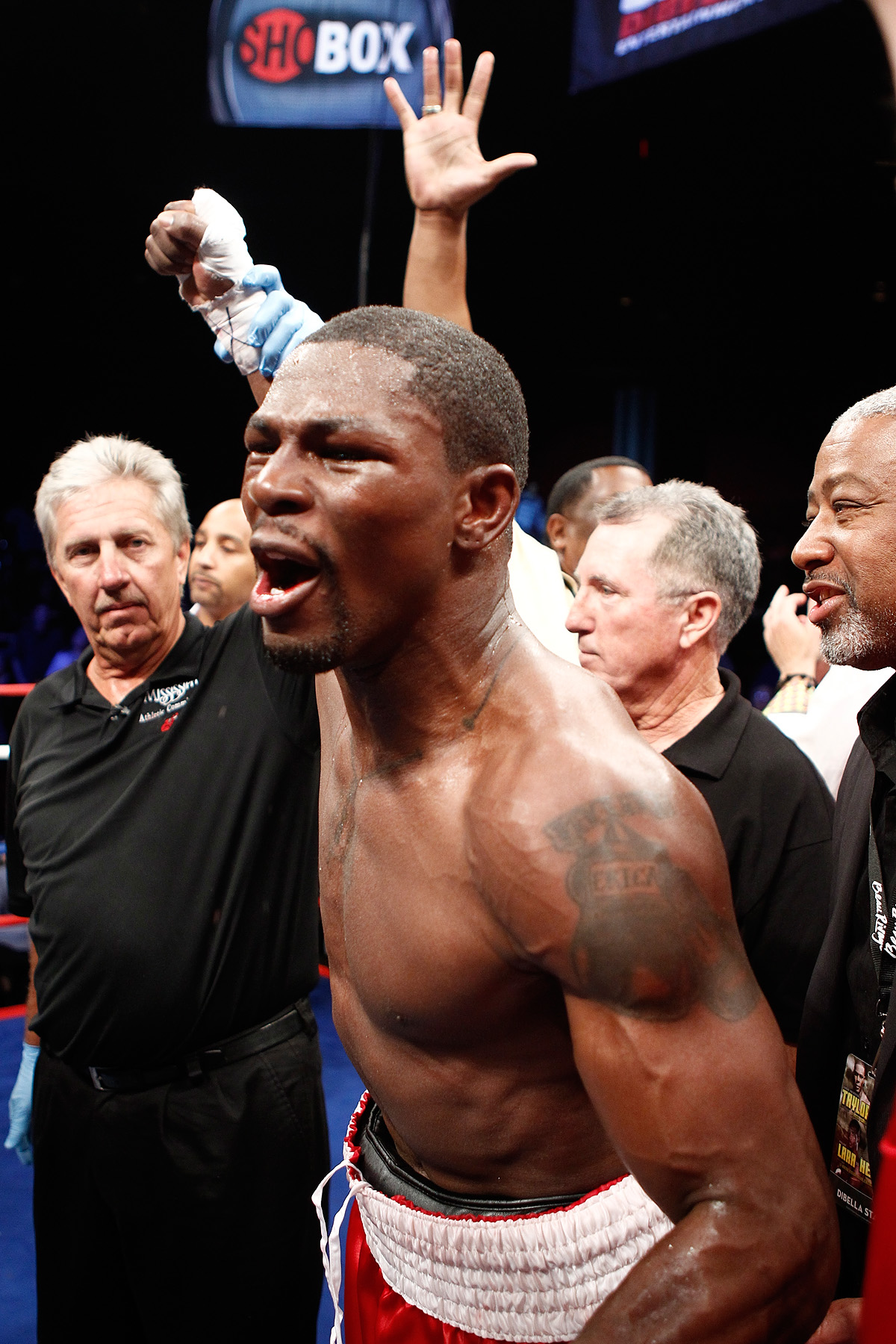 For all of Jermain’s jocularity, the hard truth is that he was hurt and decked by someone whose talent is light years away from that of Froch, Pavlik and Abraham. When Truax was chosen as an opponent, it was to highlight Taylor’s strengths rather than reprise his weaknesses. But Truax had other plans. Borrowing from one of the “Rocky” films, “Truax doesn’t know this is a damn show; he thinks it’s a damn fight.” And now he has a career highlight to sell to promoters seeking his services.

It shouldn’t have come to this for the man called “Bad Intentions” — at least not yet. If his troubles were ever to resurface, they should have done so in a big-money fight with a title on the line, not against an unknown Midwestern fighter with no significant names on his record.

Team Taylor’s next move will be determined by their level of concern over the late knockdown. On the one hand, Taylor was winning handily entering the ninth round and, as stated earlier, he had the wherewithal to work through his crisis and left the ring as a winner. On the other hand, did the knockdown raise enough red flags to persuade his people that a lateral move in competition next time out would be wiser than an upward one? Taylor is not a young 33 in terms of boxing age and time is of the essence. Perhaps the best way to bridge the gap is to schedule another fight relatively quickly against a similar-level foe to work out the kinks, then — if he emerges unscathed – seek out more lucrative game.

The variables matchmakers tackle are almost incalculable and navigating this mine field known as boxing is a daunting, stressful task. One mistake and a fighter’s life can be ruined while a series of successes means riches for everyone. No wonder most boxing matches take place in casinos, for the sport is a constant series of gambles.