A number of things need to be considered in order to adequately appreciate the tremendous statement made by Brooklyn native Paulie Malignaggi on Sunday.

He completely dominated the physically bigger, taller, harder-punching and previously unbeaten Vyacheslav Senchenko in front of Senchenko’s hometown fans at Donbass Arena in Donetsk, Ukraine, and scored a ninth-round technical knockout with a referee known for not stepping in to stop fights.

A former IBF junior welterweight beltholder in just his fourth welterweight bout, the 5-foot-8 Malignaggi (31-4, 7 knockouts) had busted the nose of the 5-10 Senchenko (32-1, 21 KOs) and battered his left eye bloody and swollen shut by the time the fight was over.

Such was the beating inflicted by the fighter nicknamed, “The Magic Man,” that referee Steve Smoger — who almost never stops fights on his own — had seen enough to come to Sencheko’s rescue.

In victory, Malignaggi earned the WBA’s 147-pound belt from Senchenko, who was making his fourth defense.

“The French judge, I understand, had me losing the fight, so I would have had to win a split-decision. So that’s definitely one judge who I think was in the bag. But this could possibly be my best performance because I was able to do this with a lot of distractions and I still maintained my focus.”

Golden Boy Promotions CEO, Richard Schaefer, was on a flight back to Los Angeles from Atlantic City, where he was ringside promoting Chad Dawson’s light heavyweight title majority-decision win that dethroned Bernard Hopkins as RING and WBC champion.

“Not only did he go to the guy’s hometown, but he dominated him and stopped him, and now he’s WBA welterweight world champion,” said Schaefer. “He’s in the hottest division in the sport. Most of the big names are fighting within that 147-pound weight class.”

“We believed in him. He’s very deserving, a lot of hard work and a lot of dedication. At this point in his career, Paulie is one of the most recognized names in the sport, and for him to go and win on hostile grounds is amazing. We believed in him, and as a matter of fact, we believed so much that he was going to win this fight that we told him that win or lose, we’re going to give him our promotional profit for this particular fight.”

Malignaggi had forecast his performance during an earlier interview with RingTV.com.

ON BEATING A FREDDIE ROACH-TRAINED FIGHTER

Trained by Freddie Roach, who also handles stars like Manny Pacquiao, Julio Cesar Chavez Jr. and Amir Khan, Senchenko, 35, has spent the majority of his career fighting at 147 pounds, even once scoring a first-round knockout while weighing 150.

Malignaggi, meanwhile, won his fourth straight welterweight bout after having campaigned most of his career at 140, and was coming off a one-sided 10-round unanimous decision over Orlando Lora last October. Malignaggi’s last loss had been in May of 2010 against Khan, who scored an 11th round knockout in defense of the WBA’s junior welterweight crown.

Malignaggi’s trainer is Eric Brown, who also works out of Roach’s Wild Card Gym in Hollywood, Calif. Roach did not make the trip to the bout as he is in Baguio, Philippines, preparing Pacquiao for a June 9 defense of his WBO welterweight crown against Tim Bradley.

Roach is also prepping Khan for a May 19 rematch with Lamont Peterson, who dethroned Khan as IBF/WBA junior welterweight beltholder by split-decision in December.

“Freddie worked with Senchenko in Los Angeles, but then he had to go to the Philippines,” said Malignaggi. “Freddie’s got a lot bigger things to worry about with Pacquiao and Khan having big fights. So he ended up not coming to the Ukraine, so that may have played a little bit on Senchenko, mentally.”

Malignaggi, nevertheless, was happy to win for Brown as well.

“At Wild Card, Eric is probably second in charge to Freddie,” said Malignaggi. “The way it goes down is that there is Freddie and then Eric. Eric’s the best trainer I’ve ever had.”

“Eric is very underrated as a trainer. Freddie’s obviously the man, but people don’t look at the other trainers in the gym some of the time. I wanted to win a title for me, but also, for Eric to show that Eric Brown is also a great trainer.”

Malignaggi, who held the IBF junior welterweight title in 2007 and 2008, had faced stiffer competition than Senchenko, having suffered career losses to Miguel Cotto by decision in 2006, and Ricky Hatton by 11th-round knockout in 2008.

Malignaggi rectified a controversial unanimous decision loss to Juan Diaz in the latter’s hometown of Houston in August of 2009 by avenging it the same way in Chicago later that year. 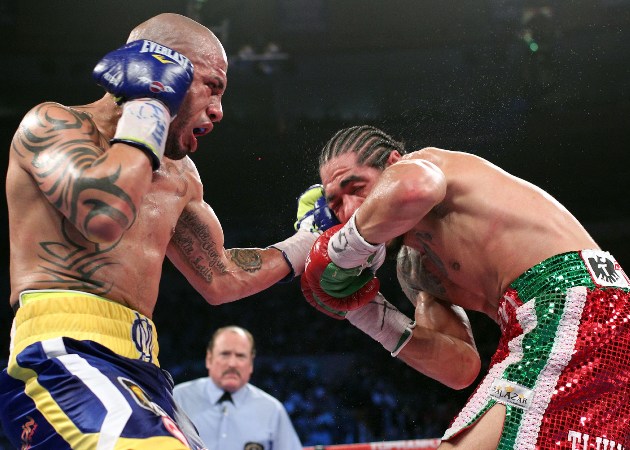 Smoger’s track record is one of allowing bouts to be contested to their violent conclusion, meaning that the fighters’ fists or their corners usually stop bouts that do not last through to the decision.

“Steve Smoger doesn’t stop fights, and I’m all for that. Me, I can’t stand it when they stop fights. I hated it when the Ricky Hatton fight got stopped,” said Malignaggi, who has partially blamed extreme weight loss for his diminished performances over his last few junior welterweight contests.

“That Amir Khan fight, that was legit. I was totally shot. So when Steve Smoger stopped that fight, you know, I wasn’t even going to complain about it. But for the most part, I’m glad when guys don’t stop fights. But I think that this fight got stopped moreso because Senchenko didn’t want to go on anymore.”