Q&A: Mares already a veteran despite his youth 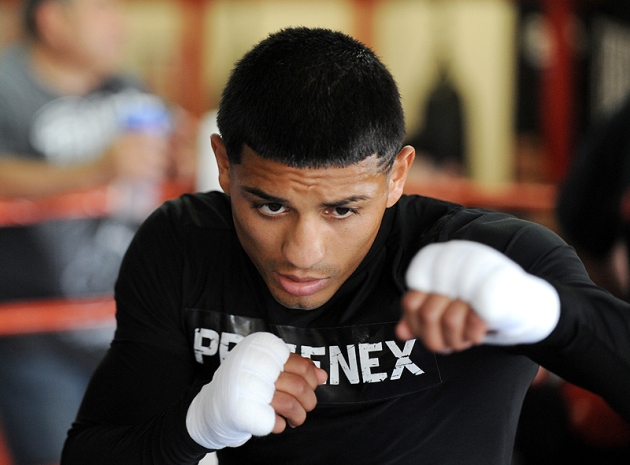 Abner Mares is just 26 years old, but THE RING’s No. 2-rated bantamweight already has the resume of a battle-tested veteran.

For more than a 20-month span through December of last year, the Mexican-born resident of Los Angeles faced elite oppponents in four, 12-round title bouts, going 3-0-1 and overcoming intense moments of adversity in the ring.

During that time, Mares twice defeated ex-beltholder Joseph Agbeko, earned a decision over former titleholder Vic Darchinyan and battled to a draw with then-beltholder Yonnhy Perez.

For his next challenge, on April 21, Mares (23-0-1, 13 knockouts) will rise in weight to face ex-titleholder Eric Morel (46-2, 23 KOs) for the WBC junior featherweight belt from the Don Haskins Convention Center in El Paso, Texas, on Showtime.

The title was recently vacated by Toshiaki Nishioka. WBC Secretary General Mauricio Sulaiman told RingTV.com last month that the decision to make Mares-Morel a title bout came after Nishioka (39-4-3, 24 KOs) cited personal issues among his reasons for not being able to immediately defend his title.

“Nishioka will be named Champion Emeritus because he is waiting and cannot defend the title right now,” said Sulaiman. “So the Mares-Morel fight will be for the WBC championship.”

Mares vacated the IBF bantamweight title in order to challenge Morel, a 36-year-old Puerto Rican-born Madison, Wis., resident and1996 Olympian. Morel has won his past 11 fights, five of them by knockout. 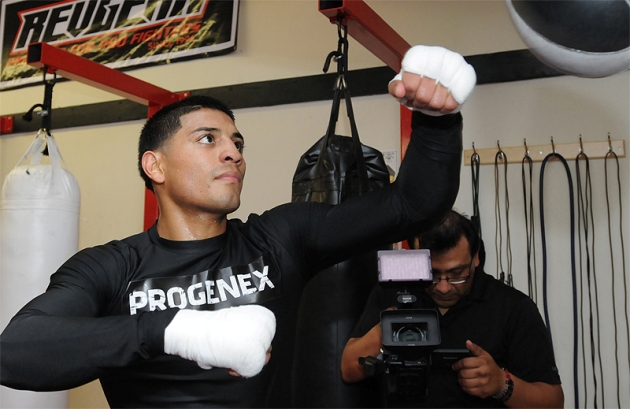 It was in May of 2010 that Mares fought to the draw with the then-unbeaten Perez in a failed attempt to earn the IBF belt before defeating Darchinyan by a split decision in December of that same year.

Mares earned the IBF title last August from Agbeko, and his only defense was a mandated return bout following the controversy over referee Russell Mora’s failure to penalize Mares for low blows in the first fight. Mares won the rematch by unanimous decision.

The Darchinyan bout featured a knockdown by each fighter, with Mares,having to endure bleeding over the left side of his forehead from a first-round clash of heads, as well as being dropped by a hard, straight left in the second round.

Mares’ face was a battered mask of crimson in the end, but he persevered to vanquish the Armenian-born southpaw Darchinyan.

In this Q&A with RingTV.com, Mares shared about his past bouts, his fight with Morel and said he gained something from having watched Nonito Donaire rise from the bantamweight ranks to vanquish ex-beltholder Wilfredo Vazquez Jr. for the WBO’s 122-pound belt in February.

RingTV.com: Morel is a crafty fighter, isn’t he?

Abner Mares: You know, he is. He is. You know what? I haven’t seen any recent tapes of him, but he’s a veteran and a good boxer as well. 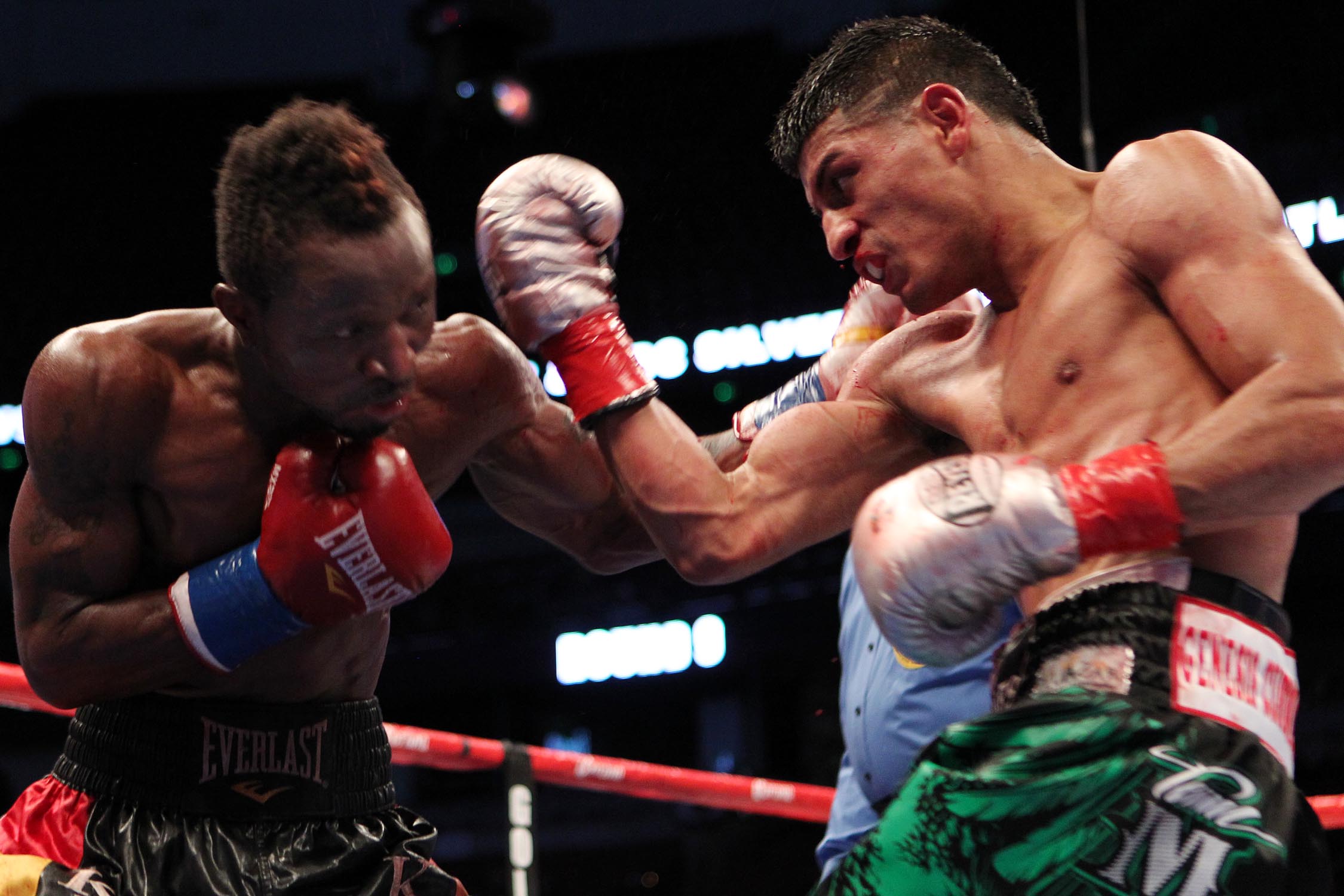 RingTV.com: Did you gain anything from having watched Donaire’s fight with Vazquez Jr.?

AM: As far as moving up in weight, it’s nothing new. A lot of people don’t know that I started out my career fighting up at 122 pounds. Obviously, the opponents are heavier and a different level of fighters.

But I have no problem with it and I don’t think that I’ll have any problems at the higher weight. I’m not looking for a one-punch knockout.

RingTV.com: Having had four, really difficult fights in a row, can you discuss how you have prospered from your experiences in those bouts?

AM: They made me a seasoned fighter, with those four fights that I have had. I just learned from all of them and I think that I grew as a fighter.

They were obviously very difficult fights, but I haven’t absorbed any permanent damage from any of them. I mean, some of the tough situations are going to happen when you’re in a tough fight.

But I was the beneficiary from all four of those fights. I just learned a lot from those fights, and I know that I have that experience now.

AM: I know the type of fighter that I am. I know how to keep my punches up. Those punches obviously happened for a reason. I was having my head pulled down in the first Agbeko fight.

But as you saw in the second fight, I came back and I beat him fair and square. The Vic Darchynian fight, you know, things happen when you’re fatigue and in the heat of battle. But again, I fought Perez to a draw.

And then I came in and beat Darchynian. Then, after that, I fought Agbeko twice in a row. I think that I went through it all and that I proved to the world that I can win through just about any situation at all. 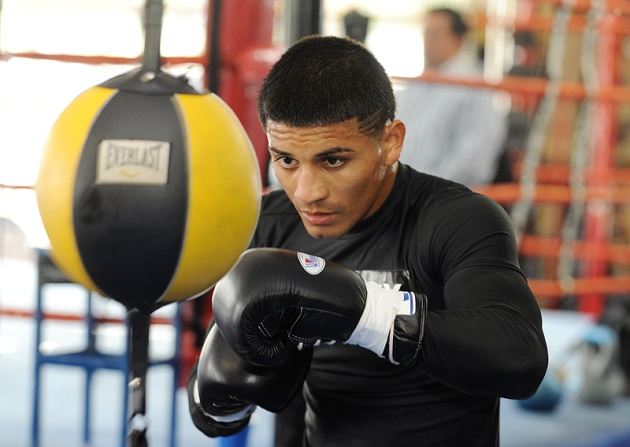 RingTV.com: What about the cuts in the Darchynian fight?

AM: Yeah, definitely. I think that I’m definitely strong-minded and determined and that mentally, I’m a focused fighter. Even against the blood.

RingTV.com: Do you feel that you’re getting the credit that you deserve as a fighter, given that guys like Donaire are in the top 10, pound-for-pound, and Adrien Broner appears to be on the verge of receiving similar attention?

AM: You know, my goal is not necessarily to be in the top 10 pound-for-pound, because at the end of the day, it’s just a list, you know?

But everybody knows that in my past four fights, I’ve been in against top fighters and they’re ranked and they’re nothing but the best.

And the guy that you just mentioned, you know, Broner, I think that the only decent fighter that he has fought is [Daniel] Ponce de Leon. And Ponce de Leon, to me, beat him.

But at the end of the day, I do all of my talking in the ring, and I hope that people recognized that, you know? I just go in there and think about the fans and think about doing my best and giving them a great fight.