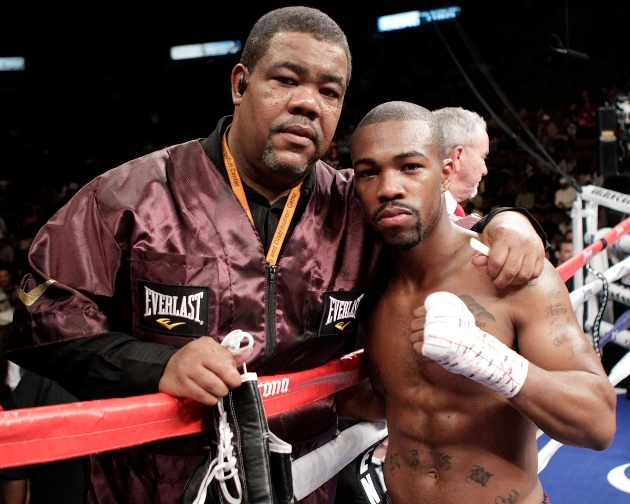 Unbeaten southpaw featherweight Gary Russell Jr. suffered an injury to his left ankle during the 12th round of a Friday sparring session that will force him off a Showtime-televised, April 21 card, his father, Gary Russell Sr., told RingTV.com on Tuesday night.

Russell Jr. (19-0, 11 knockouts) was to be part of a Showtime-televised triple-header slated for the Don Haskins Convention Center, El Paso, Texas.

The other clash has WBA bantamweight titleholder Anselmo Moreno defending against David Lamora.

“It happened on Friday. We did 11 rounds, and in the 12th round, his ankle turned over and that was a wrap. That’s the reality. That’s what actually happened,” said Gary Russell Sr., referring to an incident that occurred at their facility in the fighter’s native Capitol Heights, Md.

“We went to the hospital and got it checked out, and the doctors said that he would need three weeks to heal. He hurt his ankle to the point where he can’t push off,” said Gary Russell Jr. “He’s actually walking on it, but he can’t do any sparring or jumping around or anything like that. So we’re looking at May before he can return to training.”

A 23-year-old southpaw, Russell is coming off November’s first-round stoppage of Mexican Heriberto Ruiz and was looking to maintain that momentum against Vietnam native Dat Nguyen (17-2, 6 KOs), who had actually pulled out of the bout citing “managerial problems,” according to Eric Gomez, matchmaker for Golden Boy Promotions.

The ankle injury is the most recent setback for Russell Jr., who had been set to return to the ring for the first time since the win over Ruiz on Feb. 11 at the MGM Grand in Las Vegas. But that Showtime-televised card was scrapped — as was the welterweight rematch between Victor Ortiz and Andre Berto — when Berto suffered a biceps injury.

Brittle hands had been a problem for Russell up until the Ruiz fight.

Gary Russell Sr. said that he and his son gained solace after having attended an Easter Sunday church service, where the topic advised patience.

“The message was that setbacks are sometimes meant to set you up,” said Gary Russell Sr. “They didn’t even know about Gary’s injury, so we basically took that as a positive message. it is what it is. We’ll just pray and move forward.”