Broner-Perez could steal the Boxing After Dark show 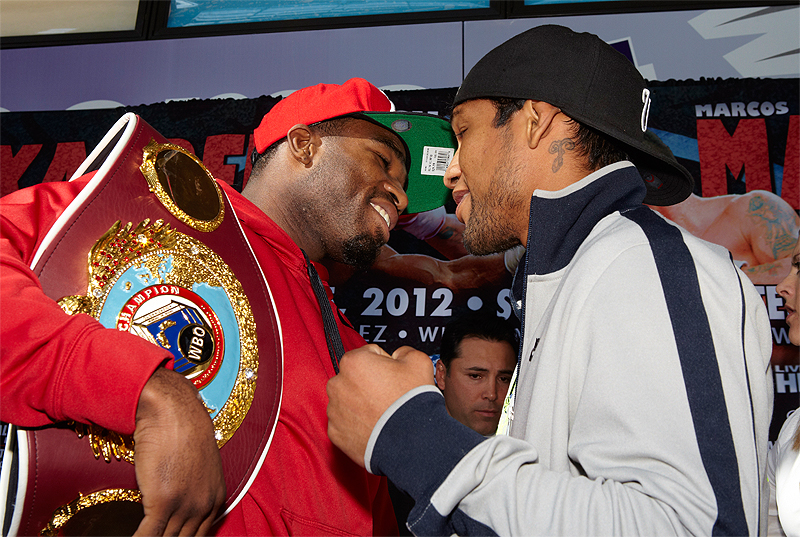 The animosity between Devon Alexander and Marcos Maidana was intensified last week when Maidana’s manager requested the Missouri boxing commission to administer a drug test before and after their HBO-televised welterweight bout on Saturday in St. Louis.

Adrien Broner and Eloy Perez don’t need any extra incentive to dislike each other or to win their Boxing After Dark co-feature. The two junior lightweights’ contrasting personalities, unbeaten records and the WBO title held by Broner is all the motivation they need.

Still, “testing” is a key story line to their fight. The young standouts figure to test each other in ways their previous opponents could not. The result could make for a better-than-expected opening bout to the broadcast from the Scottrade Center.

Robert Diaz says the two junior lightweights, whose heated words during the final press conference on Thursday upstaged Alexander and Maidana, might also outshine the main event on Saturday.

“I think this fight could steal the show,” said Diaz, matchmaker for Golden Boy Promotions, which is putting on the card. “We’re talking about two young, hungry fighters who don’t like each other. Adrien keeps calling Eloy names, like fat boy, and Eloy is starting to talk back to him as we saw at the press conference. I expect it to be a very heated, competitive fight.”

Diaz’s opinion of the matchup wasn’t shared by many when the bout was first made. Broner (22-0, 18 knockouts), who looked explosive dispatching Jason Litzau and Martin Rodriguez on HBO last year, opened as a 10-to-1 favorite.

The gifted 22-year-old boxer-puncher, who won the vacant WBO belt with a third-round KO of Rodriguez last November, appears to have clear advantages in size, speed and power.

The brash Cincinnati native believes his charisma is another attribute that Perez lacks. 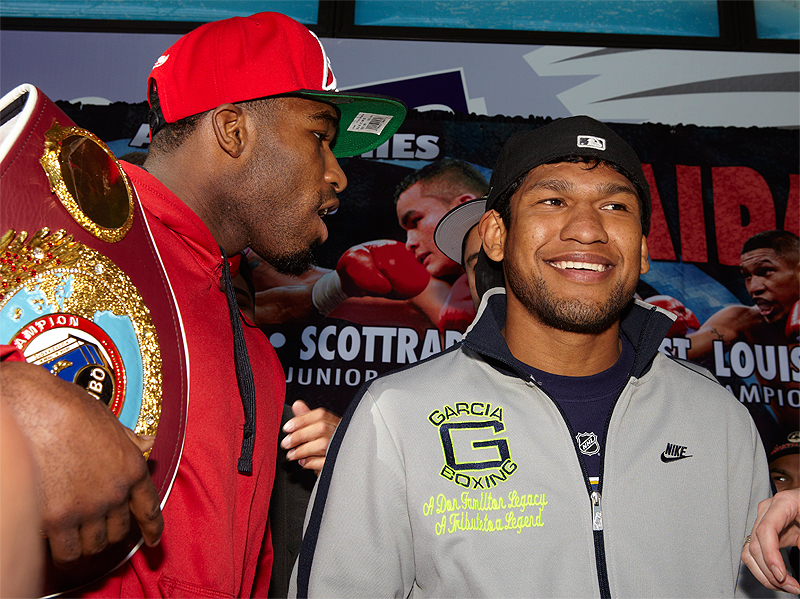 “Swag class will be in session on Saturday,” said Broner, who believes his bombastic persona compliments his considerable athletic ability. “I’m gonna beat him so bad, somebody’s gonna get fired for making this fight.”

However,  although Perez (23-0-2, 7 KOs) is a relative unknown, it appears that late money has been put on the 25-year-old challenger from Salinas, Calif., who is coming off back-to-back stoppage victories, including an impressive second-round knockout of Daniel Jimenez last September.

“I’m not known as a puncher, but my body is getting stronger,” said Perez, an aggressive counter puncher from a small town in Washington. “Training with (140-pound prospect) Mike Dallas before the Jimenez fight and this one has brought the best out of me. That title is mine. I feel it.”

Others must be feeling it, too. Odds on the fight have dropped to 3-to-1 in recent weeks. Perhaps those betting fans have done some research.

Broner’s decided edge in power still makes him a favorite among boxing writers, but his 18 knockouts, which include 10 first-round stoppages, suggests that the boxing prodigy lacks quality rounds.

Broner’s four distance fights include back-to-back six-round bouts against journeymen (Luis Alfredo Lugo and Eric Ricker in early 2009). His other two distance bouts were close decisions against better opposition – an eight-round majority nod over then-unbeaten Fernando Quintero in ’09 and an HBO-televised 10-round bout against former 122-pound titleholder Daniel Ponce de Leon last March  – that some fans thought he lost.

Perez, whose recent televised bouts have been on Spanish-language network, TeleFutura, has the meatier resume.

He has gone the eight-round distance four times, including a shutout of capable veteran Roger Gonzalez last February, and he’s fought in six 10-round bouts, including a thrilling unanimous decision over then-undefeated puncher Dannie Williams, a slugfest with rugged David Rodela, and a majority nod over mobile stylist Dominic Salcido.

Diaz, who helped bring Perez to Golden Boy after making the Rodela fight (last January), says Perez is more experienced than his 25 bouts would indicate because of the variety of styles he’s faced.

“Tough matchups is the way I like to develop fighters,” Diaz said. “I like it when the fighter’s team is like Eloy’s and not afraid to take on difficult fights, because that’s how a fighter grows.

“Against Salcido, I wanted to see how good he does with a guy who is fast and who can move. I knew Perez could box well against aggressive fighters, but I wanted to see how well he cornered a mover. I expected a better fight, but they both waited to counter too much. 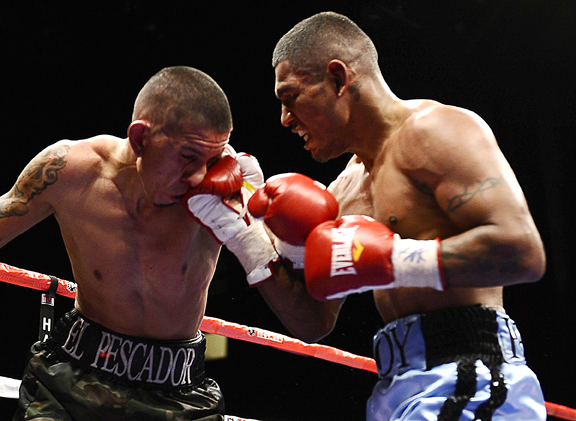 “Against Rodela (on the undercard of the Gabriel Campillo-Beibut Shumenov rematch), he looked much better. He took it to David. That was a good fight because Eloy pressed it. I think of him as a pressure fighter, but he uses smart pressure.

“Then I put him in with Gilberto Sanchez Leon (on the undercard of the Floyd Mayweather-Shane Mosley PPV show), and he didn’t look good. Leon is a tall, awkward boxer, and Eloy fought with some kind of ear injury and infection.

“But these fights showed me what he’s about. He gets through difficult situations.”

Broner is unfazed by his opponent’s pro seasoning and resolve.

“Experience only goes so far,” Broner said. “Talent overcomes everything. Talent and being in top shape beats experience.

“But it’s not like I don’t have experience. I been in the game a long time. I started boxing when I was six. I seen a lot of Eloy Perezes. He hasn’t seen anything like me.”

Perez says he has seen his share of talent. Williams, who he fought in September of 2009, has scary talent, he said.

“Williams could really punch,” Perez said. “I remember catching his jab with my right glove in the first round, and it felt like I was catching a brick. It scared me. I was scared s__tless for a few minutes.

“But the danger motivated me. It made me more aware and on my toes.”

Perez scored a hard knockdown in the second round of the non-televised bout that took place at the Playboy Mansion in Beverly Hills, Calif., when he connected with a one-two combination followed by a left hook.

“He froze and fell face first,” Perez said. “I remember stepping back to let him fall. The referee (Jon Schorle) was watching him close when he got up, but to his credit he clipped me with a right hand that put me down before the round was over. I was pissed. I got up and the fight was on.”

The two reportedly went at it like pittbulls for the rest of the round and during much of the third, which put Perez in the danger zone. Williams caught Perez again in the third when he feinted and backed up with his hands down. However, Perez got up clear headed, and having survived Williams’ best punches, he boxed with more confidence from that point on.

Perez’s co-trainers Max and Sam Garcia and Dean Familton claim their fighter punished Williams down the stretch of the fight that Schorle says is one of the best he’s ever refereed.

“Dannie and his team talked a lot of mess before the fight,” Perez said, “but he gave me my props after. I remember he kept saying ‘I didn’t know you were that strong, Eloy.’

“They didn’t think I had a chance for some reason. Maybe it’s because of my size. I’m short for this division so a lot of boxers underestimate me. That’s to my advantage because they’re lax on me.”

Broner says he’s definitely not going to be “lax on” on Perez, even if he looks relaxed during the fight.

He says his laid back approach to fights is just part of his growing maturity in the ring.

“I’ve found myself,” said Broner, who turned pro at 18. “I always had a pro style, even in the amateurs, but I was throwing so many punches. I needed to calm down and get more settled.

“I think after my ninth or 10thfight, I figured out that I didn’t need to do all of that. I was knocking guys out from an accumulation of punches, but I learned that I could do it with one or two punches.”

Perez says that won’t be enough against him.

“He doesn’t do much,” Perez said of Broner. “He waits for those two shots. He’s got the speed and skill to win like that against the guys he’s been fighting because he’s been a lot faster. He won’t be that much faster than me. And I can wait, too. I’ll be patient.

“It could come down to who can handle the boos.”

It would be a shame if such a good matchup on paper, especially after all of the verbal back-and-forth between the fighters’ camps in recent days, turned out to be a stinker.

Diaz doesn’t believe it will.

“I expect a tactical fight at the beginning, because deep down I think they respect each other,” he said. “Adrien, as we know, is lighting fast and a very confident fighter. I’m sure he thinks he can take Perez out early, but when he sees that Eloy won’t go away, he’ll settle down and put his punches together. The fight will get interesting when Perez starts to apply smart pressure to him.

“Everyone knows how talented Adrien is, and I’m sure he’ll show it on Saturday, but a lot of people are going to be surprised at how good and ready for this fight Eloy is. Perez might want it more because he worked harder to get to this point. When you have a talented boxer against a good fighter who really wants it, that’s when you get a good fight.”