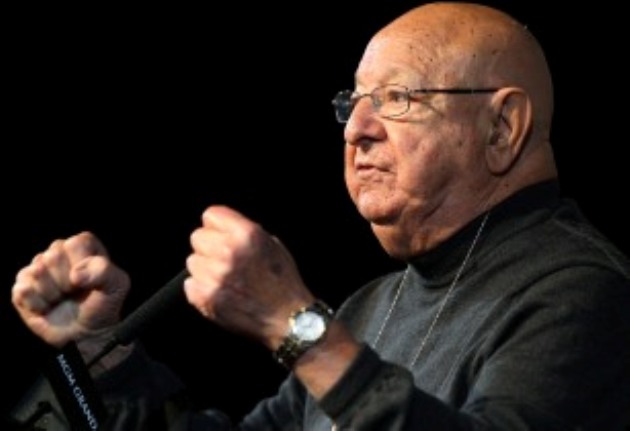 Hall of Famer Angelo Dundee was as passionate about family and fun as he was about training fighters.

Dundee spent his 90th and final birthday on Aug. 30 near his home in Palm Habor, Fla., where he dined with, among others, grandson Ryan and son Jimmy, whose birthdays were on Aug. 24 and 27.

“You can just start calling me Hop-A-Long Cassidy,” said Dundee, vowing that the hip-replacement surgery he had last January would not slow him down. “But I’m a grandfather of six and great grandfather of one, who is named Riley. We always have a good time when we’re together.”

That was also the day that Dundee took a stab at two predictions during an interview with RingTV.com, choosing Victor Ortiz to upset Floyd Mayweather Jr. in September, and Juan Manuel Marquez to defeat Manny Pacquiao in November.

“I’m warning you: I’m the worst fight picker that you will ever meet,” said Dundee, who wound up being wrong on both counts. “I’m a great analyst, but I’m the worst picker. Now, I ain’t crazy. I’m just Angelo Dundee, and I’m a just really bad fight picker.”

Maybe so, but in death, Dundee will go down as one the greatest boxing trainers who ever lived.

“It was the way he wanted to go,” Jimmy Dundee told the Associated Press about his father, who was able to attend Ali’s 70th birthday bash in Louisville, Ky., last month. “He did everything he wanted to do.”

Jimmy Dundee said his father was hospitalized for a blood clot last week and was briefly in a rehabilitation facility before returning to his apartment, where he passed.

“He was coming along good yesterday and then he started to have breathing problems,” said Jimmy Dundee. “My wife was with him at the time, thank God, and called and said he can’t breathe. We all got over there. All the grandkids were there. He didn’t want to go slowly.”

In December of 2010, Dundee’s wife, Helen Dundee, passed following a long series of illnesses at the Sun Coast Hospice in Palm Harbor, Fla., near their home in Clearwater.

Top Rank Inc. CEO, Bob Arum, had hoped to bring Dundee to Las Vegas for a Feb. 18 charity event headlined by Ali., according to the AP.

“He was really a great guy. He was a big part of my life like everybody around Ali for all those years. He was a remarkable guy,” said Arum. “He had a spirit about him and an ability to communicate that was unparalleled. I don’t know any rational person who had a bad thing to say about him.”

Arum credited Dundee with persuading Ali to continue in his third fight against Joe Frazier when Frazier was coming on strong during the middle-to-late rounds of the “Thrilla in Manilla.” Without Dundee, said Arum, Ali may not have had the strength to come back and stop Frazier after the 14th round in what became an iconic fight.

Dundee also worked the corner for Leonard, famously shouting “You’re blowing it son, you’re blowing it!” when Leonard fell behind in his 1981 clash with Tommy HearnsÔÇöa fight Leonard would rally to win by 14th-round knockout.

Dundee was also in the corner of Foreman when the 45-year-old knocked out Michael Moorer in the 10th round on November 5, 1994, to become what at the time was the eldest man to win a heavyweight crown.

“Who do you think George called when he was making his comeback? Angelo was one of those iconic figures of the sport because he was identified with training,” said Arum. “Ali was the biggest figure in the sport for the last 100 years, the most recognizable man in the world, and the guy next to him was Angelo Dundee.”

Ali and Dundee traveled around the world for fights to such obscure places as Zaire, where Ali regained the heavyweight championship against Foreman in the legendary “Rumble in teh Jungle” in October of 1974, and the unforgettable rubbermatch with against Frazier in the Philippines.

“Dundee was a giant of a man. A real history maker. We could always have an exchange of ideas. He stood up inspite of and not because of,” said Don King, who promoted Ali-Foreman. “A couple of months ago I saw him at the Hall of Fame [in Canastota, N.Y., last June.] He had had a hip replacement. But he was doing fine.”
Dundee helped Ali claim the heavyweight title for the first time on Feb. 25, 1964, when Sonny Liston quit on his stool after the sixth round during their fight in Miami Beach.

In an age when fighter-manager relationships rarely last, Dundee and Ali would never split.

Even when Cassius Clay angered white America by joining the Nation of Islam and changing his name to Muhammad Ali, Dundee never wavered. When Ali defied the draft at the height of the Vietnam war, losing nearly four years from the prime of his career, Dundee was there waiting for the heavyweight’s return.

Ali would make bold predictions, spewing poetry that made headlines across the world and earned him the nickname “The Louisville Lip,” but Dundee never asked him to keep quiet.

“Through all those days of controversy, and the many that followed, Angelo never got involved,” Ali wrote in the foreword to Dundee’s autobiography, My View From the Corner: A Life in Boxing. “He let me be exactly who I wanted to be, and he was loyal. That is the reason I love Angelo.”

King agreed.
“I just remember him as a man who there during the [Civil Rights] struggle. He was what made America better.
The remarkable thing about Angelo was that he could get along with anybody,” said King. “He personafied walking in another man’s shoes. He was the type of person that you could identify with and related to. He was a beautiful man. I loved the man. He was a great contributor to the American way.”
With Dundee’s death, a part of boxing died, too.
The Associated Press contributed to this report
Photo / Fightwireimages.com
Lem Satterfield can be reached at [email protected]