Mayweather to Pacquiao: “Step up punk.” 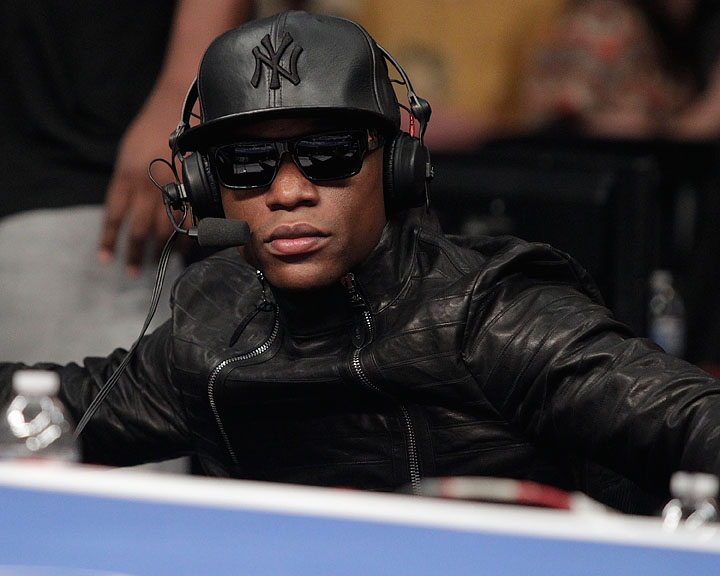 Floyd Mayweather Jr. has called out Manny Pacquiao on his personal Twitter account, a statement which ends in a Tuesday tweet with three words: “Step up punk.”

The transmission was verified by RingTV.com’s Michael Coppinger to have come from the official account of Mayweather during a week when each of the fighters are expected to announce that they will fight separate opponents if a bout cannot be made between the two of them.

Having avoided jail time until June 1, it seemed a forgone conclusion that Mayweather would be re-injected into the mix of choices that were presented to Pacquiao by his promoter, Top Rank Inc. CEO, Bob Arum, and his advisor, Michael Koncz, on Monday evening [Tuesday Pacquiao’s native Philippines.]

Mayweather had been facing a 90-day jail sentence, stemming from a 2010 domestic violence case, that was slated to begin on Jan. 6, a scenario which threatened his announced plan to return to the ring on May 5 at the MGM Grand in Las Vegas, with Pacquiao as the assumed target.

Even with the new development, however, it remained unclear whether or not Mayweather was truly considered as seriously as the four other possibilities for Pacquiao: comprised of WBA junior middleweight beltholder Miguel Cotto, WBA/WBO lightweight titleholder Juan Manuel Marquez, IBF/WBA junior welterweight beltholder Lamont Peterson or Peterson’s WBO division counterpart Tim Bradley.

Apparently, having sensed the urgency, Mayweather went on the attack.

“Manny Pacquiao I’m calling you out. Let’s fight May 5th and give the world what they want to see,” wrote Mayweather, the WBC’s welterweight beltholder. “My jail sentence was pushed back because the date was locked in. Step up punk.”

On Monday, Pacquiao, the WBO welterweight titleholder, was quoted on the website Philboxing.com as saying that he would push for Arum and Koncz to make a mega bout with Mayweather, although he would likely yield to their final suggestion.

Pacquiao’s interview transpired as part of a long distance telephone conversation with a Filipino writer that was spoken in Pacquiao’s native Tagalog.

“I don’t [choose] the fight. It is my promoter who does, because it’s his job,” said Pacquiao. “My job is to fight, everybody must realize that.”

But in a story that appeared in The Grand Rapids Press entitled “If Manny Pacquiao doesn’t demand Floyd Mayweather fight, we’ll know he doesn’t want it,” writer David Mayo implies that Pacquiao is hiding behind Arum.

“I think that at this point, that puts the requirement onto Pacquiao to step forward and to take control of his own business,” said Mayo. “Or else, boxing fans are going to be deprived of the biggest fight of this era or of many people’s lifetimes.”

Pacquiao insists that he does want to face Mayweather.

“I’ve said this over and over before and I’m saying this again: I want Floyd Mayweather Jr. to be my next opponent, and I haven’t changed my choice despite recent developments. I am meeting with my promoter, Bob Arum, on Tuesday and I will insist that the fight with Mayweather be given the preference than the four others in the list I will fight next,” said Pacquiao.

“Whoever the fans want me to fight, I will face him atop the ring…Whoever says I’m ducking this fighter or that fighter, doesn’t know me, or just plainly wants to put me in bad light. I never dodged from fighting anybody. If I did, I won’t be where I am now.”

In the absence of a Pacquiao fight, Golden Boy Pronotions CEO Richard Schaefer has suggested that he is close to reaching a deal for Mayweather to fight on the target date against another opponent, with the potential alternatives being RING No. 2-rated lightweight Robert Guerrero, a five-belt winner over the course of three divisions, and RING No. 2-ranked junior middleweight Saul “Canelo” Alvarez, holder of his division’s WBC crown.

Leonard Ellerbe, CEO of Mayweather Promotions, told Kevin Iole of Yahoo!Sports that Mayweather’s next opponent should be announced “sometime later this week, toward the end of the week.”

In a story posted on Wednesday morning [Tuesday in the United States] — prior to his meeting with Pacquiao — Koncz told The Manila Standard that Pacquiao’s top priority was Mayweather.

“Manny has told me his priority for his next fight is Mayweather. We are working on it and trying to make that fight. I can assure you it’s nothing from our side or the Top Rank side that’s hindering this,” said Koncz.

“There will be discussions on Floyd because if that fight is not going to take place now we are certainly hoping it will take place later in the year.”

Mayo doesn’t buy it, and believes that Pacquiao should insist that the fight happen sooner rather than later.

“I think that it’s time for Pacquiao to force the fight to be made. This has gone on for 25 months, and they’ve both waffled at different points, but, now, Mayweather wants the fight. Mayweather has reached out verbally and said that he wants to make the fight,” said Mayo.

“Leonard Ellerbe, Floyd’s spokesman and mouthpiece, has said that they want the fight. Richard Schaefer, who has promoted Floyd for five years, wants the fight. So now, it’s all up to Manny. There’s only one person who can make Arum change his mind, and that’s the guy who Arum has the responsibility to. And that’s Manny Pacquiao.”