Is it up to Pacquiao to demand a fight with Mayweather? 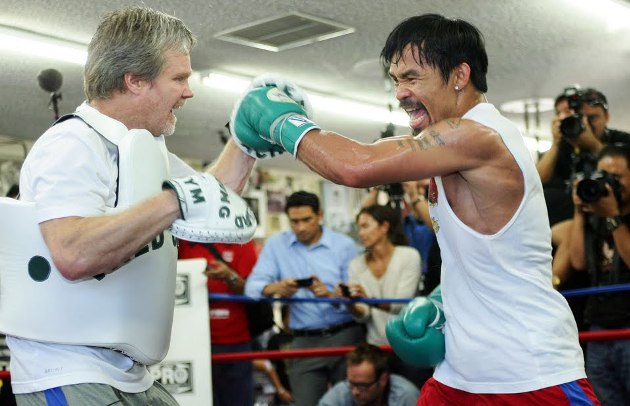 If Manny Pacquiao really wants to fight Floyd Mayweather Jr., then why doesn’t he just come right out and say so?

Well, if you believe the quotes attributed to Pacquiao in a recent story that appears on the website Philboxing.com, the WBO welterweight beltholder truly does want to unify titles against WBC counterpart Mayweather in a megabucks bout.

“I’ve said this over and over before and I’m saying this again: I want Floyd Mayweather Jr. to be my next opponent, and I haven’t changed my choice despite recent developments,” states Pacquiao in the story.

“I am meeting with my promoter, Bob Arum, on Tuesday and I will insist that the fight with Mayweather be given the preference than the four others in the list I will fight next.”

Pacquiao’s statements, according to Philboxing.com’s report, were told the writer in Tagalog during a long distance telephone conversation from his native General Santos City.

Within the same story, Pacquiao states, “I don’t [choose] the fight,” adding, “It is my promoter who does, because it’s his job. My job is to fight, everybody must realize that.”

“Whoever the fans want me to fight, I will face him atop the ring,” states Pacquiao. “Whoever says I’m ducking this fighter or that fighter, doesn’t know me, or just plainly wants to put me in bad light. I never dodged from fighting anybody. If I did, I won’t be where I am now.”

That perceived waffling has lead to doubt and speculation from others such as David Mayo of The Grand Rapids Press. In an arctle entitled “If Manny Pacquiao doesn’t demand Floyd Mayweather fight, we’ll know he doesn’t want it,” Mayo implies that Pacquiao is hiding behind Arum, CEO of Top Rank Inc.

“Today, it is Pacquiao’s failure to take control of his own career, and to tell Arum, his promoter, what’s in his heart — if, in fact, the desire for a Mayweather fight burns there,” writes Mayo.

“Arum planned to fly to The Philippines today to present four potential opponents to Pacquiao, none of them Mayweather. The first word out of Pacquiao’s mouth should be, ‘Why?'”

Having avoided jail time until June 1, it seemed a forgone conclusion that Mayweather would be re-injected into the mix of the choices that will be presented to Pacquiao by Arum and his advisor, Michael Koncz, on or before Jan. 10 in his native Philippines.

Mayweather had been facing a 90-day jail sentence, stemming from a 2010 domestic violence case, that was slated to begin this past Friday, a scenario which threatened his announced plan to return to the ring on May 5 at the MGM Grand in Las Vegas, with Pacquiao as the assumed target.

But Golden Boy Promotions CEO Richard Schaefer, who has handled Mayweather’s most recent fights, doubts that Arum wants to match Pacquiao against Mayweather.

“Once it became apparent that Bob Arum is not interested in a Mayweather fight — and he can say whatever he wants to say — but I do hope that fight fans and the media are starting to realize that he never had any intentions to get that fight done. There are many reasons why,” Shaefer told RingTV.com.

Schaefer has even suggested that he is close to reaching a deal for Mayweather to fight on the target date against another opponent, with the potential alternatives being RING No. 2-rated lightweight Robert Guerrero, a five-belt winner over the course of three divisions, and RING No. 2-ranked junior middleweight Saul “Canelo” Alvarez, holder of his division’s WBC crown.

Leonard Ellerbe, CEO of Mayweather Promotions, told  Kevin Iole of Yahoo!Sports that Mayweather’s next opponent should be announced “sometime later this week, toward the end of the week.”

In Iole’s story entitled “Mayweather-Pacquiao all but dead for now,” Arum said that Mayweather was still in the mix.

But the 80-year-old promoter cast doubt on the clash happening on Mayweather’s targeted return date. Arum asserts that Pacquiao won’t be cleared to spar until April 1 due to a cut he sustained in his majority decision over Marquez in November.

“There is no magic to the May 5 date. I understand there is magic to May, because [Mayweather] has to go to the hoosegow on June 1,” Arum told Iole. “I get that, but the magic is in [making the fight in] May, not necessarily on May 5.”

If the Mayweather bout doesnt’ happen, Pacquiao doesn’t want to be blamed, according to Philboxing.com.

“It’s not really fair for some quarters to blame me if, in the long run, the fight wouldn’t push through,” said Pacquiao. “As I have also been saying many times before, I fight for the fans. I want the fans to be happy, always.”