THE RING January issue: At a glance 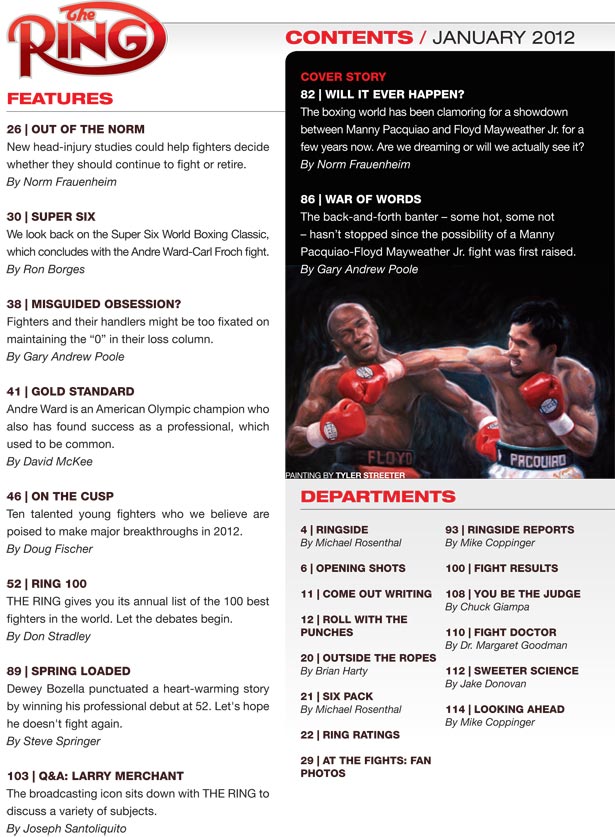 The boxing world remains fixated on it: Floyd Mayweather Jr. vs. Manny Pacquiao.

Regular contributor Norm Frauenheim explores in the January 2012 issue of THE RING the elusive mega-matchup in Will It Ever Happen?, in which he quotes the powerbrokers – Richard Schaefer of Golden Boy Promotions (Mayweather) and Bob Arum of Top Rank (Pacquiao) – and tries to gauge the likelihood of both sides overcoming impediments to make the fight happen in 2012.

Only one thing is certain: People will continue to ask about it as long as the fighters are physically able to face one another in the ring

Wrote Frauenheim: “There are times – make that most of the time – when Pacquiao promoter Bob Arum of Top Rank and Mayweather representative Richard Schaefer of Golden Boy must feel a little bit like that weatherman played by Bill Murray in Groundhog Day, a 1993 film. Every time they wake up, there they are again, facing another day when they’re sure to hear somebody, somewhere, ask the same old question. While ordering coffee or crossing the street, there it is all over again: Will Pacquiao and Mayweather ever fight?”

The January issue, which is on newsstands now, also features one of the most-popular annual features in the publication – THE RING 100.

Regular contributor Don Stradley conducted weeks of research before deciding upon the 100 best fighters in the world without regard to weight. Who’s No. 1? Check out the magazine, which is on newsstands now.

We know the list – which obviously is very subjective — will provoke a great deal of debate. Let us know where we went right or wrong.

And we’re pleased to present a Q&A with fearless broadcaster Larry Merchant, who became a YouTube sensation as a result of his post-fight confrontation with Floyd Mayweather Jr., in which he yelled for the world to hear “If I was 50 years younger, I’d kick your ass!” Merchant gives us fascinating insight into his life and career.

Among other highlights in the January issue: