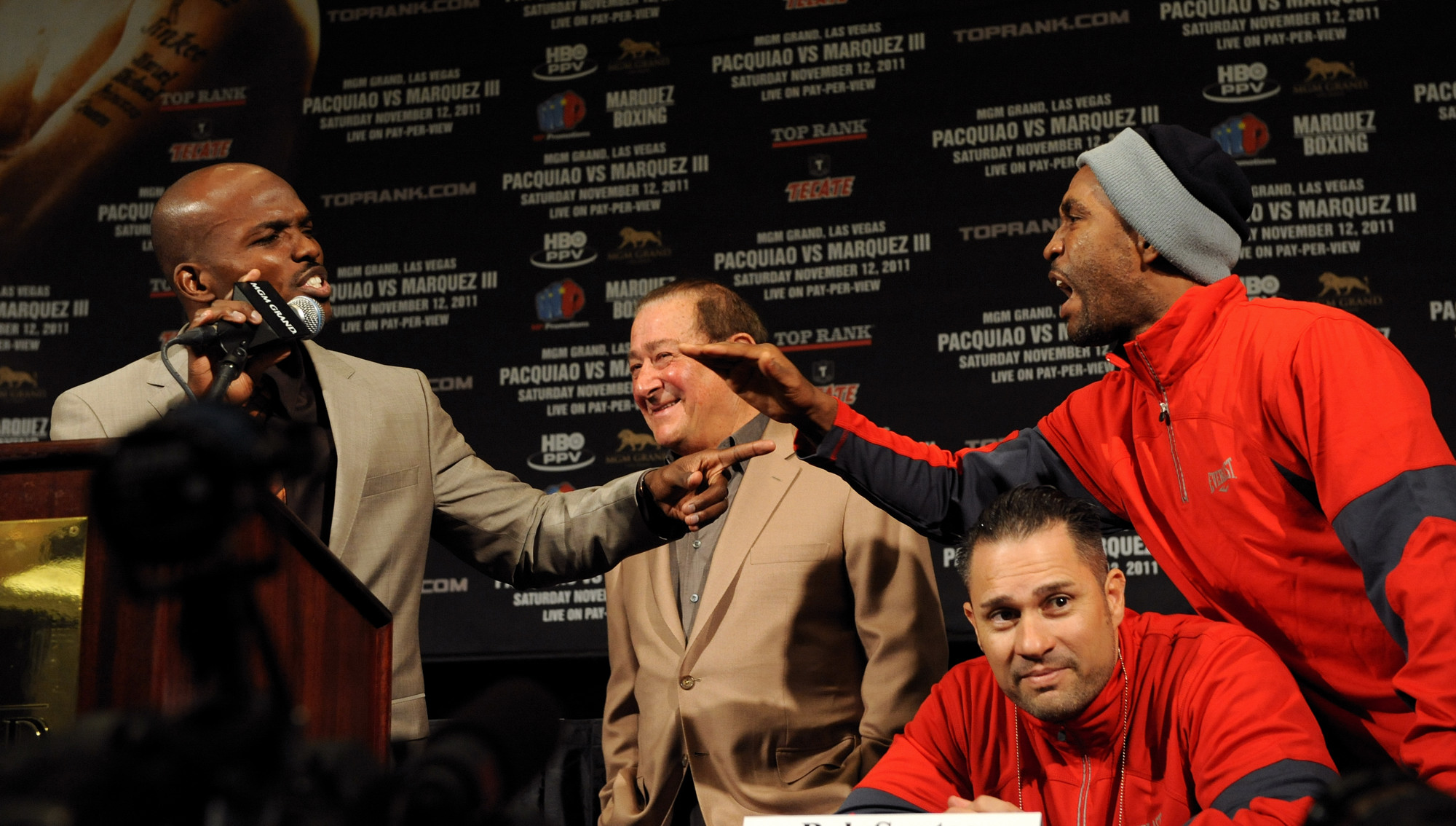 RING No. 8-rated WBO junior welterweight beltholder Bradley (27-0, 11 KOs) has signed with Top Rank Inc., and will debut with the company against the former four-time titleholder and Cuban Olympic gold medalist Casamayor (38-5-1, 22 KOs) on the HBO Pay Per View card featuring Manny Pacquiao against Juan Manuel Marquez at the MGM Grand in Las Vegas.

“There’s nothing that you can say to me that can hurt me. Nothing,” said the 28-year-old Bradley, who was accompanied by his wife, Monica, and their three children.

“At this point in my career, I’m stronger than ever. You can say anything that you want about me, but the one thing that you can’t say about me is that I’m not a winner. After Saturday night, I’ll be [28-0].”

Bradley was originally scheduled to face the 24-year-old WBA/IBF junior welterweight counterpart Amir Khan (26-1, 18 KOs) on July 23 before opting out of that fight. As a result, he is now involved in a lawsuit with his former co-promoters, Gary Shaw and Ken Thompson of Thompson Boxing Promotions.

In January, Bradley dethroned Devon Alexander (22-1, 13 KOs) as WBC junior welterweight beltholder by 11th-round technical decision, but was subsequently stripped due to inactivity.

“I felt that coming off of the Alexander fight, I didn’t get any damn credit. I beat a guy that didn’t want to fight. It was a fight that all of the fans and the boxing media wanted to see, but it didn’t live up to its expectations, but that wasn’t my fault,” said Bradley.

“I took a tremendous amount of bashing from the writers and from the reporters and from everybody, but I just had to eat it. That’s their opinion. But I’m just saying, that took me aback. That didn’t do anything for my career. If anything, it hurt my damn career.”

When Bradley’s WBC title became vacant, 35-year-old Erik Morales (52-7, 35 KOs), of Tijuana, Mex., won it with a 10th-round knockout over previously-unbeaten Pablo Cesar Cano (22-1, 17 KOs) of Mexico City in September, becoming the first Mexican-born fighter to earn a fourth crown over as many different divisions.

Although Bradley was legally advised that he could sign with Top Rank Inc., Shaw and Thompson filed two, separate attempts in court to block his fight with Casamayor, but they were unsuccessful.

“But now, look at this around me. I was at race track this past weekend, and they had a boxing ring set up there in honor of me. I’m like, ‘Wow, okay, this is what I’m talking about.’ I’m taking pictures with babies on both shoulders. I’m signing autographs. The fans were embracing me.”

If Bradley gets beyond Casamayor, he could be in line to face Pacquiao should Pacquiao get beyond Marquez, or, he might pursue t of a clash with Khan, who has a defense on Dec. 10 against IBF mandatory challenger Lamont Peterson (29-1-1, 15 KOs).

Bradley already owns a victory over Peterson, whom he floored in the third round of a clash of unbeatens for a unanimous decision victory and the WBO belt in December of 2009.

So under the circumstances, Bradley feels fortunate to be on an under card featuring Pacquiao.

“I think that the public wants the Khan fight, but everything has to line up perfectly. But it doesn’t bother me at all, being on the under card of a Manny Pacquiao fight. He’s done way more than what I’ve done and accomplished way more than I have in boxing,” said Bradley.

“It’s an honor to be on this card, but I feel that I deserve the spot to be on the card. But, there’s no shame in my game in not being the main attraction. I’m going to prove on Saturday night that I deserve a spot in the ring against [Pacquiao.]”

Pacquiao has been guaranteed $22 million, but, according to records provided to RingTV.com by Nevada State Athletic Commission executive director, Keith Kizer, is making a $6 million purse.

Marquez is getting a guaranteed $5 million, Bradley will earn just over a million, and Casamayor, $100,000.

CASAMAYOR’S TRAINER AIMING FOR THE KO

Bradley burst onto the scene in April of 2009 when he rose from two knockdowns to score a unanimous decision that dethroned the hard-hitting Kendall Holt (27-5, 15 KOs) as WBO titleholder.

“Kendall Holt knocked him down twice in a fight, but we believe that once Joel hits him with that left hand, there he goes,” said Diaz. “We think that Joel can do a whole lot better than what Kendall did.”

CASAMAYOR’S GOT A HARD HAT

An accidental clash of heads led to the stoppage of Bradley’s fight with Alexander, whose resulting cut over one of his eyes forced the bout’s outcome to the scorecards.

Playing on the fact that he believes Bradley to be a dirty fighter who leads with his head, Casamayor entered the press room wearing a white hard hat saying, “I’m ready for Bradley now,” long after the press conference had ended.

Top Rank Inc. CEO, Bob Arum, was given award for Promoter of The Year by the WBO.

“You guys can write about it,” said Arum, who turns 80 next month. “I like reading about myself, as long as it’s not my obituary.”

Promoter Don King, who turned 80 in August, recently received a late gift of $500,000 from former three-division world titleholder Felix Trinidad, whom he promoted in the past.

“You can imagine my surprise when I received this gift from Tito and Papa. We had been planning on getting together, but our schedules had not lined up,” said King.

“What a pleasant surprise it was for them to let me know they still love and appreciate me. I feel the same way about them.”

Bradley to debut with Top Rank on Pacquiao-Marquez III undercard