Zaveck is fazed by neither geography nor Berto 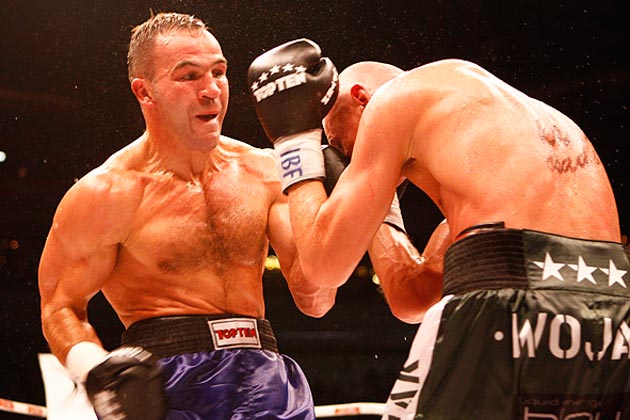 IBF welterweight titleholder Jan Zaveck recently Tweeted: “A real champion doesn’t hold his title hostage.” In other words, a fighter shouldn’t win a belt and then fight the least-threatening opponents available with every possible advantage just to hang on to it.

Zaveck is backing up his words this weekend.

The 34-year-old Slovenian will be making the fourth defense of his title against Andre Berto on Saturday night in Biloxi, Miss. — not far from the former WBC titleholder’s home in Winter Haven, Fla. on HBO's Boxing After Dark.

Some would argue that Zaveck (31-1, 18 knockouts) was the victim of hometown shenanigans when he lost a split decision to Polish rival Rafal Jackiewicz in 2008 in Poland, a setback Zaveck avenged last September in Slovenia.

Zaveck also has fought outside Europe only once, when he stopped Issac Hlatshwayo in the third round to win his belt last December in Hlatshwayo's native South Africa.

He doesn’t seem to be fazed by geography or his opponent.

“Yes, I learned many … things from losing,” Zaveck said in solid English on a recent conference call, referring to the loss to Jackiewicz. “I am sure that if you have good condition and you have quality, it does not matter where you fight.

“There’s only one point, this is what interests me: I am out to give my maximum and I will on Sept. 3rd.”

Even if it doesn’t matter where you fight, it certainly matters who you fight.

Zaveck has faced some good opponents, two in particular. Hlatshwayo had a formidable resume going into their fight, having beaten the likes of Kaiser Mabuza, Cassius Baloyi, Nate Campbell and Delvin Rodriguez, with whom he also fought to a draw. Zaveck’s TKO in Johannesburg apparently shocked the local fans.

And Jackiewicz, rated No. 6 by THE RING, is a world-class fighter with or without a hometown advantage.

Neither Hlatshwayo nor Jackiewicz is Berto, though.

Berto (27-1, 21 KOs) isn’t the best technician in the world but Zaveck probably hasn’t seen anything quite like the Haitian-American’s combination of speed, athleticism and power, all of which were on display in his thrilling loss to Victor Ortiz in April.

Zaveck was asked on the conference call whether he believes Berto is the best fighter he will have faced.

“I want to be honest … yes, by name,” he said, referring to the fact that Berto is a more-established attraction. “But I don’t know what that means in practice. In the ring, I have many opponents who were by name unknown, but in the ring [they were effective].

“That’s why maybe I can give an answer to this question after the fight.”

Zaveck is also unknown, at least in these parts. That’s what happens when a boxer fights almost exclusively on or near his home turf, as Zaveck has. He has fought eight times in his native country, including his first three title defenses.

The titleholder appears to be a good fighter. He is similar to Berto both in build (short and powerful) and style (aggressive). He broke down Hlatshwayo with controlled aggression and a vicious two-handed attack, leaving no doubt who the better fighter was.

Zaveck is rated No. 4 by THE RING, one notch below Berto.

Can he compete with Berto? Who knows? Like so many accomplished Europeans who find their way to the U.S., he’s a bit of a mystery. We’ll learn a lot about him on Saturday night.

“At this point,” Zaveck said, “I am unknown, but after the fight, you will know me.”

If he can pull it off, not holding the title hostage will have paid off in a big way.