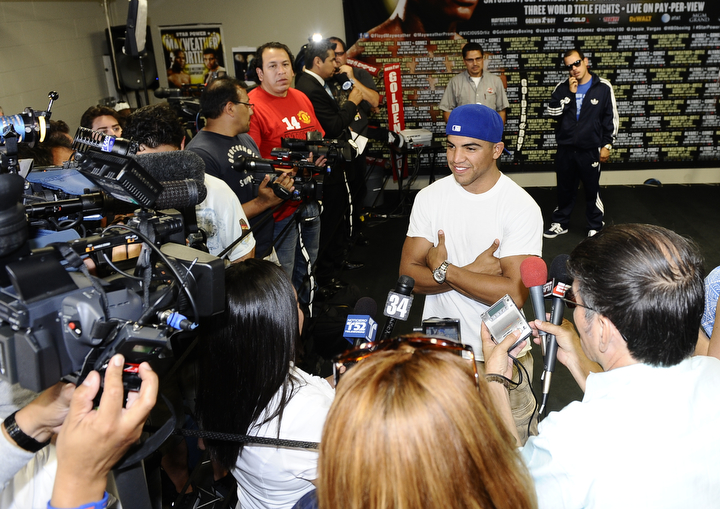 VENTURA, Calif. — Victor Ortiz was ready to go home and hit the showers once the sun began to set the day of his open media workout for his Sept. 17 showdown with Floyd Mayweather Jr. at the Knuckle Headz Gym.

The recent media day included a ceremony with kids from the local chapter of Big Brothers Big Sisters, for which Ortiz is now a national spokesperson, 10 rounds of shadowboxing, working the mitts and hitting the heavy bag for photographers, and at least a dozen interviews with newspaper writers, internet sites and Spanish-language television.

The media event began with an outdoor lunch served at 1:30 p.m. Ortiz figured he was free to go around 6:00 p.m., but as he was about to leave the gym with some friends, publicists from Golden Boy Promotions informed him that there were still a few on-camera interviews to be done. Ortiz let out a deep sigh, returned to the ring area and answered every question.

He won’t admit it, but being in the media spotlight takes some getting used to. Nobody paid attention to the 24-year-old southpaw when he was training for Andre Berto, the undefeated WBC welterweight titleholder who was expected to take Ortiz’s “questionable” heart.

Ortiz took Berto’s heart and the title in dramatic fashion on April 16. Four and half months later, a production crew for HBO’s 24/7 series follows his every move in preparation for Mayweather, who he’ll fight in the main event of a pay-per-view extravaganza from the MGM Grand in Las Vegas.

Much has changed, but Ortiz, and those closest to him, insist that he hasn’t. The surly, me-against-the-world attitude that he carried into the Berto fight worked for him and he says he’s sticking with it for Mayweather.

“I shut it all out,” Ortiz told RingTV.com. “The media, the cameras, even the fans rooting for me, who I appreciate. I’m not letting it effect me.

“My mindset hasn’t changed since the Berto fight. It’s only gotten stronger. I let too many people get close to me before the Maidana incident and I’ve learned my lesson.”

The “Maidana incident,” of course, was Ortiz’s sixth-round stoppage to 140-pound standout Marcos Maidana in June of 2009. Most of the boxing world counted him out of his welterweight debut against Berto based solely on the manner in which he submitted to the Argentine slugger.

“The Foxwoods casino listed Victor as a 14-to-1 underdog the day he fought Berto. He opened as a 7-to-1 underdog to Mayweather, so maybe people are giving him half a chance to win this time,” joked Ortiz’s co-trainer Mario Aguiniga.

It’s not a laughing matter to Ortiz.

“I had something to prove against Berto, and I think I proved it, but I’m still the underdog,” he said.

Ortiz (29-2-2, 22 knockouts) is reportedly training the way an underdog should train — hard. 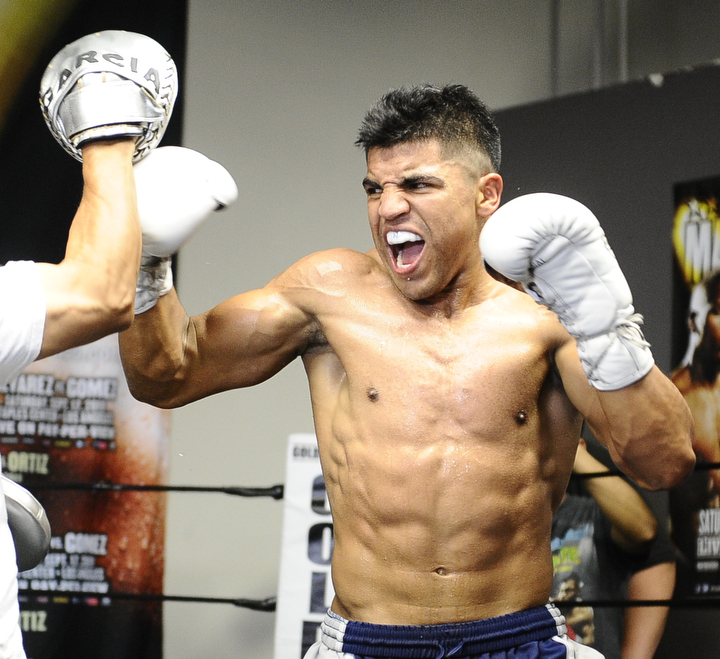 “He's working like I’ve never seen,” said David Rodela, a gym mate and occasional sparring partner. “I think he’s working harder for this fight than he did for Berto.

“It was like he was possessed before the Berto fight and he’s held on to it for this fight, at least when he’s in the gym. He’s still a nice guy, but he’s all business when it’s time to train and he doesn’t let the HBO camera crew get in his way or shake his focus. Once the bell rings, he changes, he gets mean.”

Rodela, an active prize fighter from Oxnard, Calif., who has known Ortiz since their amateur days, says the mean streak is a good thing for the newly crowned titleholder.

“Being nice was always his problem,” Rodela said. “He was too cool with everybody, including his sparring partners. He’s not like that anymore. No more touching gloves with them before every round and no more smiles in the ring. Once that bell rings it’s just his game face and a lot of hard punches. He’s more aggressive than ever. I feel sorry for the sparring partners.”

Ortiz’s head trainer Danny Garcia says he feels sorry for anyone who counts his fighter out against Mayweather.

“He shouldn’t be looked at as the underdog,” said Garcia. “Victor proved that he could beat a bigger, supposedly faster and stronger, world champion. He beat the best young welterweight in boxing. He beat an undefeated fighter who can punch.

“The way he beat Berto makes him the best welterweight in the world, better than Manny Pacquiao, who is fighting older fighters, and better than Mayweather, who was the best welterweight — was the best. Now it’s Victor, and he’s going to prove it because he hasn’t changed at all since the Berto fight. He trains just as hard and he’s just as hungry.”

One interested observer who believes Ortiz has changed — for the better — is his promoter, Oscar De La Hoya.

“I think he’s got that swagger in his walk now that he’s got the title,” De La Hoya told RingTV.com. “I didn’t see it in

him before the Berto fight, but now there’s a new-found confidence and confidence is everything against Mayweather.”

De La Hoya, who fought Mayweather in 2007, should know. He’s come the closest to beating Mayweather since the undefeated (41-0) defensive wizard stepped up from the lightweight division in 2004.

De La Hoya fought Mayweather to a split-decision loss but admits that age and lack of conditioning enabled his fellow future hall of famer to outbox him in the late rounds of the bout. He doesn’t believe Ortiz will have the problems he had with Mayweather and he’s told the young fighter so.

“I told him that Mayweather is not going to make the fight. He’s going to wait for him. If Victor gets on his toes and works that southpaw jab of his he’s going to give Mayweather fits as long he’s more active. There might be times in the fight when Mayweather tries to walk him down with that defensive stance,” De La Hoya continued while imitating Mayweather by tucking his chin behind his left shoulder and cocking his right hand as if ready to counter punch.

“And that’s when Victor has to be willing to hit him anywhere — to the body, behind the head, on his arms and shoulders. Victor can break Mayweather down.”

De La Hoya disagrees with the notion that Ortiz’s only shot at beating Mayweather is by catching and knocking out the odds favorite early in the bout.

“I think Victor will take over during the second half of the fight,” he said. “I couldn’t do it because I was an old 34 when I fought Mayweather. Now Mayweather is 34 and Victor is a young 24. He can take Mayweather out in the late rounds. He can even win a decision.”

Most boxing observers consider Ortiz out-pointing Mayweather to be an almost inconceivable outcome to the anticipated matchup. However, Ortiz proved the boxing world wrong once and his friends say he’s even more convinced that he can do it again.

The goal, according to Garcia, goes beyond Mayweather and Sept. 17.

“Victor wants to be where he is now,” he said, “and he wants to be there for many years.”