Ring Ratings Update: Povetkin advances to No. 2 in heavyweight rankings

Alexander Povetkin did not set the boxing world on fire with his 12-round unanimous decision over Ruslan Chagaev on Saturday in Germany, but the 31-year-old heavyweight contender’s victory was strong enough to move him ahead of Tomasz Adamek in THE RING’s ratings.

Povetkin (22-0, 15 knockouts), who advanced from No. 3 to No. 2 in the magazine’s heavyweight rankings, boxed on even terms with Chagaev before a late-rounds rally helped him outpoint the former titleholder whom THE RING rated No. 5 prior to the fight. 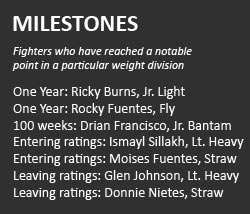 “The vast majority of the Ratings Advisory Panel Members participating this week suggested that Alexander Povetkin switch places with Tomasz Adamek based on his win over Chagaev, which gave him a better overall record at heavyweight than Adamek,” said Nigel Collins, Editor-in-Chief of THE RING magazine. “After due consideration and a review of both men’s records, the Editorial Board agreed and made the change.”

Povetkin defeated his second RING-rated heavyweight in Chagaev (27-2-1, 17 KOs), a 32-year-old veteran from Uzbekistan who has been in the magazine’s Top 10 (250 weeks) longer than any other fighter apart from world champ Wladimir Klitschko.

In October of 2007, the 2004 Olympic gold medalist from Russia scored an 11th-round stoppage of former two-time titleholder Chris Byrd, THE RING’s No. 8-rated heavyweight at the time. Povetkin followed the TKO of Byrd by outpointing then-undefeated (30-0) Eddie Chambers in January of 2008. Chambers, who went on to be ranked as high as No. 3 in THE RING’s ratings, is currently No. 5.

Adamek, a former light heavyweight titleholder and RING cruiserweight champ, has defeated one RING-ranked fighter, Chris Arreola, since stepping up to the heavyweight division in late 2009. The Polish veteran’s majority decision over Arreola, rated No. 6 at the time, enabled him to debut at No. 4 in the magazine’s heavyweight rankings.

Adamek is scheduled to challenge THE RING’s No. 1 contender, Vitali Klitschko, for the WBC title on Sept. 10 in his native Poland.

Povetkin (No. 3 last week) moves to No. 2 on the strength of his win over Chagaev (No. 5 last week). Povetkin’s advancement bumps down Adamek (No. 2 last week) to No. 3, while Chagaev tumbles to No. 9. The shakeup also elevates Chambers (No. 6 last week) to No. 5, while Robert Helenius (No. 9 last week) jumps to No. 6 after knocking out Sergei Liakhovich.

Glen Johnson (No. 4 last week) departs because it has been more than a year since he last fought at 175 pounds. Johnson’s two most recent bouts were at super middleweight and he has signed to fight Lucian Bute, also at 168 pounds. Johnson, however, retains his No. 7 rating at super middleweight. His exit from the light heavyweight division allows all rated below No. 4 last week to climb one rung each and makes room for Ismayl Sillakh to debut at No. 10.

“While THE RING supports fighters, such as Glen Johnson, campaigning in more than one weight class, they must be active in both to remain ranked in both,” said Collins. “If Johnson should return to the light heavyweight division in the future, his earlier work there will be taken into consideration when evaluating whether and where he should be rated.”

Donnie Nietes (No. 4 last week) departs because he is now campaigning at at junior flyweight and is scheduled to challenge for an alphabet title a 108 pounds. The void is filled by Moises Fuentez who upset Raul Garcia (No. 3 last week). Fuentes enters at No. 3, while Gracia drops to No. 4.