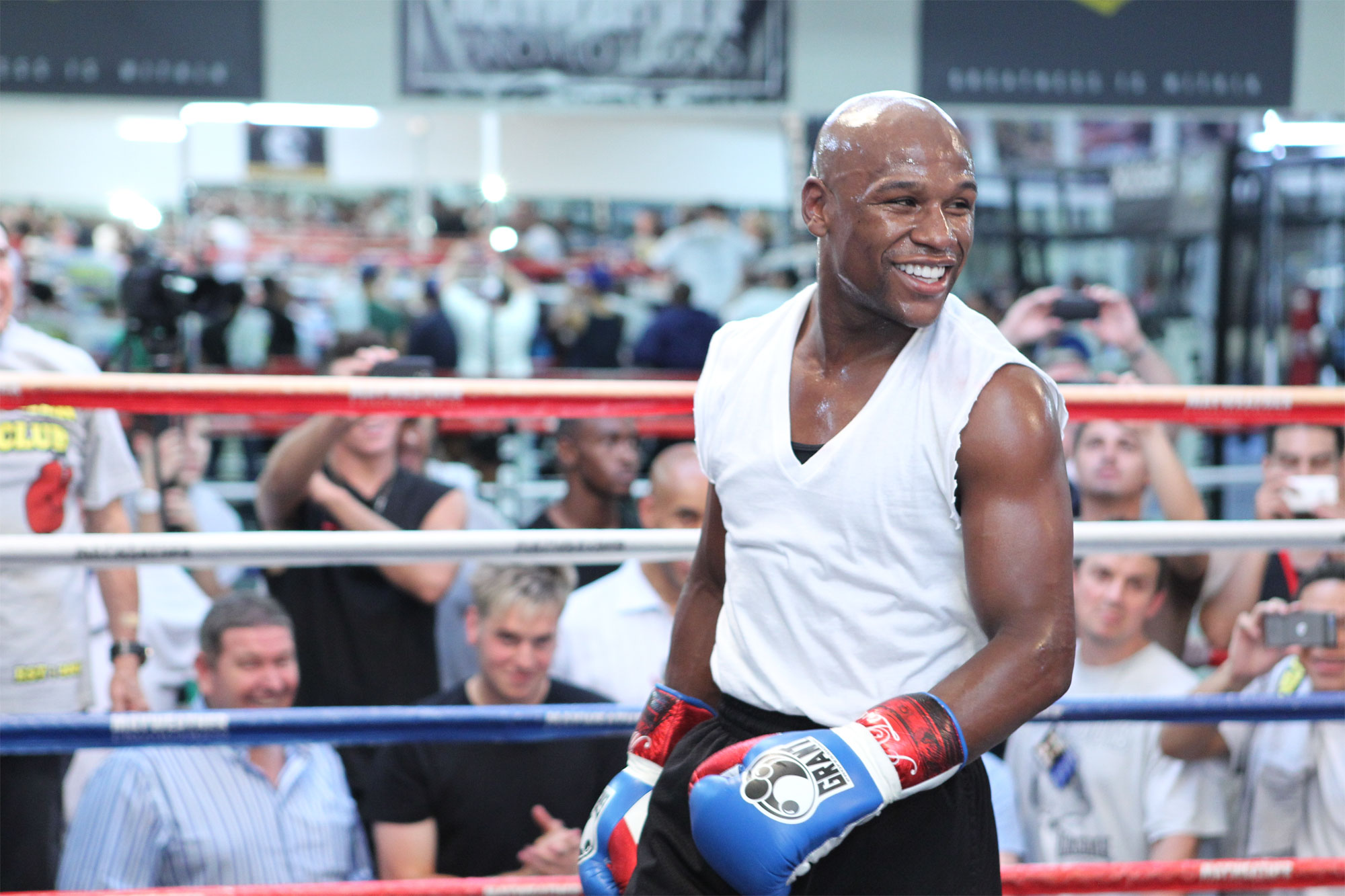 Floyd Mayweather Jr. revels in fan attention during a recent public workout. He discusses his love for the fans in the second of his weekly blog posts provided by HBO, whose pay-per-view arm will televise his fight with Victor Ortiz on Sept. 17.

One of the best parts about my job is interacting with the fans.  Without the fans, none of this would be possible. First and foremost, I fight for my family, my children.  I want to give them the best life possible so I remember that with every fight and each victory is for them. And I even appreciate the fans that don’t support me either. It’s all love.

But after my family and children I fight for the fans.  I have always appreciated their support and when I am in public there really isn’t an autograph I won’t sign.  If it wasn’t for the fans, I would not be the king of pay-per-view.  I am in awe of their support and that is why I go out of my way to make them happy.  For my last four fight announcements I have always made sure they are included by inviting them to the media tour press conferences.  They show me such love and support and it is for this reason that I can continue to train and work hard for each fight in front of me.  The fans are what brought me back to the square circle this time too.  I knew that they waited long enough to see me fight again. So when I step into the ring against Victor Ortiz on September 17, I plan on giving them another great performance.  It’s the only way to make them happy. It’s the Mayweather way and experience.

I have had some great times with my fans over the years.  When we announced this fight against Ortiz in June, we started the press tour in New York City and fans started to line up in the heat beginning at 6:00 am [the press conference started at noon]. The fans filled the two balconies at the Hudson Theatre in Times Square and stayed for hours for autographs and pictures. Then we went to Los Angeles and tons of fans came out to this event too. We had it at night because it’s Hollywood baby and we were promoting STARPOWER.  They too were lining up in the early morning to get a great seat to watch the show. My fans know that when I fight, it is a mega-event, and they wanted to be a part of it, which means the world to me.

But I think my most memorable fan moment was in London, England when I went there to promote my fight with Juan Manuel Marquez. I told my CEO Leonard Ellerbe I wanted to do a public workout. He found the Peacock Boxing Gym and we arranged for the workout and invited the fans. It was unbelievable how many people showed up. The gym was packed, standing room only. I let them come right to the edge of the ring and surround me on all sides while we worked out. The energy and commotion was something I will never forget. After we finished the workout, I walked out to the balcony of the building so the fans who waited hours to see me, and couldn’t get in the gym during the workout but were still there waiting for me, felt my gratitude for their support. I remember we could barely make it back to our cars. It was a fantastic experience and after my September fight I plan to go back and do it again. This time we will find a bigger place.

I also have to give much love to my 1.5 million Twitter followers. When I announced that I was returning to the ring on my Twitter account [@floydmayweather], even I was amazed at how fast the news spread. I love being able to reach all of my fans at one time and all the time. The responses and messages I get every day are motivation for me to keep working hard in the gym and bring home a win on September 17.

“STAR POWER: Mayweather vs. Ortiz” is scheduled for Sept. 17 at the MGM Grand Garden Arena in Las Vegas and will be produced and distributed live by HBO Pay-Per-View beginning at 6 p.m. PT / 9 p.m. ET.

HBO’s Emmy Award-winning all-access series “24/7” premieres an all-new edition when “24/7 Mayweather/Ortiz” debuts at 10 p.m. PT / ET on Saturday, Aug. 27. The four-part series will air for three consecutive Saturday nights before the finale airs the night before the welterweight showdown.