Q&A: Ariza discusses reunion with Khan and feelings about Conte 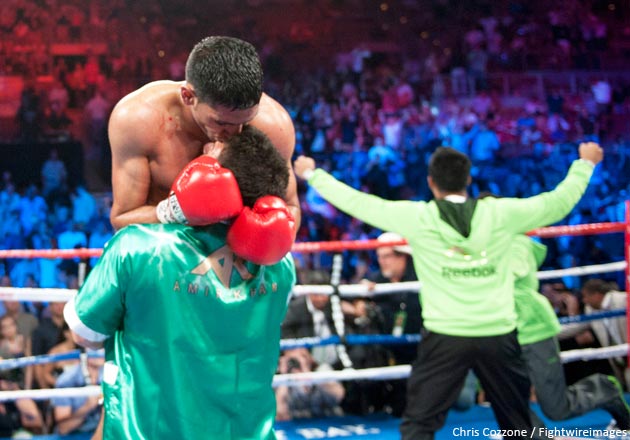 Amir Khan plants one on the forehead of fitness coach Alex Ariza after KOing Zab Judah. Clearly they're happy to be reunited.

Strength and conditioning trainer Alex Ariza was the first man into the ring to give Amir Khan a bear hug following his fifth-round knockout of Zab Judah on Saturday in Las Vegas.

Ariza was not in Khan's corner for his sixth-round technical-decision win over Irish southpaw Paul McCloskey in April after having worked alongside trainer Freddie Roach for Khan's previous six victories.

The two had split over a financial dispute following his unanimous decision over Marcos Maidana in December.

The mutual zeal at their reunion was plainly evident, as was Khan's increased size and improved power and work rate in a beat down that ended when Khan stopped Judah with a body shot in the fifth round.

"We trained very hard," said Khan during his post-fight interview. "I just want to thank Alex Ariza for getting me into the best condition that I could ever be in."

Khan has now won eight straight fights, four of them by knockout, since he was stopped in one round by Breidis Prescott in2008. That run includes wins over Marco Antonio Barrera, Andreas Kotelnik, Paulie Malignaggi and Maidana.

Ariza spoke to RingTV.com in this Q&A about Khan's performance, also sharing his thoughts on matching philosophies against BALCO founder and controversial conditioning and nutrition guru Victor Conte, who helped Judah to prepare for Khan.

RingTV.com: Why were you the first guy in the ring after the fight?

Ariza: As far as me being the first guy in the ring, it was just great to have spent so much time with somebody and then have it all pay off. Of course, there was a lot of excitement besides that. With all of the stuff that has happened between us, and then, having all of that stuff be in the past, it was just like one of things where we just got back to our winning ways, really.

When I got in there, you know, yeah, it was a release to just see him back and to see him strong again and so dominating. Amir was using his physical stature along with his skills and executing all of those things together.

RingTV.com: How do you feel that Amir's increased strength and resilience manifest itself against Zab?

Ariza: Zab was very dangerous, and he tried to set Amir up with those hooks. Amir got caught with a big hook at the end of a round. But you know, he wasn't even shook or fazed by it. In the meantime, right after the press conference, I heard Zab Judah tell somebody as he was walking past us that, 'I had no idea that he could hit that hard.' He said, 'Man, I just had no idea.'

That just told me that me that we're back on the right track. So even when the fight was starting to really turn in Amir's favor in the fourth and fifth round, Amir told me, he says, “You know, I haven't even got my second wind yet.”

RingTV.com: What words did you share with Amir when you reached him in the ring?

RingTV.com: What was the focus of Amir's training for this particular fight?

Ariza: I think that we said it a little bit, but tried not to give too much away. We spent pretty much the entire beginning of the camp focusing on strength training. In the past, we always sort of focused on his speed and his conditioning, going in with the concept that it was going to go 12 rounds. So it was one of those things that we sort of just picked up where we left off with the Maidana fight.

RingTV.com: What are your thoughts on having faced an opponent in Judah who was involved with Victor Conte?

Ariza: Somebody sent me an article saying that Victor does more of a scientific program apparently than I do. Clearly, though, he does not. You know, muscles don't win fights. The article said that we should all subject our fighters to his style of drug-testing. Here's the thing: Nobody thinks that Victor Conte's fighters are doing anything spectacular that they think that they're on steroids.

But that's how good our fighters are. That's how good they're performing. That's the kind of results that we're producing. Victor Conte's not showing me anything. So they can subject themselves to whatever testing that they want. I couldn't care less. My guys are not on steroids, but if you say, “Whoa, Nonito Donaire is on this, and he's taken this test,” or, “What's his name has taken this test?” Well, good for them.

But honestly, they're not really turning any heads. What's turning heads is what Amir Khan did against Zab Judah. Nonito Donaire is just fighting small guys, and he should be beating them up. He's not even gone five rounds with anybody that's supposed to give him a real test.

So, Victor's fighters are not making any noise. That's why they're eager to go, “Hey, I'll take this test.” Well, why shouldn't you? You're not even on anybody's radar. People don't think that you're even doing anything.

RingTV.com: Are there any other philosophical differences that you have with Victor Conte?

Don't get me wrong, I respect his hustle. He's trying to sell some of his beans. He wants to make everybody think that they're going to be able to grow a bean stalk. But the real people out here like us, we know his hustle. He can sell his powders, sell his vitamins, but he should really let the professionals handle the elite athletes.