Alvarez proves he’s not a “kid” by dominating Rhodes 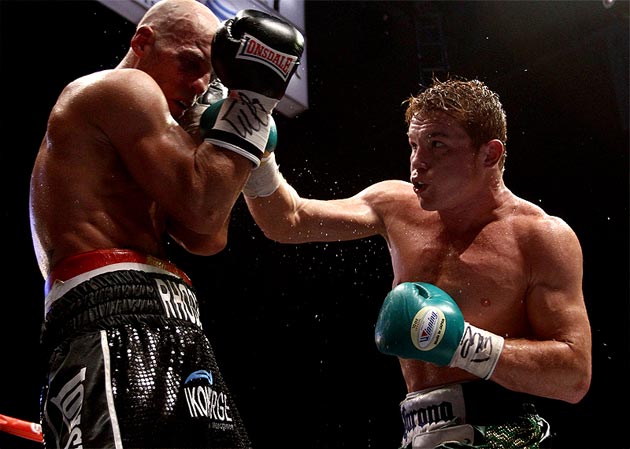 A word of advice to Saul Alvarez’s next opponent:

Don’t look at the soon-to-be 21-year-old Mexican star as a “kid,” or a still-developing up-and-comer. The junior middleweight beltholder is a complete fighter who is as mature as any seasoned veteran.

Ask Ryan Rhodes, who Alvarez dominated en route to a 12th-round stoppage in Guadalajara, Mexico, on Saturday if you don’t believe it.

The 34-year-old British contender was supposed to be the more-experienced fighter and arguably the most-talented fighter Alvarez had ever faced. More than a few fans and members of the media, most of whom were British, gave Rhodes a good shot at pulling the upset based on Alvarez’s less-than-spectacular title-winning effort against Matthew Hatton in March.

Alvarez won a lopsided unanimous decision to pick up the vacant WBC 154-pound title against Hatton but he failed to drop or overwhelm the ordinary and undersized younger brother of Ricky Hatton. Alvarez also failed to get out of the way of Hatton’s return fire, causing many observers to consider him lucky that Ricky’s little bro can’t punch. 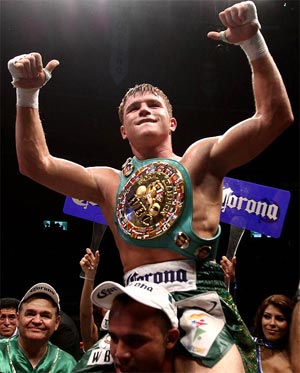 Rhodes, who started his career at middleweight, was bigger than Hatton (a natural welterweight), faster, harder punching and possessed a versatile switch-hitting style. In other words, the 16-year veteran was supposed to be another test for Alvarez.

If that was so, Alvarez (37-0-1, 27 knockouts) passed with flying colors. The 20-year-old phenom consistently beat Rhodes to the punch with crisp combinations and he deftly evaded most of the British standout’s return shots whether he was sticking and moving or intelligently walking down his befuddled challenger.

Alvarez couldn’t miss with his jab, straight rights, uppercuts, and of course, left hooks to the body, despite stalking a moving target who constantly switched from right-handed to southpaw stance.

Rhodes, who suffered a flash knockdown in the fourth round, did not have an answer for Alvarez’s unexpected ring generalship and varied arsenal, especially the body shots, which he said took the fight out of him.

“I probably underestimated him, underestimated his power,” Rhodes said during his post-fight interview on HBO, which televised the fight in the U.S. “He’s a strong young kid. His body shots were fantastic. They took a lot out of me. He really caught me with some good body shots.”

Alvarez landed 219 of 590 total punches (37 percent), according to CompuBox stats. Rhodes was only able to land 90 of 343 total punches (26 percent). Alvarez landed a little over half of his total power shots, which told on the battered face of Rhodes, who suffered a nasty gash under his right eye and a mouse under his left eye.

Rhodes had his best round in the 11th, when he finally let his hands go, but Alvarez responded by stepping up his pressure and punch volume in the 12th, immediately buckling the Sheffield native’s legs. Referee Hector Afu halted the bout 48 seconds into the 12th with Rhodes still on his feet when he saw the British fighter’s trainer Dave Coldwell climbing up the ring apron to toss in the towel.

“I did a really good job,” said Alvarez, who spent one month in an intense training camp in Big Bear, Calif., where he sparred dozens of quality rounds with powerful middleweight titleholder Gennady Golovkin. “I trained really hard for this and it paid off.”

That it did. Alvarez looked sharp enough to have perhaps won over some of his critics.

Of course, many will say that Alvarez dominated another mediocre English fighter. Others will suggest that Rhodes didn’t try hard enough or that he needs to hang up the gloves.

“I’ve been beaten up by a superstar of boxing tonight,” he said. “This isn’t the end of Ryan Rhodes.”

Saturday night could be the beginning of a long and exciting run by a soon-to-be major player in the sport.

Alvarez is expected to get back into the ring in September. His U.S. promoter, Golden Boy Promotions, might have him headline a big card in Mexico on Sept. 17, the same night as the Floyd Mayweather-Victor Ortiz fight, and have Alvarez’s fight be part of the pay-per-view broadcast in the U.S.

Who he fights next is unknown at press time but there are some formidable contenders waiting for their shot at his WBC belt.

If they think Alvarez isn’t ready for them, they may be sorely mistaken. Alvarez believes he’s ready.