Weekend Review: Morales fools us all 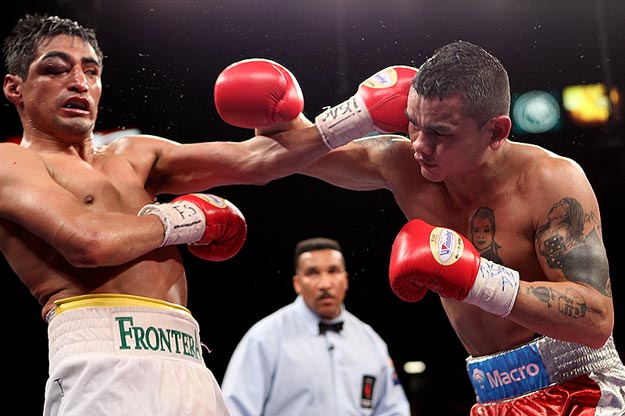 Erik Morales: Biggest Winner? For a fighter who lost? Of course. Morales lost a majority decision to Maidana on Saturday night in Las Vegas on pay-per-view television but realized perhaps a more-important objective: He proved – much to our shock – that he remains an elite boxer worthy of big fights. And he did it with one eye. He almost beat one of the most-vicious warriors in the world even though his right eye was closed in the first round. Astonishing. No one ever questioned Morales’ heart. We just didn’t believe he had the tools to compete on an elite level at this point of his career. He told us we were wrong. We didn’t’ believe him. He told us he could compete with a fighter of limited boxing skills. We didn’t believe him. He told us that he improved in each of his three fights since his return to boxing. We didn’t believe him. We wrote him off and he almost pulled off a monumental upset, giving us one more fight-of-the-year candidate in the process. Are you kidding? We’ll believe him from now on. Morales has had many great moments in the ring. This one is up there with the best of them.

The “experts:” Don’t be too hard on us. We were only looking at the facts. Morales was knocked out twice by Manny Pacquiao and then lost to capable but limited David Diaz, after which Morales retired. No one said it was the wrong decision. Then, 2½ years later, he resumed his career in a weight class that seemed too heavy for him. He defeated three journeymen in his comeback but didn’t look like the Erik Morales we knew. Then he decided to fight Maidana, one of the true beasts in the sport. Crazy, we thought. Crazy like a fox. The wily old veteran knew exactly what he was doing. He knew that Maidana’s lack of world-class hand speed and defensive liabilities were weaknesses he could exploit, which is why he chose the Argentine as his opponent. He knew he could make a big statement even if the rest of us didn’t see it coming. The future Hall of Famer fooled us all. And we’re grateful that he did. 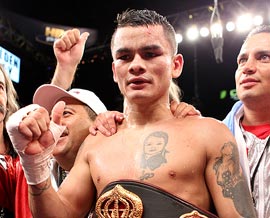 Marcos Maidana: Maidana said going in that this wasn’t going to be an easy fight. We didn’t believe him either, so certain were we that Morales had nothing left after so many grueling wars. He was right too. The old man still has the heart of a warrior and more skills than any of us realized. Thus, Maidana had to work extremely hard – using all of his energy reserves – to pull out a majority decision with a strong finish and regain a little momentum in his career. Remember, he was coming off a unanimous-decision loss to Amir Khan last December. A second consecutive setback wouldn’t have destroyed his career – particularly after such a rousing fight – but his credibility would’ve taken a significant hit. Now he remains in position for more big-money fights at 140 pounds. I can think of one particularly compelling matchup: A rematch with Morales.

Maidana-Morales scoring: Most fans seem to think that the 116-112 scores for Maidana – if not his decision victory – did not reflect what happened in the ring. RingTV.com co-editor Doug Fischer had 115-114 for Maidana and he said the consensus at ringside was 115-113 for Maidana. I watched on TV, just as most of you did. And I think 116-112 is about right. I feel strongly that Maidana won the first four rounds. Morales landed some good punches here and there but was clearly outworked. That leaves the final eight rounds. You would have to give Morales six of those rounds to make it a draw. And that’s just not what happened. I think Maidana won four of the eight. Morales landed the cleaner shots but Maidana also landed his share of solid blows and continued to outwork his older rival, particularly in the final few rounds. Morales simply didn't win that fight. 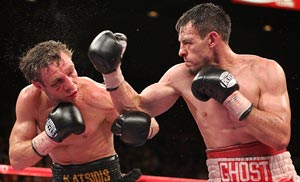 Robert Guerrero: Katsidis isn't a great fighter but he's a very good one and he gives all his opponents hell, even a fighter as good as Juan Manuel Marquez. That’s why Guerrero’s performance on Saturday was so impressive. He dominated the Australian warrior from beginning to end with a stiff right jab, punishing lefts and the poise of a true champion to win a one-sided decision in the 12-round lightweight bout. It was a spectacular performance. Oscar De La Hoya, his promoter, was right when he said: “Tonight was his coming out party. Tonight he showed the public what he is all about.” Guerrero is a monster at 135 pounds but he might have to move up to 140 for lack of big-fight opportunities at lightweight. A natural matchup at 135 is Guerrero vs. Brandon Rios but it won’t happen because of promoter politics. Guerrero will give up his physical advantage at 140 but he’ll make more money. And if his performance on Friday is an indication, he’ll do just fine.

Ishida-Kirkland: I must confess that I was among those who predicted big things for Kirkland, whose Tyson-like aggression and power can be captivating. One thing I failed to take into account: A lack of elite-level skills. Kirkland returned this year from a stint in prison and picked up where he left off, stopping Ahsandi Gibbs in one round in March. Kirkland did the same to Jhon Berrio in two rounds in his next fight but a strange thing happened in the first round: He was stunned by several hard punches himself. Red flag. Nobuhiro Ishida, a light-punching 35-year-old from Japan, obviously saw video of the Berrio fight because he began to land straight punches from the opening bell. The result? Kirkland went down three times, the third time for good as referee Joe Cortez had seen enough. The fight lasted only 1 minute, 52 seconds. We shouldn’t write Kirkland off. He is only 27 and, to be fair, he was still shedding rust after returning from a stint in prison. He needs to go back to basics, though. Aggression and power isn’t enough. 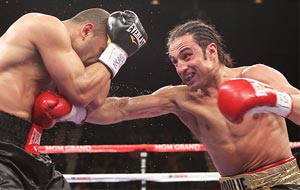 ”Action Heroes:” The Maidana-Morales card Saturday night at the MGM Grand in Las Vegas had everything. We had a good performance by loquacious veteran Paulie Malignaggi, who can still turn in a beautiful boxing performance.  We had a stunning upset, Ishida's first-round knockout of Kirkland. We had a superb performance by Guerrero, who dominated always-tough Katsidis. And, in an unforgettable finale, we watched Morales turn back the clock and almost beat one of the most-fearsome fighters in the world. Whew. What a ride! The fact is promoters need good matchmaking and a little luck to stage a pay-per-view show that is worth every cent of the fee. Golden Boy Promotions had both on Saturday night. That was one of the most-gratifying pay-per-view cards in recent memory.

Marco Antonio Rubio: The Mexican boxer-puncher seemed destined to be an also ran. He lost back-to-back decisions to Kassim Ouma and Zaurbek Baysangurov in 2006, the second setback a one-sided decision. And he was knocked out by Kelly Pavlik in nine rounds in his only title shot in 2009. Rubio has demonstrated the same resilience in his career that he showed against hard-punching prospect David Lemieux in a title eliminator Friday night in Montreal, though. He never lost faith in himself and his reward was a breakthrough victory. The 8-1 underdog endured with guile and toughness an onslaught in the early rounds, which he expected, and waited for his opportunity. When it came, he seized it. He began to do damage in the sixth round and finished the job in the seventh, stopping Lemieux at 2:36 of the final round. Now Rubio is in position for another shot at a title and a big-money fight. Good for him.

David Lemieux: When a fighter has dominated virtually every round of every fight in his career, it’s always a shock to see him lose. That was the case when Rubio stopped Lemieux. The Montreal native was 25-0 and had stopped all but one opponent going into the fight. Twenty-one of those knockouts came in two rounds or less. He was a superstar in the making, or so it seemed. The fact is the 22-year-old hadn’t been tested against an opponent of Rubio’s ilk, a complete fighter with vast experience. He failed the test. Lemieux was hurt by a punch that appeared to land behind his ear, the kind that upsets a fighter's equilibrium, and he never recovered. Just like that, a shooting star flamed out. That doesn’t mean he’s finished, though. We’ll learn more about Lemieux now than we did in that fight. Was that a learning experience on which he can build? Or was it a setback that will destroy him? We’ll see.

Vivian Harris: We could’ve told Harris that it was time to walk away after consecutive knockouts against Lucas Matthysse and Victor Ortiz last year. He obviously needed to prove it to himself, though. That proof came against prospect Jessie Vargas on Friday in Primm, Nev. Vargas looked sharp in the first and only round, battering his elder to the body and head. Harris’ performance was more striking, though: He did nothing. Why? Because he has nothing. He seemed to come to that unpleasant realization himself between rounds, when he told referee Joe Cortez that he didn’t want to continue. Harris should remember that moment when he considers whether to give it one more try. Enough is enough. Harris once held a major junior welterweight title. He had good career. It has to end sometime.

Maidana, about Morales: “I’d put him on the same level as (Amir) Khan. The only difference is that Amir is faster, but he runs. Erik didn’t run. He came to fight and he fought hard.” Maidana lost a unanimous decision to Khan in December.