Last Friday’s light heavyweight matchup between undefeated prospects Ismayl Sillakh and Yordanis Despaigne had more than just the potential of a good fight.

The commentators of ESPN2’s Friday Night Fights, which showcased the fight to a national U.S. audience, believed the 10-round bout could produce a top-10 contender.

Teddy Atlas figured the winner of the showdown, which pitted a Ukrainian amateur star against a 2004 Olympian from Cuba, could be ready to face a contender in the lower top 10 of THE RING’s light heavyweight ratings. 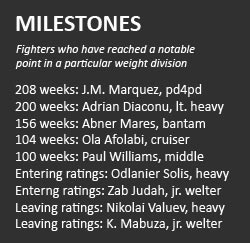 After Sillakh (15-0, 12 knockouts) dropped Despaigne in the second round and outclassed the more mature fighter over the distance, Joe Tessitore declared the 26-year-old Southern Californian worthy of a No. 5 ranking.

Not so fast, guys. While THE RING’s editorial board recognizes Sillakh’s undeniable talent and skill they believe the towering boxer-puncher is still another strong showing or two away from displacing the more accomplished light heavyweights in the lower top 10 of the magazine’s ratings, such as Karo Murat, Beibut Shumenov, Chris Henry and Gabriel Campillo.

“During ESPN2’s March 4 broadcast of Friday Night Fights, the broadcast team campaigned to get undefeated Ismayl Sillakh ranked following his decision over Yordanis Despaigne,” said Nigel Collins, Editor-in-Chief of THE RING magazine. “Although Sillakh looked impressive and will most likely be rated in the future, beating Despaigne was not enough to oust 10th ranked Gabriel Campillo, whose professional resume is still superior to Sillakh’s.”

The past weekend featured the continued development of one of the youngest RING-ranked contenders, a former champ’s return to the ratings, and a rated featherweight’s failed foray into a heavier weight class.

Heavyweights: Nicolay Valuev (No. 8 last week) exits after not fighting for approximately 16 months. His departure pushes up Alexander Dimitrenko (No. 9 last week) and Chris Arreola (No. 10 last week) one spot each, respectively, and makes room for Odlanier Solis to enter at No. 10.

“THE RING kept Valuev in the ratings past the normal 12-months of inactivity due to the fact he was injured, but it would be unfair to continue to do so at the expense of active fighters,” said Collins. “If and when Valuev returns to action, his past accomplishment at heavyweight will be factored in when considering whether or not to rank him again.”

Junior middleweights: Saul Alvarez (No. 10 last week) changes places with Cornelius Bundrage (No. 9 last week) due to greater activity, including his 12-round unanimous decision over Matthew Hatton.

Junior welterweights: Zab Judah returns to the 140-pound ratings at No. 7, thanks to his seventh-round TKO of Kaizer Mabuza (No. 7 last week) who departs.

Featherweights: “As Daniel Ponce De Leon fought at junior lightweight and his loss to Adrien Broner was close and controversial, the defeat did not affect his standing as THE RING’s No. 5 featherweight,” said Collins.