“I was online three weeks ago Sunday,” Steward told RingTV.com before a news conference to promote Cotto’s fight against Ricardo Mayorga on Saturday in Las Vegas on pay-per-view TV. “I saw one of those things: ‘Miguel Cotto at 17.’ I watched it and couldn’t believe it.

“If I didn’t see ‘Puerto Rico’ on his trunks, I would’ve thought it was Sugar Ray Leonard throwing combinations, dancing in and out.” 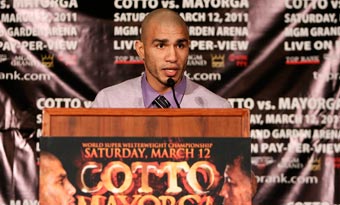 The next time Steward went to visit Cotto, the two of them watched the video together.

“Miguel told me, ‘Steward, that’s what I used to do,’” Steward said. “I told him he didn’t look anything like he has the past couple of years as a professional. He said, ‘Watch. I’m gonna go back and do more of that and still use my big punches.”

Cotto demonstrated better movement than he had in years during his victory over Yuri Foreman last June. The fighter and trainer agree we’ll see a lot more of that against Mayorga.

The result? Cotto won’t make a prediction, other than he expects to win, but Steward has said repeatedly that his fighter will knock out the bigger man within four rounds.

“We’re just trying to be the Miguel Cotto from the beginning,” said Cotto, referring to his earlier style. “That doesn’t mean will do something different. In my 10-year career, to try to change something now, put in something new, would be hard. That wouldn’t be the right thing for us.”

“It wasn’t a case of teaching him something new,” he said. “He just got so involved in being physically strong, overpowering his opponents with his left hook, particularly to the body, he got away from who he was.

“… I’m not saying he’ll be running around, just using better footwork, much like the Foreman fight. In the Foreman fight, he broke him down as much with his footwork and a solid jab as anything.”

Does that mean we won’t see much toe-to-toe action? Not necessarily.

And Steward believes that his fighter’s tight technique – vs. Mayorga’s will, looping punches – will be the difference in an entertaining fight.

“I think Mayorga will come in and crowd him, almost bully him,” Steward said. “That means he’ll have to open up a little bit. The fight will be explosive. I personally don’t see it going over four rounds based on the crispness of (Cotto’s) punches and his footwork.

“I know they get into some great exchanges. I believe Mayorga’s inability to throw short, accurate punches means Miguel’s punches will connect sooner. That’s why I think it will be an early knockout.”

In denial: A bold reporter asked Mayorga how he could expect to land a lucrative fight against Manny Pacquiao, which he has said he wants, when he hasn’t beaten an elite opponent in his prime in more than seven years?

To the reporter’s surprise, Mayorga went ballistic. And one of his handlers admonished the reporter not to treat the former titleholder with such disrespect.

The Nicaraguan’s last meaningful victory was a majority decision over Fernando Vargas in 2007 but Vargas already had begun to decline. Before that, Mayorga had back-to-back victories over a prime Vernon Forrest in 2003.

Bottom line: Mayorga is fortunate to be fighting Cotto on a large stage given his recent history. He’s in this position because of his mouth, which helps sell fights, not his record.

What’s next? Cotto, a professional if there ever was one, didn’t want to look beyond Mayorga. However, he acknowledged that he would like another crack at Antonio Margarito.

The Mexican stopped him in 11 rounds in 2008. Six months later, after Margarito was caught with illegal pads in his gloves and subsequently lost his license, speculation began swirling that Margarito must’ve also used loaded wraps against Cotto.

That has never been proved but Cotto remains convinced that he was the victim of foul play.

“The Margarito everybody saw after my fight was a different Margarito,” he said. “The (California) commission took off the loaded hand wraps and he got knocked out by Shane Mosley, a guy I beat. He had (one and a half) years out of boxing and doesn’t have a good fight (against Roberto Garcia). He won but doesn’t show good skills. Then everybody saw what happened with Pacquiao.”

So you’re sure he had something in his gloves against you?

Cotto was trained by his uncle in a less-than-tranquil camp when he fought Margarito. He feels good about his chances should they meet again.

“I have the correct team now to beat Margarito,” he said.